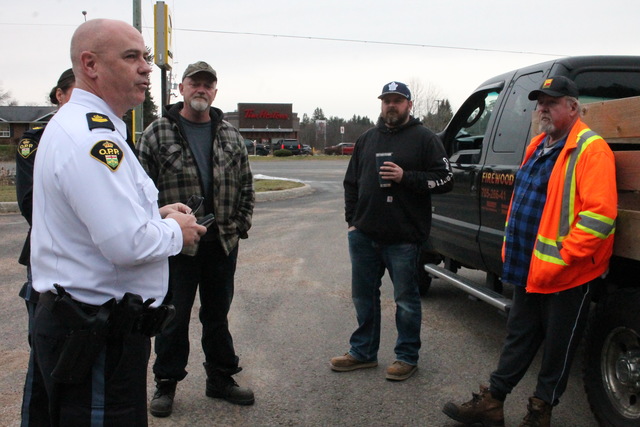 On Tuesday morning (Dec. 6), citizens joined the OPP in searching for a missing Minden Hills man.

John McNeil of Cottage County, All Ontario Road & Weather Watch on Facebook put out the call for volunteers.

They assembled at the Minden OPP detachment at 10 a.m. Dec. 6

“Just trying to locate him … making sure he’s safe,” McNeil said as helpers pulled into the parking lot.

McNeil said he thought about doing something Dec. 5 but on the morning of the 6th, “when I saw that this was the third day, it’s getting vulnerable, right?”

None of the search party knows McGee but recall seeing him around town. McNeil said he was told McGee was last seen on Rice Road Sunday night. “He pulled into a driveway so they called their neighbour, by the time they got out, he had backed out and was gone so they did search the property around that area Monday and no sign of him.”

OPP acting detachment commander Rob Flindell thanked the searchers for coming out. He noted they were not acting under OPP jurisdiction and advised them to not overstep boundaries.

“This is solely on your own accord. If you’re wishing to go out and drive down area roads that would be great.”

“Right now, Mr. McGee is mobile. He has his car. He could literally be anywhere. Like at this stage of the game, he could be in Quebec for all we know.”

Flindell said it is a vast area, from Haliburton County south to Kinmount, the City of Kawartha Lakes and Peterborough County. “There are a lot of offshoots, a lot of trails, a lot of roads and you could be turned around in any one of those and potentially stuck.”

He said OPP are concentrating their search by air and vehicle.

McGee is described as 5’10” tall, balding with short grey hair, grey beard and blue eyes. He was last seen wearing black boots with no laces, blue jeans, a white sweatshirt with the word “cutty” on the chest and a blue collared shirt underneath, a blue fleece jacket with a gold band across the chest, and an Ottawa Senators ball cap. The license plate of the car is BTSY 146.

“Hopefully, we can come to a positive resolution for the family on this,” Flindell said.

If you have had any contact with Joseph McGee, or have any information regarding his whereabouts, contact the OPP at 1-888-310-1122.