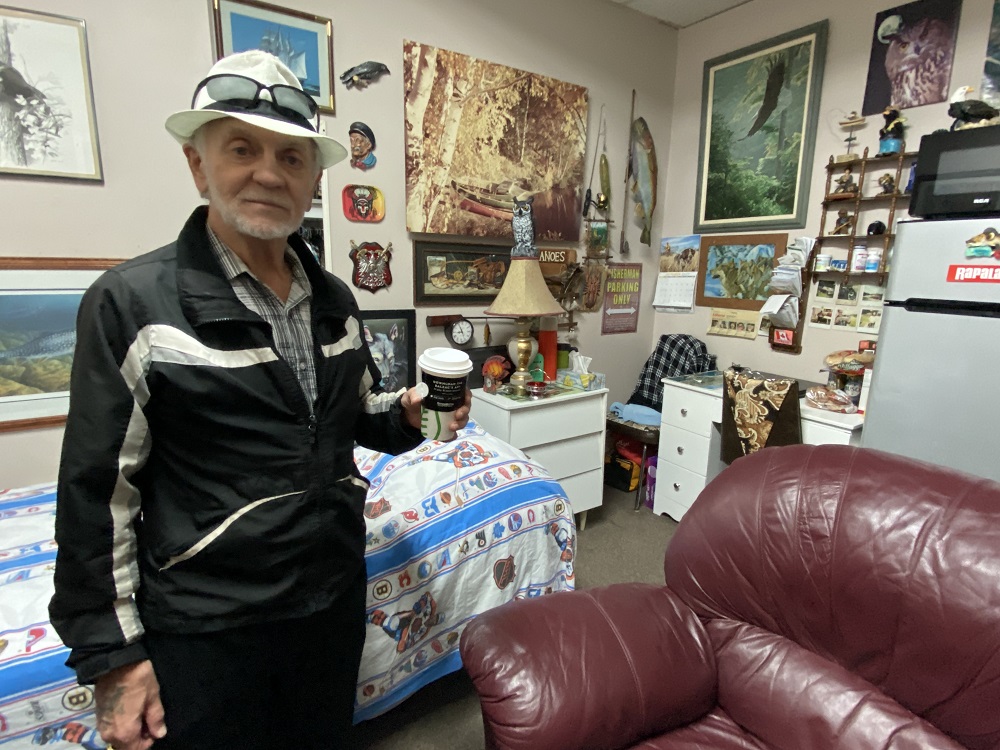 Nick Adams feels like he’s in a race against time to save the Rez in Haliburton village.

Located at 213 Highland St., the Rez provides housing to 15 vulnerable, at-risk people. Split into two sections, the space has two communal living areas, including kitchens, bathrooms and lounges, with 15 separate bedrooms. The building operated as a medical centre for years but was transformed into low-cost housing in 2009.

Adams has been involved in the operation since 2013. He started as part-time building manager, taking care of maintenance and helping residents whenever a problem arose. He became owner in 2017, serving as steward until November 2021, when he sold to a group of investors from Brampton, moving, with his family, to New Brunswick.

While Adams didn’t want to give up his stake, he felt he couldn’t effectively manage while out of province. He hoped to sell local, but interest was limited. After making the “difficult decision” to sell to someone from outside the community, he brought the buyers up to speed on how to run the place.

Things ran smoothly for the first couple of months, then Adams, who holds a second mortgage on the property, noticed the new owners started to default on some monthly bills.

‘There’s nobody in the community willing to step up’

“I knew things were amiss in February. I spoke to the pharmacist [at Haliburton Highland Pharmacy], who is the head of the condo corporation, and he let me know the owners hadn’t paid their condo fees,” Adams said.

Needing to cut costs, the condo corporation cut off power to the elevator that serves Rez residents. This caused a major problem for several with accessibility issues. Two months later, the owners started to default on the mortgage and were in arrears with Hydro One and the cable and internet provider.

The Highlander could not reach the existing owners for comment.

Adams returned to Haliburton in August, hoping to find someone willing to take on ownership and management. He moved into a spare bedroom and got to work righting many of the wrongs. He paid off a $16,000 debt with the condo corporation and settled all other arrears. All in, he estimates he put around $25,000 in, which he intended to recoup by adding onto his mortgage.

He couldn’t find a private investor so started to reach out to service providers in the community. Because of the way the building operates, as a cohabiting space, organizations such as Places for People and the Kawartha Lakes Haliburton Housing Corporation felt it was impossible for them to get involved without making substantial changes, something Adams wasn’t comfortable with.

With nobody coming forward, Adams decided to re-buy. He negotiated a deal with the current owners to assume the remaining debt of $340,000, providing he could get a mortgage. He is planning to meet with the Haliburton County Development Corporation Nov. 16 to try and secure a loan.

“I never wanted to own it and live away. It makes it hard if something goes wrong… but at this point I don’t have any other choice,” Adams said. “I can’t just walk away.

“I had built a good community while I managed this place, where people are helping one another. I want to maintain that,” he added. “The Rez is a real success story. We’ve got people who have lived here for years. We provide housing to the homeless, to people recovering from addiction. If we disappear, there’s going to be nowhere for these people to go. They’re going to end up on the street.”

There’s another stumbling block. The primary lenders have set a date of Nov. 21 to have a deal wrapped up. If Adams fails to provide proof of funds by then, the lenders intend to go to power of sale, which will authorize the lender to serve eviction notices and put the place on the market.

Adams said he’s working to meet that deadline. He is still looking for someone in the community to partner with, who will take an active role in managing the property. He plans to address Dysart et al council Nov. 22 to see what, if any, assistance the municipality can provide.

“Somebody has to have a heart for, and understand, the plight of the poor. The people here need that support. And it’s not just financial, there’s trauma issues, systemic issues that need to be chipped away at,” Adams said. “For me, the mission is not over.”

Residents would be in ‘big trouble’

Kevin Hadley has lived at the Rez for about three years. Prior to that, he was living in a trailer on a friend’s property in Gooderham, as he couldn’t find anywhere affordable to rent in the County.

He said the past 12 months have been “a nightmare,” with a lack of leadership taking a toll on the building. He says minor issues, such as the building’s washing machine breaking down, haven’t been addressed, and the general atmosphere and sense of community among residents has declined.

If Adams is unsuccessful in buying back the property, and it goes to power of sale, Hadley said he’d be forced to leave the community. He’s already making tentative plans to go to Toronto.

“I think I’d be OK. I’d figure something out. But I don’t know what some of these people would do. We have one guy who has dementia – he hasn’t got anybody left to take him in, to take care of him. He’d be in real trouble,” Hadley said. “This isn’t the best place in the world, but Nick takes care of it. He knows what’s needed. It sucks that he’s the one having to come back to save the place, but there’s just nobody in the community willing to step up.”