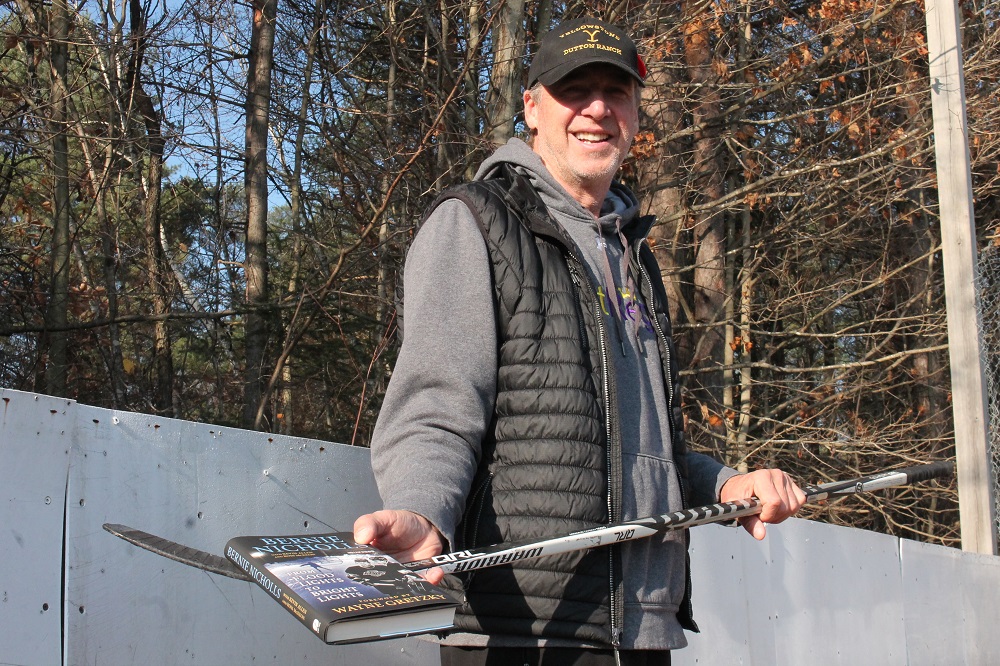 From growing up in a town of 75 people to playing in a city of 10 million for the NHL’s Los Angeles Kings, Bernie Nicholls has truly experienced everything from floodlights to bright lights.

Standing in the field behind the West Guilford Community Centre, he points out where the outdoor rink used to be, to the left of where it now stands. There used to be some towering pines, but they came down in a storm. The ice was flooded with water from the lake, and it was lit at night, just as the outdoor rink at his parents’ home was.

Nicholls shows the cover of his new autobiography, From Floodlights to Bright Lights, released Nov. 1. Published by Triumph Books, it was co-authored by Nicholls and Ross McKeon, with help from Kevin Allen. It features a foreword by Wayne Gretzky.

The cover has a floodlight in the top left-hand corner, with a kid skating on an outdoor rink with snow for boards. There is a Hollywood sign in the top right-hand corner and Nicholls and former linemate Gretzky celebrating a goal in their black and silver Kings’ uniforms.

The book is about his life on and off the ice, from his childhood in Haliburton County to a 70-goal season in L.A., and all those cities in between. It also touches on more recent times, coaching and retirement and coming full circle with a return to living in the Highlands.

Nicholls said the idea for a book emerged prior to COVID. However, much of the work was done during the pandemic.

“We just did a lot of Zoom calls because we had nothing but time,” he said.

He started chatting with McKeon, a San Jose hockey writer. McKeon put stories together but he, Nicholls and Triumph thought they needed a little more storytelling and emotion, so brought Allen onboard.

Describing the process, Nicholls said it was not difficult for him to discuss “some earlier times and dark places.” For example, he and his wife lost a one-year-old son. He said his biggest problem was remembering a lot of his past since he has suffered concussions.

“I know they (McKeon and Allen) talked to a lot of different people, including family, that either reminded me or could tell their stories,” he said.

Nicholls said after his concussion in 2000, he forgot a lot about his career and taking his mom and dad to different games in various NHL cities.

There was plenty of material, he noted. “Growing up with 75 people and having the opportunity to play outdoors as a kid on frozen ponds, just the little things that city people would not even know, couldn’t even understand,” he said.

He added for him the greatest thing about playing in the NHL was the opportunity to take family and friends across North America and expose them to experiences they would have never had otherwise.

He recalls taking Gary Brohman and his sons to a Chicago Bulls game, where they got to meet Michael Jordan and Dennis Rodman. “Gary still tells the story and it gets better every time,” Nicholls says with a chuckle. His aunt got to meet John Candy in Toronto. Others got to meet the Great One.

He said he is proud of the book and tears up, admitting “I think the joy that I brought to my mom and dad, that does it for me. And my brothers and sisters. Just the stuff that I allowed them to do and the places I allowed them to go. The joy they had. That means everything to me.”

It’s also a chance for his twins, a boy and girl, to learn more about their dad in the early years of his hockey career.

“The good and the bad,” Nicholls says of his story.