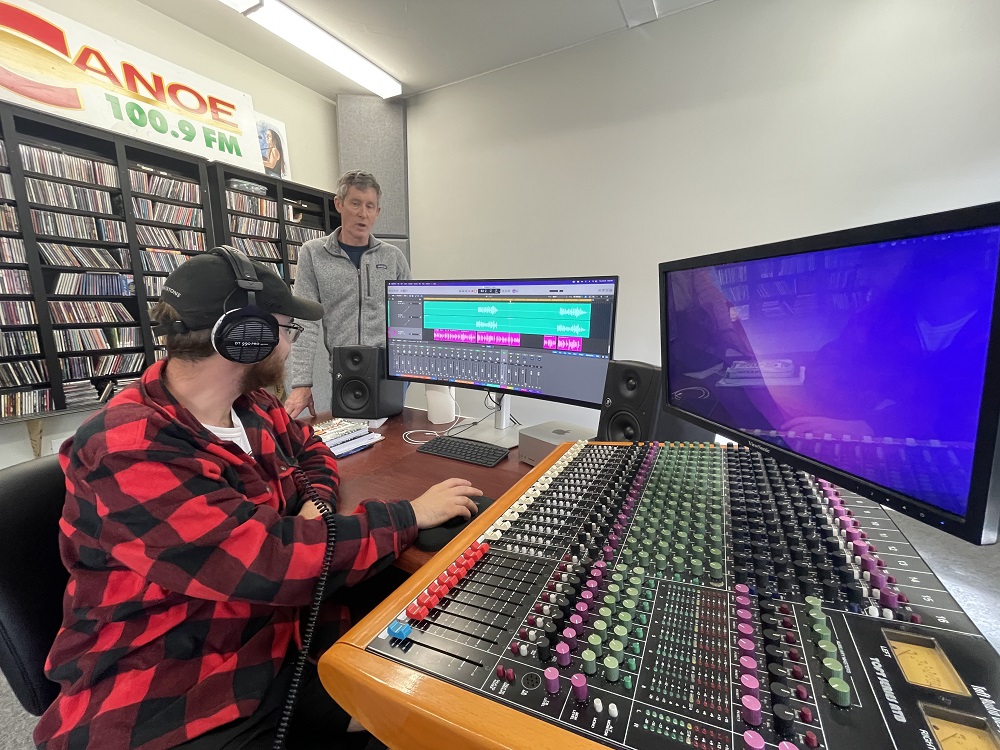 In a newly-renovated CanoeFM studio, Marcus Thompson powers up a curved computer monitor and waveforms of sound snake across the screen.

Beside him, a control panel is clustered with knobs and dials, ready to tweak and finesse music and voices soon to flow through nearby microphones.

The radio station is ready to launch its new recording studio, staffed by Thompson, aimed at capturing the Highlands’ audio talents in high fidelity.

“It’s really exciting to see it because it started out as an idea,” said station manager Roxanne Casey. “And now we’re here.”

Paul Vorvis, chair of the CanoeFM board of directors, originally came up with the concept more than two years ago.

“Part of our mandate is to focus on local musicians,” Vorvis said. “And a lot of local music wasn’t produced to reflect the talent as well as it could be. So, we wanted to fill that gap, give [Highlanders] the opportunity to develop their career.”

With radio booths broadcasting across the County just down the hall, local songwriters, musicians and even theatrical enthusiasts will have ample chance to promote their work, too.

“It’s providing them a first-class facility where they could record… combine it with featuring their music on air as well, plus we can distribute it across the country,” Vorvis said.

CanoeFM is part of the National Campus Radio Association, which broadcasts shows on its national network.

Casey said it will be a low-cost way for people to share their work.

“There are people that do great production work in Haliburton County. But not everyone can afford it… so we’re hoping young people, especially, take advantage of what we’ve got here.”

Anyone coming into the studio will work with Thompson, a local musician who studied sound design along with music in post-secondary.

“The first step is meeting with people and discussing what their goal is and what kind of project they’re trying to do,” he said. After that, he’ll guide people through the process of recording, editing, and publishing music or whatever they want to record. His focus will also be on equipping Highlanders with the skills to edit and record themselves.

The studio will be put to use for the first time shortly, as the actors from Radio Playhouse record Shattered, a drama based on the 1917 Halifax explosion.

A grant from the national community radio fund enabled the station to hire Thompson, however anyone who has played radio bingo helped fund the studio’s professional-level computer and recording equipment.

“Everyone that plays radio bingo has supported this studio,” Casey said. She invited them all to come check it out.

“I would hope that they’ll come in and they’ll realize what kind of an opportunity this is for people… come and see what we do, or maybe even take part in it; train or learn.”

To find out more about booking studio time, contact Thompson at marcus@canoefm.com