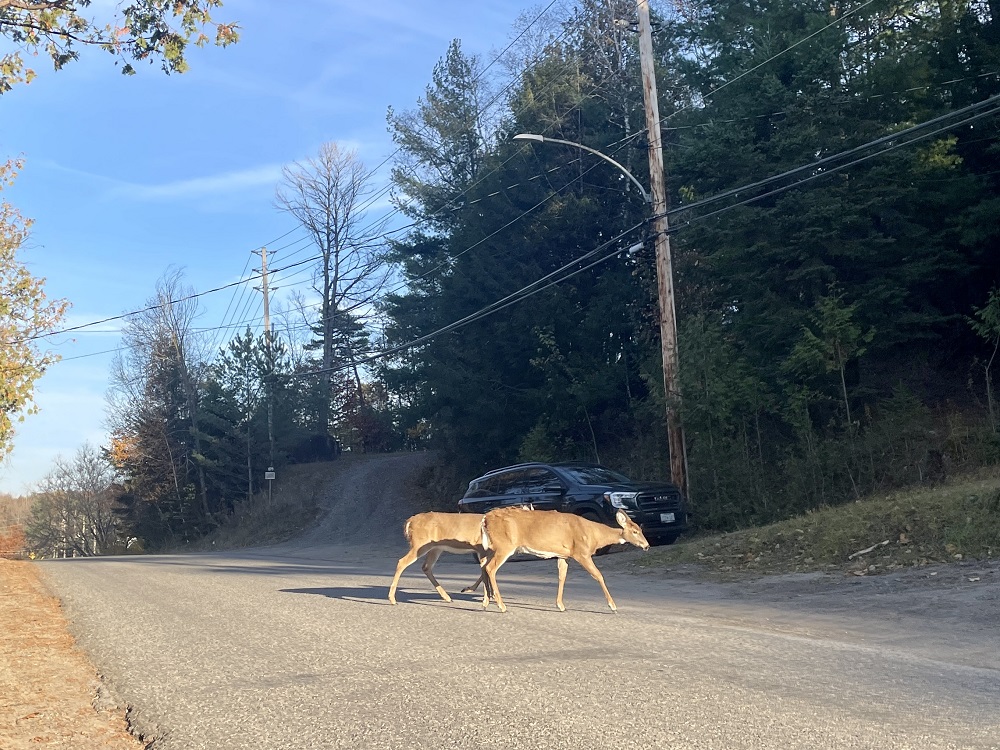 The Ontario Provincial Police estimate there are about 12,000 deer and wildlife collisions each year in the province.

An Oct. 24 press release estimates approximately 400 people are injured in these collisions each year. Those statistics may hit close to home for many Highlanders who encounter wildlife on their daily drives.

Dozens of deer, for instance, regularly graze in Haliburton village. Some are hit by passing cars. Monika Melichar of the Woodlands Wildlife Sanctuary said six fawns have come through the healing centre this year.

Melichar said areas such as Hwy. 118 near Sunnyside Street, or across from the high school, are especially dangerous, due to the deer’s habit of crossing roads to find water.

“They’re crossing roads more often than normally would be the case for them,” Melichar said. “A normal deer in a normal situation might cross the road once or twice a day at the most. Whereas in Haliburton, they’re crossing them all the time.”

She said deer acclimatized to urban environments are more likely to be hit since they become more comfortable around cars and people.

She said the combination of safety, a lack of coyotes or other predators, and human-provided food make Haliburton village a prime location for deer currently bulking up for the winter months.

“They’re not naturally browsing because there’s an abundance of food in Haliburton. It’s like there’s a buffet of restaurants from one house to the other.”

Melichar said as well as encouraging deer to cross busy roads, much of what residents put out is not healthy for deer. She describes apples and corn as “candy” to deer: providing sugar but not much protein. Deers’ stomachs change depending on the season. In the winter, their diet switches to rely on more fibrous plants, while they feast on lush plants and grasses in the summer. Feeding deer food they aren’t used to eating can have disastrous health consequences.

An abundance of unhealthy food can also lead to hoof and antler abnormalities. It can also increase the likelihood of disease. Deer congregating in areas such as Haliburton village are more likely to spread disease among themselves due to close proximity or nose-to-nose contact.

She said a solution for those who want to feed deer in a more sustainable way could be to partner with a landowner farther from busy roads, and ensure feed is made up of grains and high-protein ingredients, with minimal corn.

While limiting the feeding of deer is likely to decrease their numbers in Haliburton or other urban areas, all of the County’s roads carry the risk of critter crossings.

The OPP provided the following tips for drivers to avoid hitting deer and wildlife:

• Pay extra attention in areas where wildlife signs are posted. These areas have a high frequency of animal crossings.

• Monitor your speed. By obeying the posted speed limit, you increase your reaction time and decrease your vehicles braking distance – helping you avoid a possible collision.

• Be careful at the ends of fence lines. Animals may be following the fence line and looking to cross the roadway at their first opportunity.

• Be alert at all times. Scan your surroundings constantly and look ahead as you drive. It is common for animals to wait alongside the roadway or in the ditch, prior to crossing.

• Use your high beams when possible and look for the glowing eyes of animals.

• Never swerve suddenly. This can cause you to lose control of your vehicle or head into oncoming traffic.

• Brake firmly but maintain control of your vehicle if you see an animal standing in or crossing the roadway.

• Deer rarely travel alone. If you see one, there is a good chance there are more.

Melichar adds that animals such as deer are most active at dawn and dusk.

If the worst does happen, motorists who hit large animals such as deer should report the collision to the OPP Woodlands Wildlife Sanctuary cannot tend to adult deer, but can take in fawns or other animals that are hit.

Melichar said animals that are hit will often recover on their own. “If they can walk away on all fours, they’re likely fine,” she said.