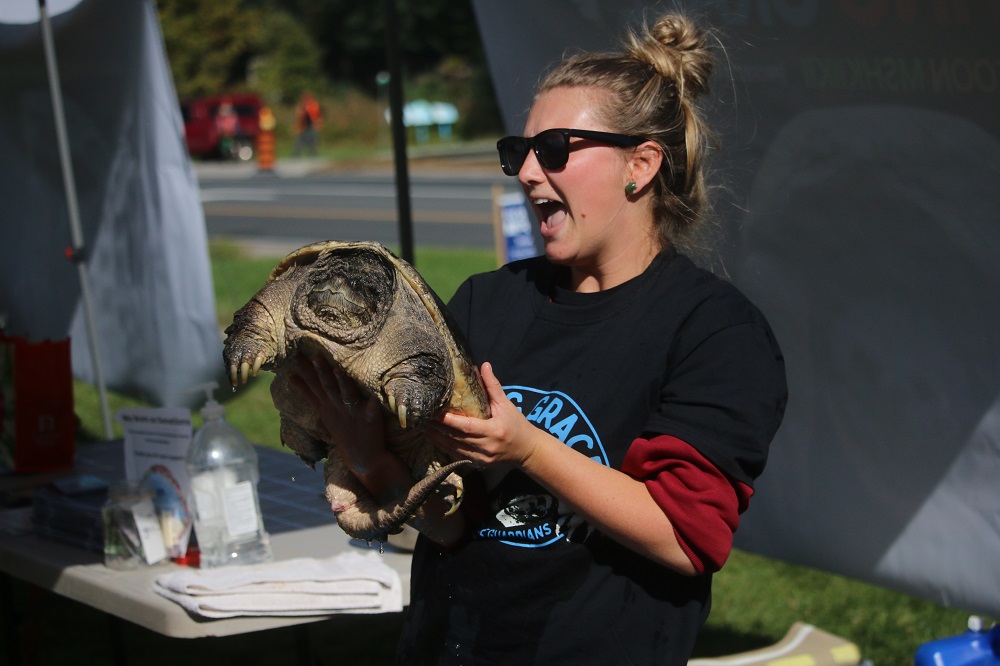 It was a sombre morning on the playing fields at Haliburton Highlands Secondary School (HHSS) Sept. 24 as more than 100 people commemorated the life of Grace, a 125-year-old Snapping turtle who hasn’t been seen in almost a year.

Organized by The Land Between and Turtle Guardians charities, the Saving Grace event was designed to shine a light on perceived shortfalls in municipal policy in Dysart et al, which, according to Leora Berman, last year led to the filling of wetlands near the school where she believes several turtles, including Grace, were hibernating, likely burying them alive.

Berman has spent months calling on council to strengthen protections for wetlands designated as environmentally protected (EP) zones. While Dysart does have a policy in place recognizing EP zones, there is currently no enforcement.

“They just seem to ignore us,” Berman said. “The Grace story has gotten over 100,000 signatures [on a petition], but this municipality still has not passed the correct provisions under their EP zones… There is no protection.”

At a meeting in May, council indicated they see this as a County-wide issue and could even fall under the parameters of the new shoreline preservation bylaw. Director of planning and land information, Jeff Iles, was directed to review the bylaw and report back on how it could protect Dysart wetlands and EP areas.

In a follow-up email with The Highlander, Iles said “I think every[one] agrees that council, along with all councils in the County, have recognized the need for legislation and are currently working on a County-wide site alteration bylaw to address these issues.”

Berman doesn’t believe piggybacking off the shoreline preservation bylaw is the answer. “It does protect shorelines of wetlands, but it doesn’t cover EP zone sites,” she said.

Amy Semple made the trip from Peterborough to attend. A volunteer with the Ontario Turtle Conservation Centre, she said Grace’s story struck a chord with her when she learned about her disappearance earlier this year.

“I think it’s important that people come out and show their support for causes like this. There are a lot of people here today. This isn’t just about one turtle, it’s about the whole environment that we’re bulldozing through and changing forever,” Semple said. “Grace is a symbol of what’s happening everywhere. We need to have better regulations to ensure our wetlands, our animals, are better protected.”

Representatives from the Turtle Island Conservation program at the Toronto Zoo were also on hand to show their support.

For Berman, the fight continues. She vowed to continue lobbying for better protection of EP zones and announced plans for a commemorative statue of Grace, which she hopes will one day be installed on the shores of Head Lake, “so that people always remember what we’ve lost.”

“Today’s ceremony, some people have called it a funeral, and it could be. If Grace is lost, and we really fear she is… we don’t ever want to see this happen ever again,” Berman said.