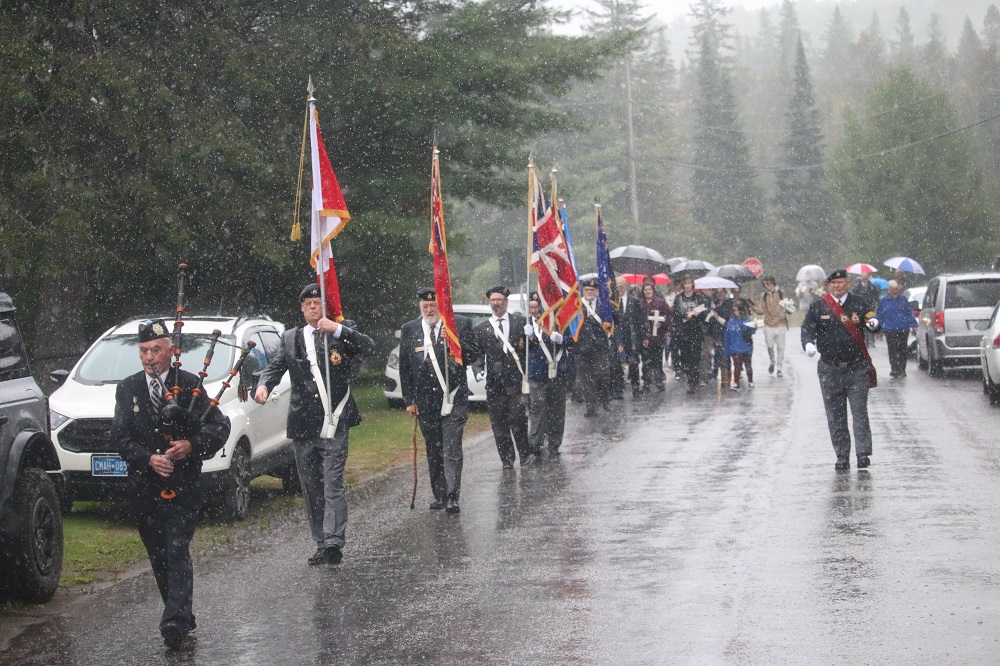 While Remembrance Day is still a couple of months away, members of the Haliburton Legion partnered with a leadership class from HHSS this week to commemorate the community’s fallen veterans.

The legion held its annual Decoration Day at St. Anthony’s Roman Catholic cemetery and Evergreen cemetery Sept. 19, with around 50 people, including 23 high schoolers, braving the elements to attend.

Now into its fifth year, the event has become a staple of the local legion’s fall program, said president Don Pitman.

“It’s important for our legion to recognize those that have served over the years. This is a great opportunity to leave a visual marker so that when people come through the cemetery, they will realize that these people served with distinction and, in some cases, made the ultimate sacrifice for their country,” Pitman said.

Teacher Paul Longo said it was “an honour” for HHSS to be involved in the event. Grade 11 and 12 students have been taking part since 2018. They attend the opening ceremonies and then take crosses provided by the legion and place them beside grave sites.

This year, students placed 146 crosses honouring veterans who served in the First and Second World Wars and in the years since.

Kamryn Holden said she learned a lot about respect by participating in this year’s event.

“It’s very enlightening. It adds a whole other element to remembrance for me,” Holden said.

Jesse Bascevan, in Grade 12, helped to lay 14 crosses during a wet morning at Evergreen. He said he appreciated learning about the veterans, many of whom gave their lives so future generations may prosper.

“Some people may not see this event as important at all – like, why would we go to graves and put some little crosses down? It’s about giving respect to people who did things that I don’t think many would [be prepared to] do today,” Bascevan said. “We need to remember these people and the sacrifices they made for our freedom,” said Landon Chaulk. “If we don’t, then history is going to repeat itself and their sacrifices will have been for nothing.”