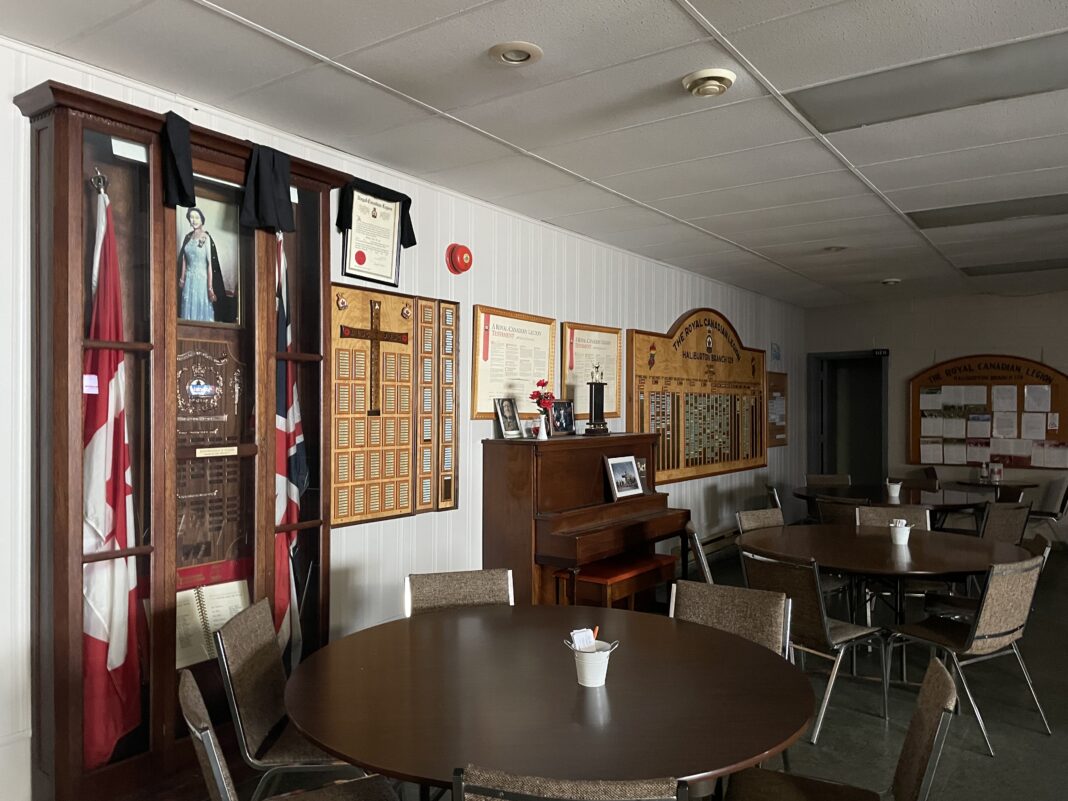 On Sept. 7, members of the Minden Legion sang God Save The Queen as legions across Canada have for 70 years.

They didn’t know it would be the last time they sang that song. On Sept. 8, Queen Elizabeth II died at the royal family’s Balmoral Estate.

She was the United Kingdom’s longest-serving monarch. County residents and local organizations are now marking the passing of Canada’s former head of state. “It will be different for us, and it has affected us,” said Wendy Bolt, president of Minden’s Royal Canadian Legion Branch 636.

Legions, and everyone else who sings the British anthem, will now sing God Save the King.

“She represents history for me, royalty and history for Canada,” Bolt said. “The Queen represents stability for all of the British Commonwealth.” The legion placed a black shroud with poppies below a picture of the queen. Flags at all legions will fly at half-mast until the day after Queen Elizabeth II’s funeral.

“I never met the woman but I’m personally feeling a loss, which is interesting,” said Haliburton branch president Don Pitman.

“She always seemed to look for the common ground, from what I can see.”

Hope Thompson, a County resident, recently found out her grandfather helped out on the train that carried the Queen across Canada during her 1959 tour.

“It was interesting to see how a little piece of our family history intersected with a larger moment in Canadian History,” she said, adding that the Queen’s death felt like it “closes a door” on an era.

“She was a person who had a connection with the past century.” County residents Sharon Foster and Dan Sullivan were in England visiting family when the Queen died. “… It felt like I had been called home to say goodbye,” Foster said in a message. “Strong emotions for me and so many UK citizens as we say farewell to the Mother of our great nation.”

Peter Walford-Davis might not have seen the Queen if not for an Edinburgh stoplight. While located in Liverpool through much of the war, he was living in Edinburgh with his family when the German army surrendered.

“Instead of hearing air raid sirens screaming at us… or the strange throbbing sounds of the Luftwaffe, we heard birds… the laughter of children,” Walford-Davis said.

He and his family took part in nationwide celebrations in the city. They were at a stoplight that day, waiting to cross the road. It was then the royal limousine passed by carrying King George and his family.

Princess Elizabeth looked out the window and met Walford-Davis’ eyes. She smiled. The traffic light changed, and she moved on. “From that particular evening when we met to the time she passed on, she was always a part of my life,” Walford-Davis said. “She was my Queen. To hear she had passed on, I was sad … at the same time she deserves the peace for all her years of service to the people. Not only the Commonwealth, but the world.”

Dozens of other Highlanders, such as Roxanne Casey, have memories of the monarch. Her grandmother was invited to the Queen’s garden party, and Casey still has the invite. “I keep it safe and in my china cabinet, my grandmother was so honoured to have been a guest…” she said. Haliburton-Kawartha Lakes-Brock MPP Laurie Scott also has a first-hand connection to Queen Elizabeth II.

Scott met the Queen with her father, long-serving MPP William Scott, in 1982 at the proclamation of Canada’s constitution. “It was kind of overwhelming. I was kind of nervous,” Scott said.

Ever since, the experience has remained crystal clear.

She still has the gloves she wore to the event. Scott was in Ontario’s Legislature, Queen’s Park, when news of the Queen’s death became public on Sept. 8. “It was like nobody knew exactly what to do, it hasn’t happened in 70 years,” she said. “You could see officials checking about protocol… question period was continuing.”

Legislature was adjourned after the Queen’s death and will resume next week.

Scott said she feels “heartbroken” about the news. “It was very emotional; it was like a member of your family has passed.” She said Ontario’s governmental centre was also a poignant place to receive the news. “It’s a moment in time you’re never going to forget, [we were] in a place of democracy, which she was a big defender of,” Scott said.

Federal MP Jamie Schmale also released a statement Sept. 8. “On behalf of the constituency of Haliburton-Kawartha Lakes-Brock, I would like to extend my sincere condolences to the members of the royal family, and people of the Commonwealth,” he said.

King Charles III will now serve as the United Kingdom’s monarch and Canada’s head of state.