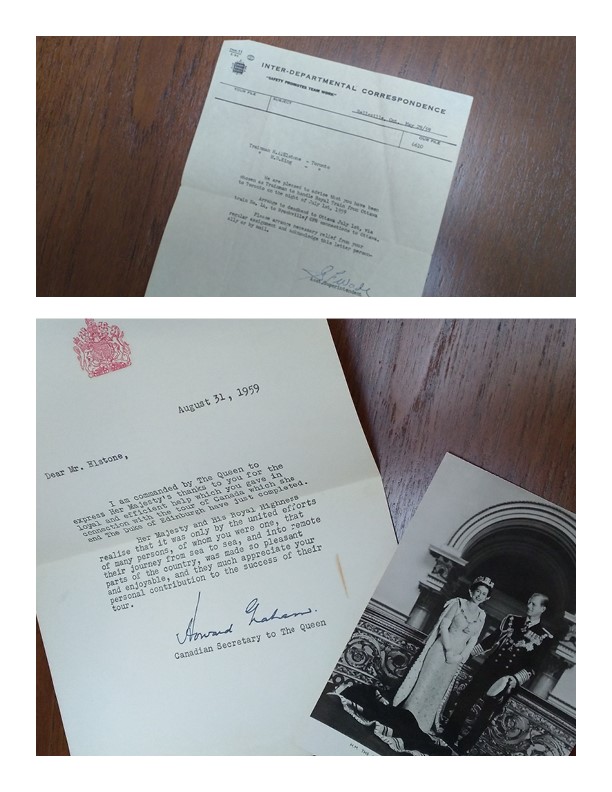 My sister finds some old letters while cleaning out our parents’ possessions collected over 60  years of marriage. Some of the possessions, like these letters, belonged to our grandparents and ended up mixed in with the piles of things that were looked at once, deemed too important to discard, and never looked at again until now. Written in the spring and summer of 1959, the letters are addressed to “Trainman H. A. Elstone.” Three are from officials at the Canadian National Railways, and one is from a representative of the royal family. Slipped inside this letter is a photograph of Queen Elizabeth and Prince Philip.

Harry Anthony Elstone was my grandmother’s second husband. A child when they got married, I have only dim memories of Harry. I was surprised to learn that he was both a brakeman for the Canadian National Railways, and that he played a role in the 1959 royal tour.

The job of the brakeman is to set the train’s brakes, oversee switching tracks and lines, and to be an extra pair of eyes on the tracks. There’s a brakeman at both ends of a train but the letters indicate that Harry was at the head of the train. On July 1, 1959, and after Dominion Day speeches at Rideau Hall, Harry Elstone was the chosen brakeman on the train that transported Queen Elizabeth and Prince Philip from Ottawa to Toronto, arriving at 10:05 p.m. at Union Station.

The tour was designed around the official opening of the St. Lawrence seaway and was the longest Canadian royal visit to-date, lasting a grueling 45 days starting in late June and finishing in early August. No doubt making matters worse was the fact that Queen Elizabeth was pregnant with Prince Charles, a secret which was only made public upon her return to England.

The royal couple visited every province and territory and attracted cheering crowds along their cross-country route. Sixty-three years later and much has changed in the world, including for the royal family and the commonwealth. During their recent Caribbean tour, Prince William and Kate Middleton faced more protestors than pleased crowds.

What interests me is, if Harry, who was born in Haliburton, was working on the royal train in 1959, when did he return to Haliburton and marry my grandmother? No one in my family remembers the year, let alone the precise date of their marriage, and the memories they do have are contradictory. I contact the Anglican Diocese Archives and a few days later, I get a call from an archivist who finds a notation in a Vestry Book. On Oct. 1, 1971, a nuptial eucharist service was conducted at St. George’s Church in Haliburton village. Twelve years after performing his duties on the royal train, Harry married my grandmother, Agnes Appleby.

I know more of her side of the story. Agnes moved to Haliburton with my grandfather in 1959 (coincidentally, the same year as the royal visit) and moved into a little white house on Highway 121 (now County Road 21) just west of the village of Haliburton. The house was next to a Jehovah’s Witness Kingdom Hall, which has since moved across the road, and closer to Minden. Agnes was a nurse and worked for the Victorian Order of Nurses and drove around the County in an orange Buick Skylark providing outpatient services. A few years after my grandfather died, Harry and Agnes met and married—and lived together in the same little white house.

Both are long dead now but walking in the Evergreen Cemetery on Haliburton’s Pine Street, I locate Harry’s gravestone and am surprised to discover that he died on Dec. 1, 1971—only two months after he married Agnes. The gravestone states that Harry was the “Beloved Husband of Agnes Appleby.” He was 63 when he married my grandmother and I wonder if she was his first wife. Despite their short time together, I am happy they found each other.

From the honour of being a chosen brakeman on the royal train to finding love late in life, the letters fill in some of the gaps in the story of my family in Haliburton and provide a window on events both personal and regal, from over half a century ago.

NB: If anyone can contribute more information to this story, I would be happy to hear it.