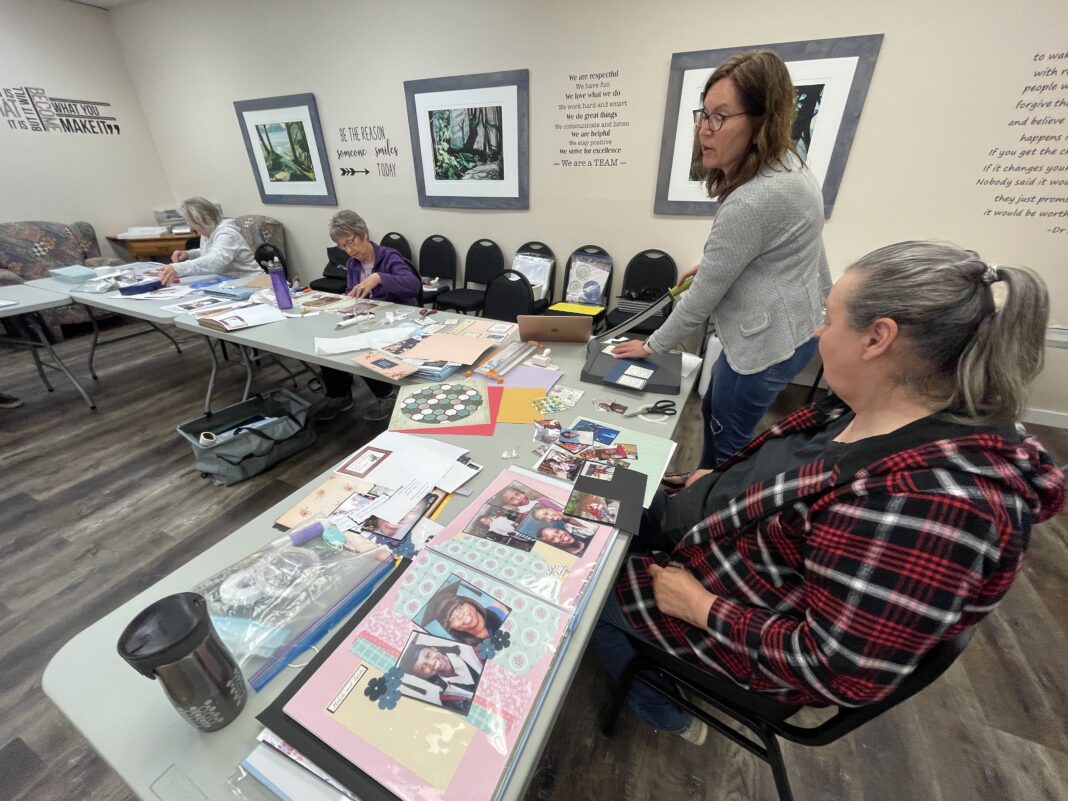 This spring five women carefully re-constructed memories retold by seniors across the Highlands. From March to June they have used scissors, tape, colourful paper and dozens of photographs, not to mention hours of conversation, to craft personalized books about seniors they’ve been getting to know.

The volunteers were part of SIRCH’s restarted Memories to Life program, which is set to run again this fall.

The program is intended to provide people with visual and written cues that may spark memories about their lives, said Jan Saugh, SIRCH’s coordinator for senior wellness.

The volunteers gifted the books of memories to the seniors and their families this summer. But for those involved, Memories for Life is much more than a simple scrapbooking exercise.

“It’s an honour to know someone’s life story, for them to start opening up about things that they themselves have gone through,” said volunteer Vanessa Ianucci. Sitting beside four other volunteers scrapbooking in SIRCH’s meeting room, Ianucci said she’s realized the stories of older Highlanders may not always have been cherished in a way they deserve. Margaret Ross, sitting across from her, agreed. “They think ‘everybody did it, it doesn’t matter’,” Ross said as she arranged photos on a pink scrapbook page. “It matters. They changed laws, they changed lives, they stopped wars.

They don’t see it that way until they stop and think about it.” Ross has been assisting Jane Braithwaite, who lived across Canada before calling parts of Haliburton County home. She’s now living in Peterborough. “Going back over my life I sort of looked at a lot of things I had forgotten I did,” said Braithwaite. “I usually deflect, I usually talk about other people.” Braithwaite said she’s been a “rolling stone.”

She was born in a family with a strong tradition of social justice advocacy. Her father was responsible for banning the book Little Black Sambo from Toronto schools, and her mother came to Canada from the U.S. through the Underground Railroad.

Braithwaite herself has a long career in education and educating students and her community about social justice issues.

“When I really had to stop and think about my story, it was an eye opener. I have done a lot of things I probably don’t think about. People do value some of the material I share,” she said.

She later added that working with Saugh was an easy process after initially being unsure about how the Memories for Life project would unravel.

As for Ross, her volunteer scrapbooker? They’ll likely keep in touch, she said. “We’re on the same wavelength.” The volunteers have developed a bond too. They share laughs, help each other out with photocopying and design and chat constantly while working hard on their scrapbooks.

“What I like is it’s a chance to be nosey,” said Dianne Williams, prompting chuckles around the meeting room. “You get to ask a bunch of questions.”

During meetings with her storyteller, she’d go into the closet and pull down boxes of pictures. They’d leaf through them together, the elderly woman pointing out important people, places and times in her life. “She loved looking at them, and telling the stories.

Seniors don’t often get to do that, especially if they live alone,” Williams said. Other volunteers describe the way their storytellers reveal their history in “layers,” like an onion. One gentleman said his life wasn’t too spectacular, but after some questions, Wendy Ladurantaye unpeeled a different side of the story.

She found out he travelled around the U.S., Europe, and sang in a world-travelling choir. Some participants, and Saugh herself, are now considering how they want to pass their own stories along. “I have a granddaughter now. I want her to know who I am, not just a picture in a book, not just fond memories,” Saugh said. “I want to tell my story for future generations.” For more information on Future Memories for Life sessions, email jan_saugh@sirch. on.ca