John Smith is bowing out of municipal politics after a single term as Ward 4 councillor in Dysart et al.

It’s a decision Smith says he has been debating for several months but, after more than 50 years working in a variety of high-demanding roles, feels the time is right to step away and “embrace the life of a retiree”.

“I’m turning 70 later this year, and I just think it’s time. I’m looking at this as a bit of a life milestone,” Smith said. “I’ve always had jobs, often big jobs, and having spent 50 years reading reports, assessing situations and trying to solve problems, I thought ‘let’s try something different for a change’.”

Looking back over his four years in office, Smith said there’s a lot for him and his fellow councillors to be proud of. He believes Dysart’s recently adopted strategic plan will provide a solid foundation for the township’s next elected representatives, outlining municipal priorities and goals for the years ahead.

He’s also pleased to have overseen greater investment in roads during this term.

“The service that most people think is critically important is roads. People want a decent road to drive on when living in or coming to your community… That was something I know I wanted when I first came here 20 odd years ago as a seasonal resident,” Smith said. “We’ve made some progress there. We’ve gone from spending around 31 per cent of our budget on roads to north of 33 per cent. Our roads are getting better, and there’s a plan in place, through our asset management plan, for that to continue.”

He’s already planning a road trip to the east coast next summer.

There are currently two people vying to fill the soon-to-be vacant seat in Ward 4, with Ron Evans and Hayden Hughes confirmed as official candidates. The cut-off date for nominations is Aug. 19 at 2 p.m. Along with Smith, incumbents Andrea Roberts, Pat Kennedy and Larry Clarke have announced they won’t be seeking re-election, while Nancy Wood-Roberts has yet to file her paperwork. Tammy Donaldson is seeking re-election in Ward 3, currently unopposed, while Walt McKechnie is running for deputy mayor. 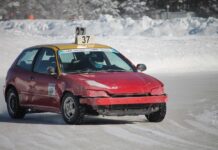 From Trump to racoons at Stanhope Airport