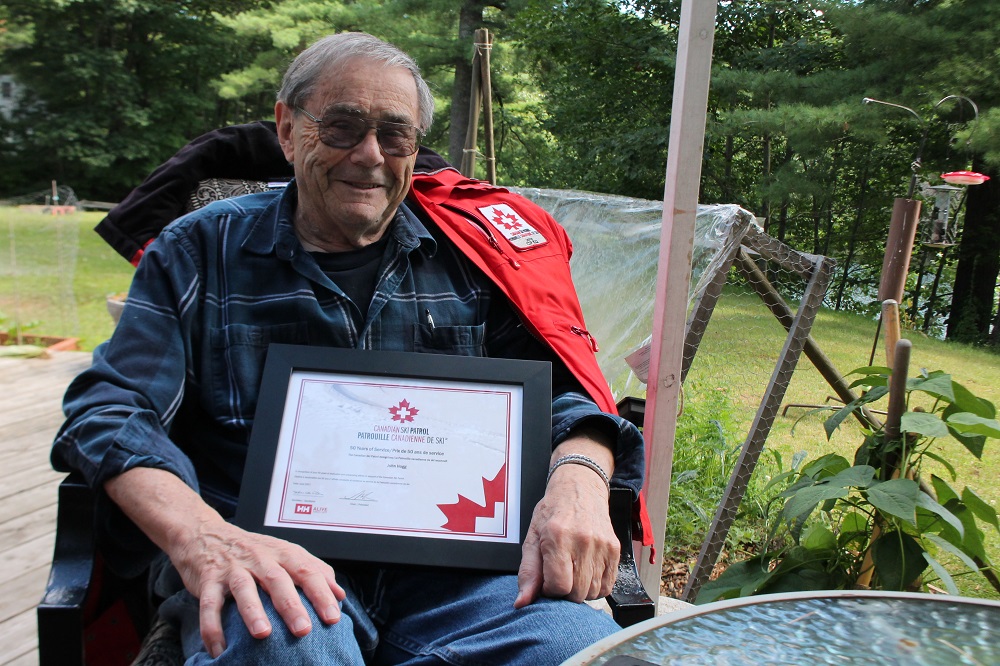 John Hogg didn’t strap on downhill skis until well after he graduated university, but the late bloomer has marked 50 years of service with the Canadian Ski Patrol.

Hogg joined the volunteer ranks at Sir Sam’s in 1971, when the late Bob and Noreen Bishop owned the Eagle Lake ski hill.

Hogg acknowledged it is somewhat ironic that he only took up the sport a few years before starting patrol.

“Luckily, I could ski adequately,” he says, adding because he didn’t start skiing as a child, he doesn’t have the touch or balance that lifelong skiers do.

“I can still ski because I can still stand up,” he adds with a chuckle, noting he has a bad back that limits outdoor walking on uneven surfaces. He keeps fit by hitting up the treadmill and bicycle in the S.G. Nesbitt Memorial Arena and Community Centre fitness room.

He was living in Toronto when he first took up downhill skiing and started patrolling in southern Ontario. But his first wife’s family had a cottage on Maple Lake, so Hogg began to hang out at Sir Sam’s in the early 70s when it just had a T-bar and a few slopes. Up to that point, he hadn’t gotten involved in much in the community.

At the ski hill, “I recognized how nice people were… and I assume it was a latent first responder instinct or something,” he said of his decision to join locally.

“I really liked skiing and the people were great. So, it was fun. At that time, the social life in the 70s was somewhat looser.” He said the ski family worked hard and played hard.

While he was not the best skier, he was trained to ski under control and do things such as take a toboggan safely down the hill with an injured skier onboard. And he knew First Aid.

It was a different era when he started as skiers flew down the hill without helmets and their skis didn’t detach when they fell, as they do now that bindings have improved.

“If you fell, it wouldn’t detach or even if it detached it was tied to your leg so it would be a windmill effect.”

He estimates there were 100 injuries a season and a fair bit of blood.

“If you fell down, you were going to break something. There were head injuries. We had people who stopped breathing.”

He said the ones that stood out the most were when people were in a lot of pain and screaming. “One girl broke her femur right at the top of the hill and back then you didn’t have the equipment to totally immobilize it so she was in pain all the way down.”

Asked about post-traumatic stress disorder (PTSD) from ski patrol, he said his wife, Julie Chadwick, tells him he is cranky and has PTSD. However, after years as a Stanhope firefighter, Hogg said, like many EMS, you are trained to be a first responder. He said you have a job to do and you do it, although you have memories of some accidents.

In addition to being a ski patroller, he has been a patrol leader, trainer, and been on volunteer boards with the Kawartha Lakes and provincial zones.

He marvels at the diversity of ski patrollers, coming from all walks of life and age groups.

“You can’t like everybody, but, wow, they have a range, an occupational range, doctors, engineers, teachers, management, to teens. And, yes, they know how to party but they also just do things so well. I am more than happy to be part of Canadian Ski Patrol and Sir Sam’s.”

Did he think he would make 50 years when he started out?

“No thought of that at all. It was very much in the moment. I get a lot of satisfaction out of what we achieve.” He said he and other ski patrollers know they have an important and necessary job.

He recalled how the Bishops, “always, from day one, loved the patrol. Noreen said she never felt comfortable until a red jacket showed up so they could open.”

The colour of those jackets has changed over the years, but Hogg’s commitment has never altered.

“I never know when to quit … if I’m doing something and I like it, why not?”