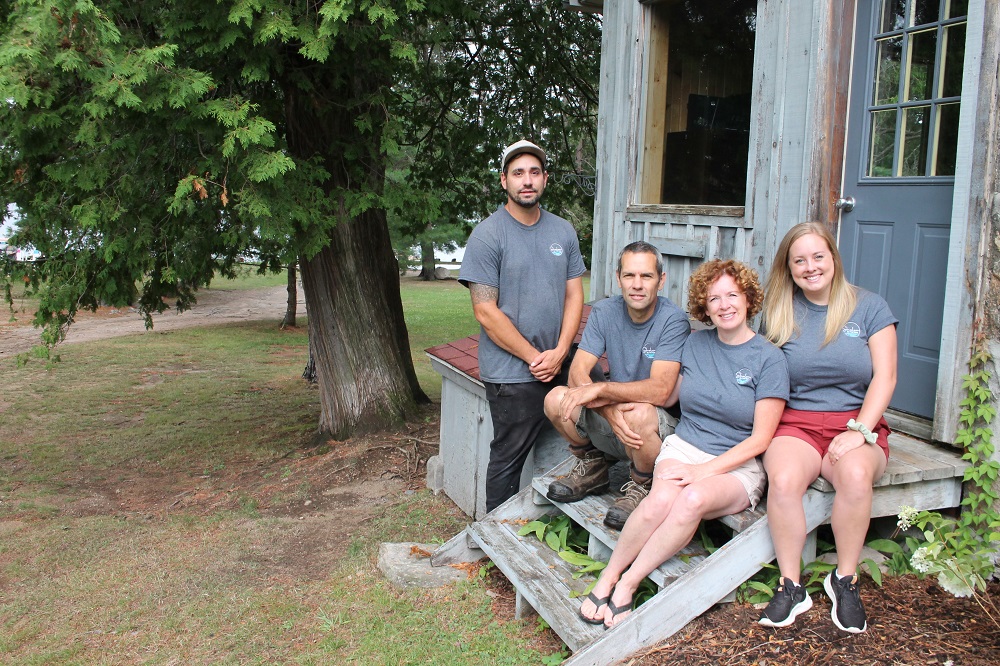 When patriarch Joe Kegel passed away, his son-inlaw Chris Lawson felt a calling to take on the family business.

Despite originally not wanting to own Shalom By The Lake, Chris and wife, Darlene, answered the call.

They’ve been joined by their daughter, Tara Schroeder and her husband, Andrew, in forming “the dream team” as Darlene calls it at the historic resort on the shores of Halls Lake in Algonquin Highlands.

Darlene moved to the property in the spring of 2021 and the others joined her in September 2021.

Now just shy of a year for all of them, Tara recalled how between September of last year and June this year, they renovated cottages, maintained the grounds, and developed a business model more in keeping with 2022.

“With that comes our online booking system, actually having a workable website and also just promoting this place and sharing with our community that we are here,” Tara said.

Because they worked so hard preparing for this summer season, the mother and daughter said there is time to sit on the porch and reflect in between turnovers.

Darlene’s parents, Joe and Suzette Kegel, bought Shalom By The Lake in 1989. They took three younger sons with them while the five remaining siblings had already married and lived elsewhere. She said that when her folks arrived, they could not move into the wooden and stone cottage since animals had taken up abode. They instead moved into one of the resort cabins and for the next 10 years or so, tore down a few cottages, built and renovated others, and constructed a retreat centre.

Darlene married Chris the summer her parents moved to the County but said, “my kids would spend the summers here. We would pack up every summer and come up here and clean and play and help.”

So, with Joe’s passing, she said they all wanted to keep it in the family but she and Chris didn’t know how it would all pan out since they had a farm in Woodville “and we really weren’t set on coming up here at all.”

“But as it happened, about a year ago, my husband had just in his brain thought this was something he wanted to talk to my dad about, to come and take over the business and, so, long story short, that’s why we’re here.”

Then Tara, who had been working in administration at a summer camp, and Andrew, a camp cook, decided to join them.

Darlene said they each bring a skillset. Chris came from a construction background, Tara camp admin, Andrew, a chef. As for her mom, Tara said, “she kind of brings us all together – a lot of skills.”

With 80 per cent returning summer clientele, some for 30 years, the dream team said they don’t have to work hard at getting summer visitors to their self-contained cottages, retreat centre, tuck shop and beach. That said, they spend time socializing with the families.

“We sit at the beach with them and talk to them. They want to talk to us. Some have been here for the last 30 years.” Next generations are taking on family bookings.

However, they do want to increase winter patronage, in which people can ice fish, snowmobile or just watch the snow fall from inside one of five winterized cottages. They said they had more people in winter 2021-22 than ever before, thanks in part to a social media presence.

They also built an ice rink on the lake that was popular with the locals, too.

Darlene said, “that is one of our goals for continuing into the future, is to have this place for our community, not just for the people that pay to come here.”

Since starting out as the Ackerman farm, Darlene said it has always been a community place.

Shalom is a Hebrew word with many meanings, but one of them is peaceful.

Darlene said that is a legacy they want to continue.

“We hear that all the time. A week doesn’t go by where people have come up here and said just walking through this place is just so peaceful. So, it is definitely living up to its name.”

They’re having a family fun day Sunday, Aug. 7 from noon to 4 p.m. with games, food and sweet treats. $6 contribution for the barbecue but children under three eat for free.

A new era for vinyl and vintage shops

New enterprise lighting up the Highlands