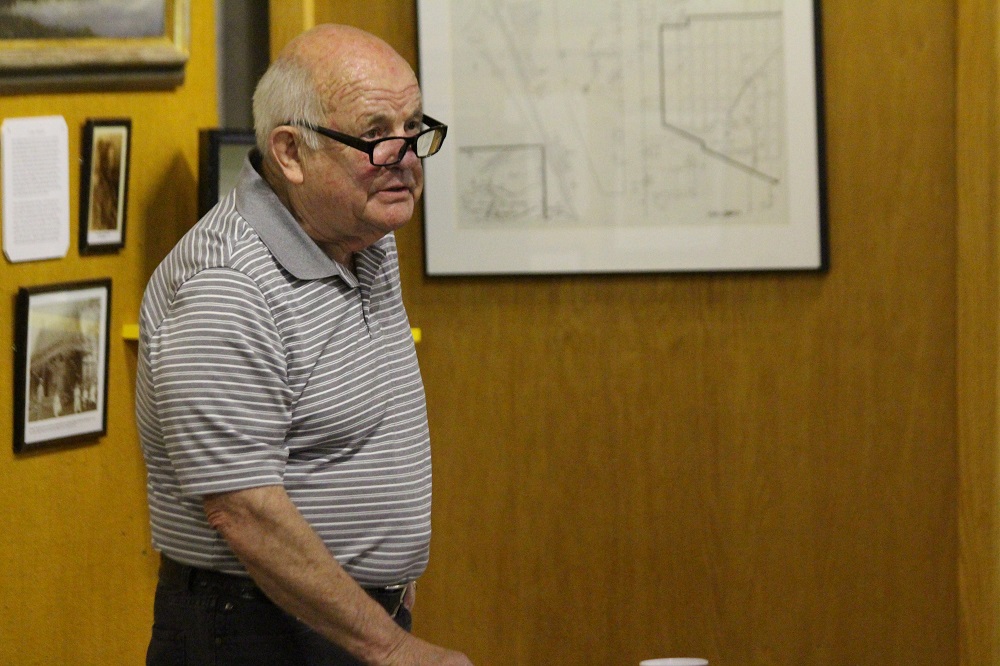 Few things have united communities in Haliburton County as much as hockey.

At a July 21 meeting of the Haliburton County Historical Society, Scott LaRue charted Haliburton County’s progression from a fiercely competitive collection of remote teams to Ontario championshipwinning squads that laid the groundwork for local stars of the modern game such as Cody Hodgson and Matt Duchene to shine.

LaRue is an expert on Haliburton hockey, playing professionally in Europe before returning to the Highlands. He managed the famous 1971 Haliburton Huskies to their Ontario Hockey Association D title. His father Albert John (A.J.) LaRue fundraised for the Haliburton arena they won the cup in, which elevated the local game through access to artificial ice.

“My father realized that none of these players were going to have an opportunity to upgrade their hockey to another level,” LaRue said, standing in front of a crowd at the Haliburton Highlands Museum.

Before that arena was built, hockey in Haliburton looked very different but the shinny was no less competitive.

LaRue explained how the County’s towns took the game seriously during the first half of the 20th century.

The rivalries between communities such as Haliburton, Eagle Lake, Minden, and Wilberforce all burned piping hot. Young men who worked in the lumber yards or in other remote jobs made up the teams.

When playing against farther-flung teams, towns would charter trains to the game, which became destinations of their own.

“And they partied,” LaRue said. “I think there were sandwiches being sold and other stronger beverages too.”

Communities didn’t just get on board trains: they joined the hockey bandwagon.

“The community spirit increased. People got more interested in the opportunities hockey provided.”

In 1965, the arena opened after A.J. spent months lobbying businesses for donations. LaRue said many of the largest employers in the County, such as lumber yards, weren’t big donators.

But whether with 50 cents or a $5 bill, the community backed the project. The arena became a reality.

LaRue himself took advantage of that new ice surface, which was more level due to its sand base.

“All the ice time I got improved me,” LaRue said. He soon left to play professional hockey in Europe.

After he returned to Haliburton, he took over operation of the arena, and soon became coach of the Haliburton Huskies squad his father was instrumental in bringing to the County.

“The team we came up with were little guys but they were really hard-working kids.”

LaRue recounted how the team, captained by Bob Woodcock, beat Exeter 6-5 in front of 1,500 fans jam-packed into the Haliburton Arena. Some stood on tables, others jostled for space in the sound booth.

Ron Stackhouse played in that arena, and so did Hodgson who played in Vancouver, as well as a stint with the Buffalo Sabres and Nashville Predators.

Current forward for the Predators, Matt Duchene, also took to the ice in Haliburton.

LaRue reflected that his father’s hard work, and the whole hockey family formed Haliburton’s hockey community today. “I think that it eventually all paid off,” LaRue said