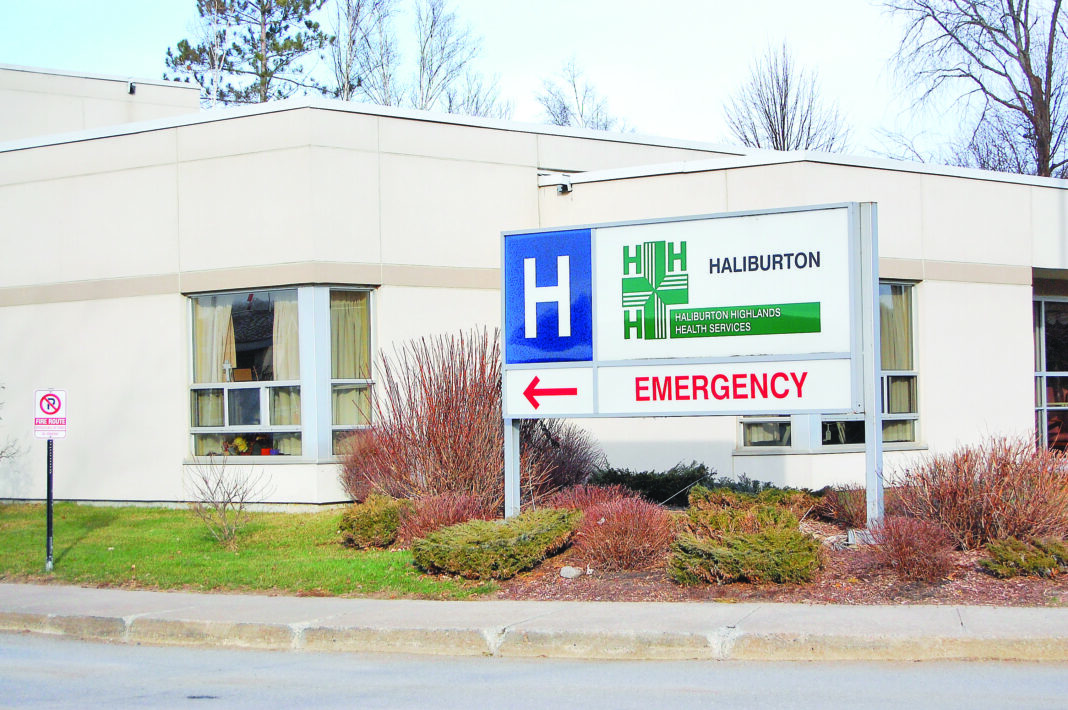 Haliburton Highlands Health Services (HHHS) saw a record number of people pass through its emergency departments during the last fiscal year, with more than 22,000 visits reported between Mar. 31, 2021 and April 1, 2022.

Speaking at the organization’s virtual annual general meeting June 23, president and CEO Carolyn Plummer said they were up around 4,500 visits from the previous year, marking a busy 12 months for staff, who also had to contend with COVID-19 repercussions.

“We are seeing a return to the types of volumes before the pandemic hit. What we are seeing in addition to that is an increasing complexity of patients as well,” Plummer said.

Staffing shortages across HHHS have left the hospital’s two emergency departments in Haliburton and Minden vulnerable. Plummer reported back in November that a reduction in hours and service may be necessary. The hospital has since relied on agency nurses and HealthForce Ontario emergency department locum program physicians to keep both sites operational 24/7. While staffing remains an issue, Plummer has said both departments will remain open throughout the summer.

Plummer added HHHS will be partnering with local municipalities to identify potential collaborations and ways to support recruitment, as well as retain existing staff.

Last year also saw some major changes in the way HHHS documents and reports information with a transition to EPIC, an electronic health records software system, and AlayaCare, a cloud-based scheduling system.

“It’s taken years the implementation of these new systems, and it’s been an absolutely tremendous achievement for our staff. I know it hasn’t been easy, and it’s meant a huge shift in the way our teams document their various workflows… but ultimately it has led to improvements for patients and clients,” Plummer said.

Lisa Tompkins, who will soon be retiring as executive director of the HHHS Foundation, said the organization’s fundraising efforts in 2021/22 had resulted in $413,494 in transfers to the hospitals to fund various new equipment purchases.

The foundation raised a record $243,910 through its festive Believe in the Magic of Giving campaign, while the annual Radiothon, held in partnership with MooseFM, garnered just under $34,000. A new monthly 50/50 lottery has also been successful, with over $88,000 in ticket sales since its launch last summer.

The money was used to purchase new vital sign monitors; mobile workstations on wheels to support the new EPIC software; accessible bathtubs for Highland Wood and Hyland Crest long-term care centres; a bariatric bed, and a new food steamer for the kitchen at the Minden hospital. Some interim funding was also provided to help with the new nurse call bell system at Highland Wood and Hyland Crest.

With the pandemic subsiding during the latter part of the 2021/22 fiscal year, Plummer said HHHS was able to bring back some of its popular community programs, and ramp up support in others that continued throughout COVID-19.

The Geriatric Assessment and Intervention Network (GAIN) clinic has seen a 15 per cent increase in client visits, while the Home First/Home at Last program has more than doubled its clientele. Diabetes education saw an 18 per cent jump in clients and 22 per cent hike in visits) the hospice and palliative care programs a 20 per cent uptick and 80 per cent jump in visits.