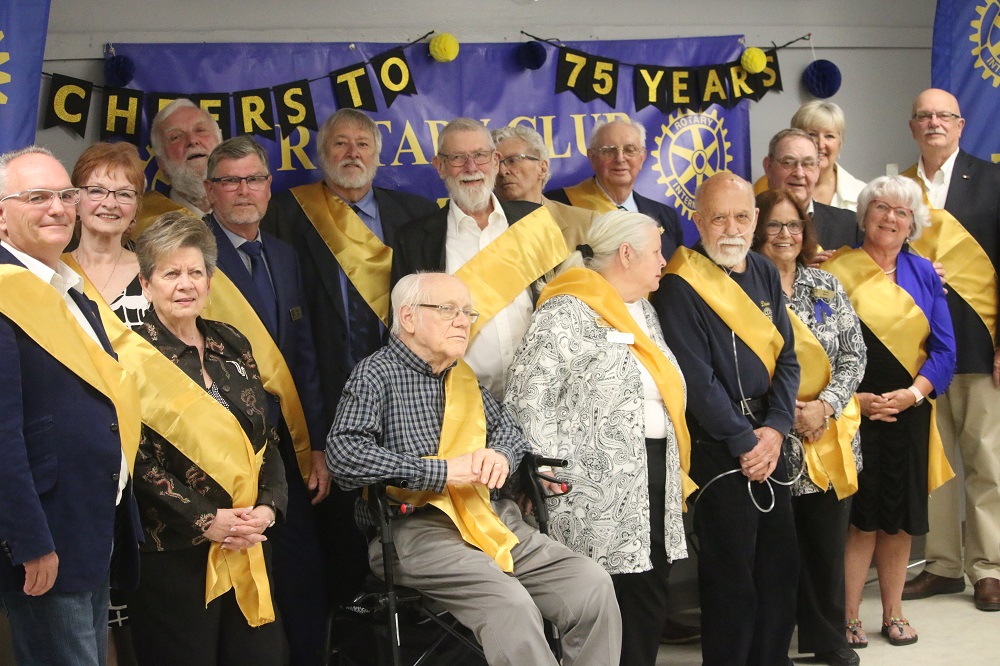 With dozens of pivotal community contributions under its belt over the past three quarters of a century, Minden Rotary is the embodiment of its mantra “service above self”.

The club celebrated its 75th anniversary with a dinner gala fundraiser at the Minden Community Centre June 4, inviting past and present members for a trip down memory lane to remember the connections, friendships and projects the group has fostered and supported since its inauguration.

Legacy members and past presidents such as Dick Schell, Bill Obee and Paul Sisson were on hand, much to the delight of outgoing president Lynda Litwin.

“This was a wonderful event to recognize and acknowledge the contributions our club has made to the community over the past 75 years, and it was great to have so many long-standing members in attendance,” Litwin said. “We had a lot of people saying they were close to tears when they walked in, saying it was the first time they had been anywhere or seen anybody in more than two years.”

A member since 2013, Litwin has helped to steady the ship during the COVID-19 pandemic. She played a key role in Rotary’s efforts to staff the vaccination clinics that took place in the community in 2021-22.

“That was one of our biggest success stories. We got the call from the regional health unit saying they were looking for help, and one of our members, Sally Moore, took it over and led the whole effort,” Litwin said.

“We ended up with over 200 volunteers, which is a testament to what a wonderful community we live in.”

When Jeanne Anthon thinks about the many contributions Minden Rotary has made to the community, there was one project that stood above all others.

“I really feel strongly that Minden Rotary ensured the development of our local hospital and provided financial stability to it for a lot of years,” Anthon said, noting the club’s contributions to the original build were around $150,000. “Then you look at things like Rotary Park, the tennis courts, the village green, even the original arena… They might not have happened without Minden Rotary.”

Anthon has been a proud member of the club for 31 years and was one of the first women permitted to join, alongside Shirley Kuni in 1991.

While she admits it took a little while for her to get up to speed with the inner workings of the club, now she couldn’t imagine life without it.

“I consider Rotary like my other family… It has become a very important part of my life,” Anthon said. “I look forward to our weekly meetings. I cherish the friendships I have made over the years. It’s been a pleasure, truly, to put service above self.”

Rotary around the world

Minden Rotary is hosting a ‘Rotary Around the World Meet and Greet’ via Zoom June 13 at 7 p.m.

The event is being described as a sharing of information on the work that Rotary accomplishes around the world and in Haliburton County.

“Our plan is to help folks living locally to know that there is a host of people around the world who are peacekeepers and who find their way to the areas of need… flooding, earthquakes and war,” said Rotarian Sally Moore. “Our Rotarians at home are these kinds of people and we wish to tell the world that it is a family of people who follow the mantra ‘service above self’.”

Lakeside storytime with the Lions