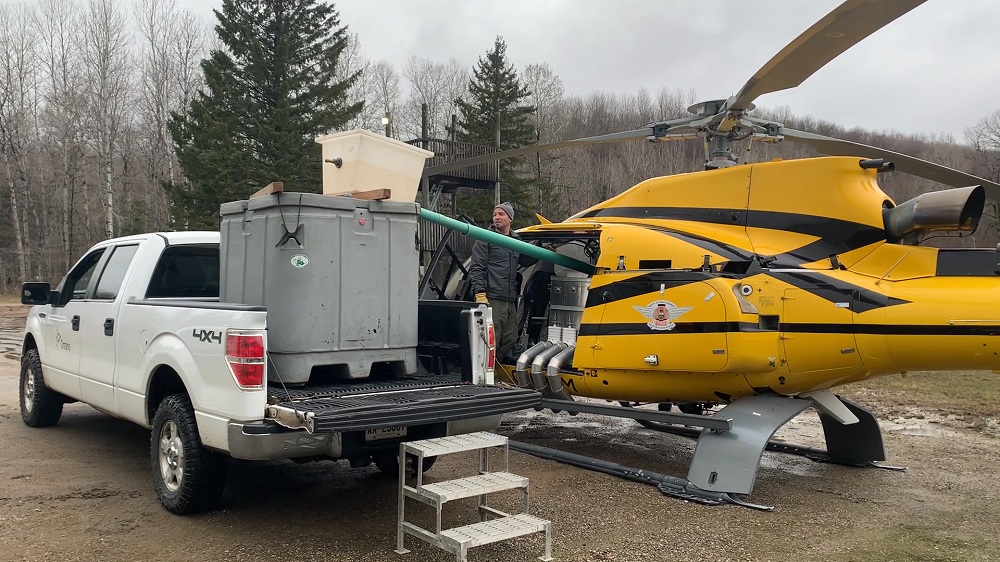 Thirty-five thousand new fish are swimming through Haliburton lakes this spring thanks to the Haliburton Highlands Outdoors Association (HHOA).

The association raised 15,000 Lake Trout and 20,000 Rainbow Trout this year at its Gelert Road hatchery.

For 12 days, HHOA volunteers shipped out tanks of fish to 18 lakes around the County. Some were dropped by helicopter, others by boat.

“Stocking thousands of fish in multiple lakes is a very big job that involves a lot of moving parts and a lot of people power,” HHOA President Dan Smith said in a media release. “Timing is critical. Water temperatures have to be just right. It’s a lot of coordination and hard work but it’s well worth the effort to help maintain good fishing in our lakes.”

Hatchery manager Randy Charter is stepping down after seven years. Charter was the volunteer responsible for coordinating stocking efforts and completing other tasks around the hatchery.

“Randy has been a wonderful member and friend to the HHOA. His contributions have been outstanding. He will truly be missed and we wish him the best going forward,” Smith said.

Charter said the HHOA is a “wonderful organization with so many great people, with various life skills and experiences coming together to achieve a common goal.

I want to thank all our volunteers over the years for coming on board, working hard and helping to build an awesome team,” said Charter.

“We think our efforts are going to have an impact,” said Tim Bahr, HHOA board member.

He said the next step is coordinating with Trent Severn Waterways staff to ensure the river gets adequate flow, to help the Walleye flourish.

“What we need to do is work really hard to make sure that water flow is maintained at the level it’s supposed to,” he said.

He encouraged anglers and fishery supporters to play the association’s 50/50 draw to help raise money for their Walleye preservation efforts.

Kimberly MacDonald won the HHOA’s first 50/50 draw for 2022, totalling $2,270. Half the proceeds from the 50/50 draw fund HHOA’s walleye spawning rehabilitation efforts, stocking local lakes and other activities. Tickets can be purchased at bigcatch5050.ca.