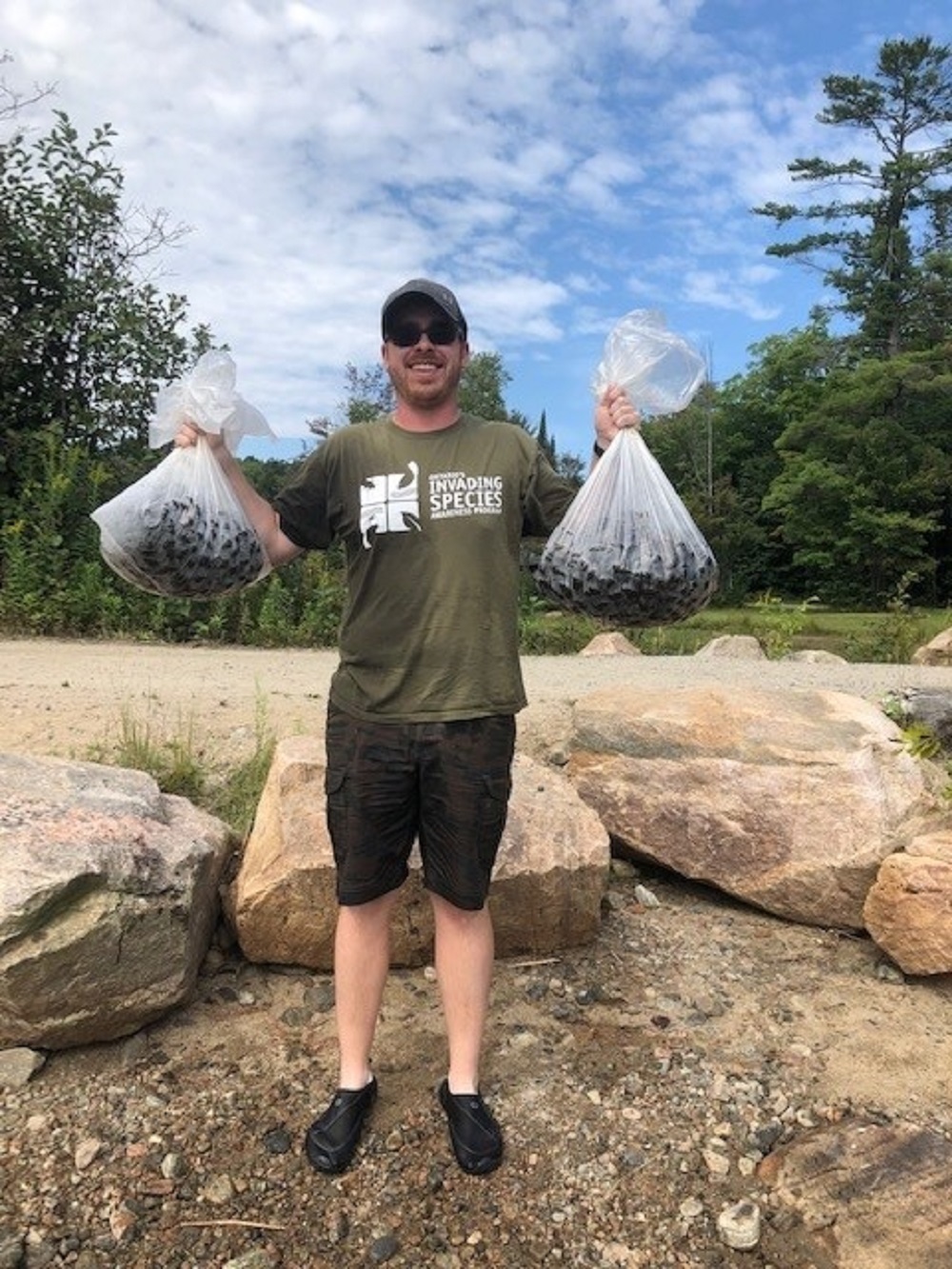 A new program pioneered in Haliburton County in 2021 is starting to turn heads around the world.

After seeing dozens of area lakes infiltrated by invasive snails in recent years, the Coalition of Haliburton Property Owners Association (CHA) teamed up with specialists from the Ontario Federation of Angling and Hunting (OFAH) to design a program to tackle the issue.

The effort saw around 300 volunteers come together to remove approximately 553,000 Chinese mystery snails and Banded mystery snails from more than 20 area waterbodies.

Brook Schryer, an aquatic program specialist with OFAH, discussed the program at the CHA’s 2022 lake stewards meeting, held at the Haliburton Legion May 14.

“Because snails are classified as fish in Ontario, we had to ensure volunteers that wanted to take part were trained and licensed to do so… Because the training is so stringent, we were successful in applying for a master license, which enabled us to host group training sessions and providing people passed, they could operate under that master license,” Schryer previously told The Highlander. “It was quite revolutionary, and hadn’t really been done before.”

Following the success of that inaugural year, Schryer started to hear from individuals all over North America seeking to establish similar programs. Lake experts from Oregon, Minnesota, Alberta and Quebec were among the first to get going. Earlier this year, Schryer presented the program at an international conference in Belgium, meaning the initiative fostered here in the Highlands is starting to take off across the globe.

The program will be running again in Haliburton County this year, with Schryer already hosting one training event in early May.

Speaking to the importance of the program, Schryer said the snails can wreak havoc on a lake’s eco-system. The snails have been known to eat largemouth bass eggs, impacting the bass population in lakes, while they have also been linked to various parasites that can be passed on to fish, waterfowl and humans, causing a myriad of issues including Swimmer’s Itch.

A single mystery snail, Schryer said, can store up to 100 embryos inside its body and can reproduce four or five times during its life. “Easy to see how they’ve become such a significant problem,” he said.

In another presentation, Schryer noted around $3.6 billion is spent annually in Ontario managing around 440 different invasive species.

Ontario’s Invasive Species Act was created in 2015 and regulates the management and prevention of invasive species in Ontario. As of this year, Schryer says there are 22 species listed as prohibited, meaning they are illegal to transport, possess or release into the public.

A further 11 species are listed as restricted, meaning they are illegal to import, and bring into provincial parks or conservation areas.

Matt Robbins, also with OFAH, noted that, as of Jan. 1, the province has implemented new rules regarding the transporting of boats overland and has introduced strict cleaning measures to avoid transporting invasive aquatic species from one waterbody to another.

It is now required that drain plugs be opened or removed before a boat can be taken out of the water and transported elsewhere. As well, Robbins stated that reasonable measures should be taken to ensure all plants, animals and debris be removed from the boat before its transferred. Once cleaned, it’s recommended that owners dry or disinfect their watercraft for at least five days, leaving it exposed to sunlight, and cleaning it with hot water over 50 degrees Celsius, or a pressure washer between 2,500 and 3,000 psi.

In an update regarding baitfish, Robbins said that bait or leeches can no longer be transported outside of the BMZ zone they were purchased in. This means anglers fishing outside of their home BMZ zone must purchase their bait in the zone they’re fishing.