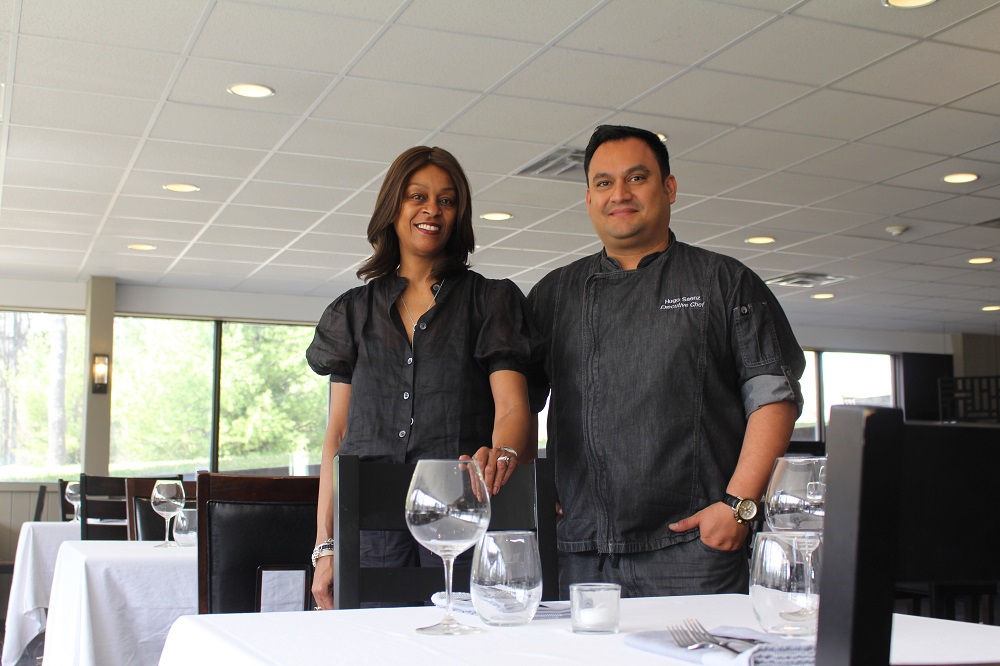 Chef Hugo Saenz has taken the long route to the Haliburton Highlands. After training in Mexico, he travelled across Europe expanding his culinary palette before working at a variety of kitchens across Toronto.

The name refers to NOMI’s 850 acres of trails, forest and resort space. Saenz’s menu takes inspiration from Mediterranean cuisine, Mexico and NOMI’s surroundings, but he said his style of cooking is expansive.

“I don’t like to be put in a category. I don’t want to lose anyone” said Saenz, sitting in the restaurant’s dining room across from NOMI COO Susan Elizabeth (Elise) Blouin. The menu includes classics such as beef short ribs and, Blouin’s favourite, the pan-seared steelhead trout with beet hummus, green lentils and salsa.

Fresh is a must, said Saenz. That’s why he makes weekly trips to producers in Toronto that he’s worked with for years rather than relying on produce shipped north.

Paired with his steak? Fries, with a dash of sumac on top. “You need that acidity,” Saenz said.

“That makes the flavour profile richer.”

Blouin hired Saenz during the height of COVID-19. He said it was an unusual proposition.

“What caught my attention was ‘what kind of wacko would be hiring for a project like this right now?’”

He was hooked after Blouin pitched him NOMI’s vision: a resort community where guests might stay at the lodge and hike or cross-country ski before sampling his menu. Soon, work will start on dozens of houses on the property, many of which have already been purchased.

Along with the main Lands8Fifty restaurant, NOMI will expand dining options to a lakeside clubhouse. There will also be a Nespresso cafe.

“The first Nespresso cafe in the middle of a forest,” said Blouin.

“There’s always a risk,” she said, in investing so much time and capital into a fine-dining operation that’s relatively remote. “But you have to look beyond that.”

Blouin said the restaurant, part of NOMI’s first stage of redevelopment, has had a warm reception from guests and diners who’ve driven up to an hour and a half for a meal. One guest had Saenz’s French onion soup, which he takes five days to make, three times during her stay.

“I told her, ‘you know we have other things on this menu’,” Saenz said.

He said his work at NOMI will likely be the highlight of his career. He’s brought on long-time colleague Andrew Harasti to serve as chef de cuisine and is intent on shaping NOMI kitchen culture into a tightknit community of professionals.

Saenz added that the diners’ reactions have been the highlight of his time so far.

“They’re not expecting this level of cuisine. It just makes their day,” he said.

What you need to know about Haliburton County reopening