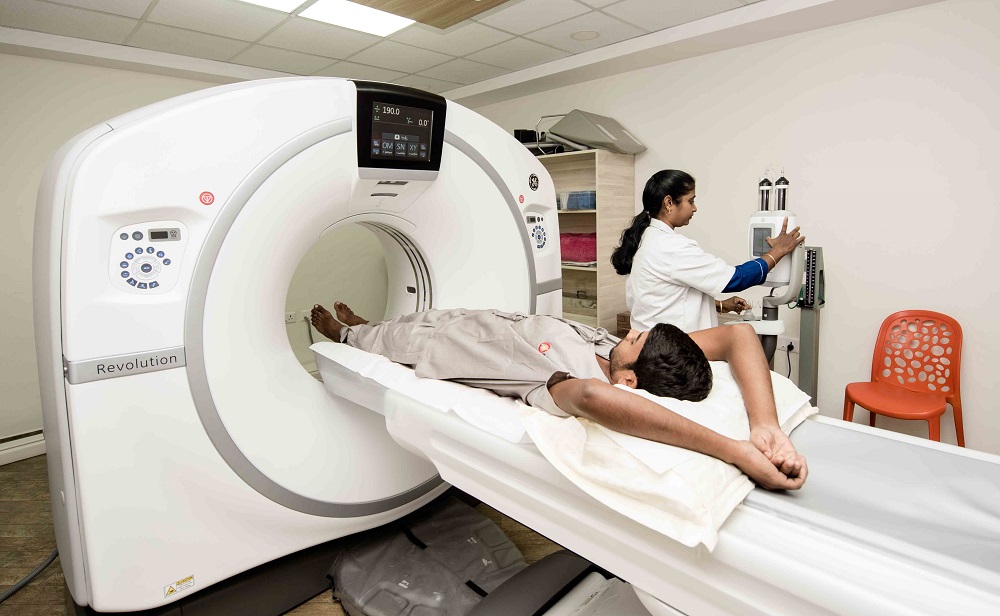 County of Haliburton CAO Mike Rutter raised the issue of the need for a CT scanner for Haliburton County during an April 13 council meeting.

His comments came after director of emergency services, Tim Waite, said a lot of ambulance time is used transporting patients to Lindsay and Peterborough for diagnostic imaging.

Presenting his 2021 annual report, Waite said, “our number one call is an interfacility transfer, and a lot of that’s associated with CT transfers, transfers for CT scans for diagnostic imaging to Lindsay and Peterborough.”

His report showed that 23.18 per cent of calls were for interfacility transfers.

Asked by The Highlander what this is costing the service, Waite said the majority of transfers to take a patient to Lindsay or Peterborough has the crew out of the County on average five hours. Factoring in wages, overhead, fuel costs and vehicle wear and tear, the average transfer for CT costs $720. He said they are completing 300 transfers per year for patients requiring a CT scan which equates to $216,000 a year.

“Plus it takes a crew out of the County for that extended period of time where they could be available locally for 911 calls. Having one or more ambulances out of the County on CT transfers also directly reflects on response times.”

“We spend many, many, many hours outside the County travelling up and down County roads with the ambulances so they’re not available for emergency calls inside the County and so the best-case scenario is a CT scanner here,” Rutter said.

“From a patient care standpoint, that would be wonderful, where patients can actually have that diagnostic tool nearby so they don’t have to suffer that trip as well.

“So, I know County Council is establishing a much stronger relationship with HHHS and I think that’s one area where we hope that there’s conversation because that would be a real game changer for patients in Haliburton County, doctors in Haliburton County and certainly the paramedics as well.”

HHHS president and CEO Carolyn Plummer said April 14, “while we know many small hospitals do not have their own CT scanners and instead rely on larger partners, we do believe it would be of great benefit to the community. We are exploring this – collecting stats, etc. – to see if we have enough to build a business case for approval from the Ministry of Health; however, it is early days and I don’t have anything further to share right now.”

Coun. Pat Kennedy also picked up on the fact that ambulances are experiencing off-load delays and are also responding to 911 calls in places such as Lindsay and Peterborough because they happen to be available when in those jurisdictions.

Waite said, “we do a lot of calls in the other jurisdictions. A lot of the time because we’ve done transfers into Peterborough or Lindsay, and we end up being the closest car to a 911 call. What happens is, the local crews in Lindsay, say, are in an off-load delay and we’re leaving, that’s why we get sent on a call, because we’re the closest vehicle trying to get out of the city.”

Waite said the Ontario Association of Paramedics Chiefs is working with the province, looking at trying to alleviate some of the off-load delays. He said it was particularly bad around Christmas with COVID spiking and the new EPIC patient record system being launched.

Until a solution can be found, Waite added, “we just have to live with it and try and just buckle down and get through it and see what new plans and alternatives destination plans come up for patients.”