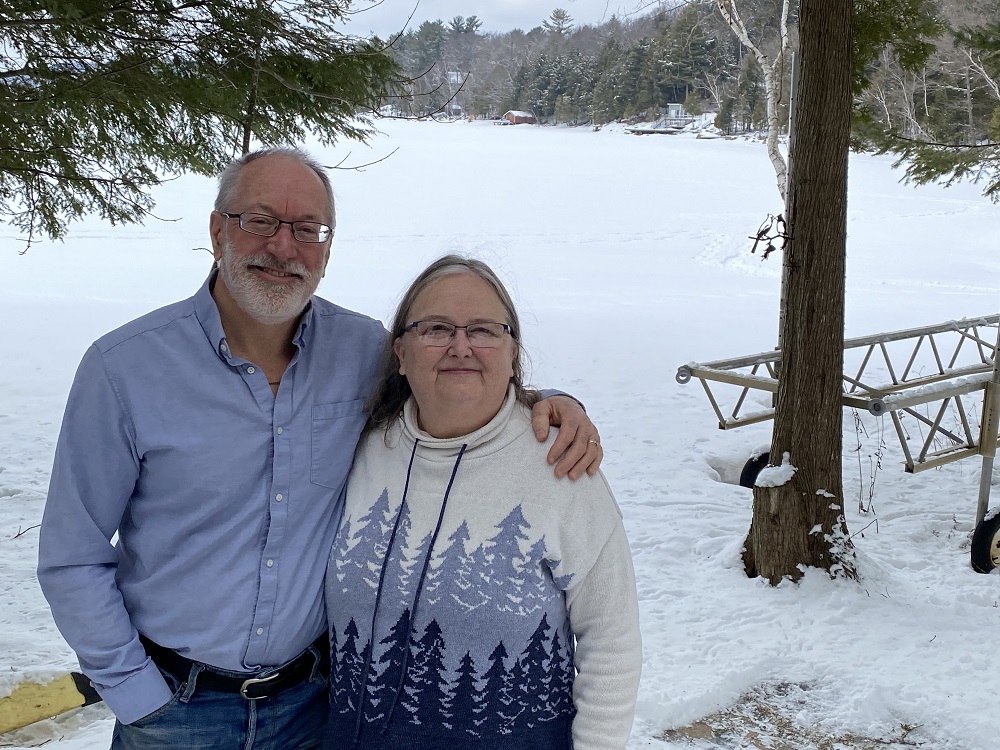 That’s just one interesting tidbit Charles and Laurie Wheeler have uncovered while researching their soon-to-be-published book The History of the Drag Lake Community.

What initially began as a pet project borne out of a desire to learn more about the history of their land on Depot Bay manifested into a year-long undertaking highlighting the history of Drag Lake, Spruce Lake and Outlet Bay.

The Wheelers have spent thousands of hours poring over historical documents, conducting interviews, compiling photos, maps and paintings and writing. The end product is a near 500-page book that will be published later this year.

“We’ve been coming to our cottage on Depot Bay for 35 years, but realized there’s a whole bunch of stuff about the history of the lake that we didn’t know about. That’s what sparked this whole thing, then as we did more digging, we decided to expand the book to cover the whole lake,” Charles said.

Much of the content was sourced from the Haliburton Highlands Museum, Archives Canada, the Province of Ontario Archives and the Toronto, Peterborough and Trent University archives. Charles estimates he completed between 70 and 75 first-person interviews to help piece things together.

Loathe to give too much away before the release, Charles delved into the historical name of the lake when asked to comment on the most interesting piece of information he learned.

He found evidence that suggested Drag Lake was, more than 100 years ago, two lakes split by a sand divider. This theory was confirmed by Wayne Roberts, grandson of Tom Roberts, for whom the locally-famous Uncle Tom’s Cabin was named.

“Before the lake was dammed, the water levels were much lower than today. On the west side of the lake, there’s an area called Sand Point. Once, people could walk across a sandspit that separated the west and east sides of the lake. Wayne told us he could do that as recently as the late 1930s,” Charles said. “I believe that sandspit is still visible today, only it’s buried by about 10 feet of water.”

The water level of Drag Lake has been a bone of contention with local cottagers for generations. As far back as the early 1900s, Charles said several property owners had trouble accessing their land as there were no roads developed yet, and when water levels were low, parts of the lake were unnavigable.

Because Drag Lake was considered a reservoir lake to supplement the Trent Severn Waterway, landowners and the townships were limited in what they could do to address the issue. Charles found letters between area residents and at least one federal representative that he described as less than savoury.

“This guy basically gave Drag Lake the middle finger for 30 years. He went out of his way to frustrate Dysart council and cottagers,” Charles said.

Laurie spent a considerable amount of time researching the history of lumbering on land surrounding Drag Lake. While many published books in circulation today indicate Mossom Boyd was the main player in the logging industry during the late 1800s, Laurie said she found evidence that suggested he had only worked in the area for three years, between 1869 and 1871.

Another company, going by the name Boyd Smith, operated between 1871 and 1884. The company was made up of four partners, including Boyd, who she said left the business in 1872, his son Gardner, Alexander Smith and James Irwin.

“The big picture here is there was a first, second and third pass of lumbering. The first pass was the 1870s, where Boyd Smith was most prevalent. Then the second pass was 1900 to 1926, when William Laking was the main name. The third pass, which was mostly hardwoods, was in the 1930s and 1940s,” Charles said. “By the end of the 40s, the lumber industry on Drag Lake and in Haliburton was basically dead.”

As the pair put the finishing touches on their baby, they are encouraging other community members to pick up where they left off.

“One of the biggest challenges we had was finding out little pieces of information and wanting to go down that rabbit hole and find out where it leads, but it turns out there’s pretty much an unlimited number of rabbit holes you could go down,” Charles said. “It’s just impossible to cover every little detail and chase every lead. At the front of the book there’s going to be a document of things that we just couldn’t get to. Hopefully somebody else can pick it up, do some more research and find a few rabbit holes of their own.”

The final version of the book will feature paintings from renowned local artists Ethel Curry and Neil Broadfoot.

While it has been a monumental effort from the Wheelers in putting The History of the Drag Lake Community together, the couple say they didn’t do it all alone.

“We’re incredibly thankful to all the people who have helped us. Steve Hill at the Haliburton Highlands Museum has been instrumental, and there’s a number of others without whom we wouldn’t have been able to do this,” Wheeler said. “We want to give a bit of a shout out to these people. It’s probably 100 people in total. We feel this is a book produced by the community, for the community. We’re not looking to profit off of this, we’ll be selling it at cost to anybody that wants one.”

The Wheelers say they will be releasing details over how to order a copy in the near future.