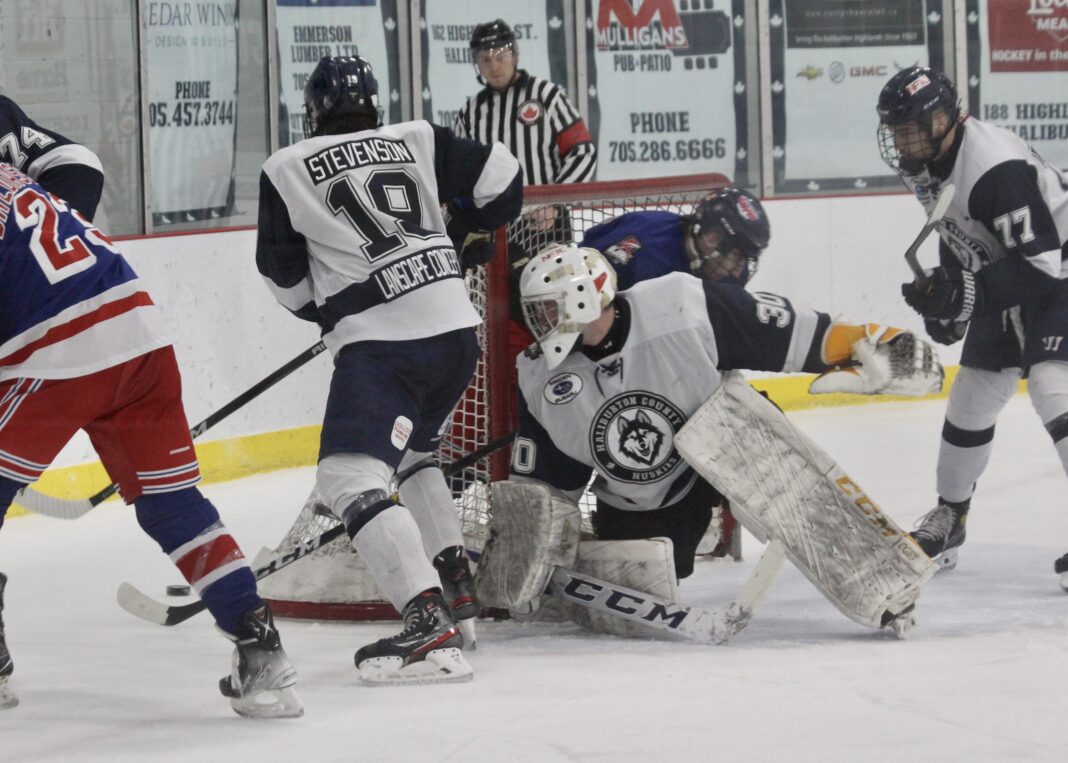 The 3-2 win brought the crowd at the S.G. Nesbitt Memorial Arena to their feet.

From puck drop, the Huskies pressed against the disciplined GTA squad. First-period play was back-and-forth, with neither team claiming advantage of fast, free-flowing hockey. In the second, the Huskies bounded into action.

A short cross from Patrick Saini in front of the Rangers’ net was converted by Lucas Stevenson, who flicked the puck into the bottom left corner. Shortly after, Stevenson slotted another with eight minutes to go in the third period.

With the seconds trickling down, the Rangers pulled their goalie, turning the game on its head.

The red and blue battered the Huskies with an extra attacker, crowding the Dogs’ net, slicing a shot past Christian Cicigoi to make it 2-1, and then 2-2 in quick succession.

Coach Ryan Ramsay said he’s never seen a team score two goals with a goalie pulled. “It’s something that doesn’t happen too often in a game. Hats off to them, they hemmed us in a little bit,” Ramsay said.

As the third period drew to a close, the Huskies’ crowd thundered into life, urging the boys up the rink.

A taut overtime followed, with shots from Saini, Sooklal, Tarr and others coming tantalizingly close to glory. It was Simon Rose who broke the ice deep in the second period of overtime, assisted by Patrick Saini.

The boys in blue flooded the ice to celebrate.

“The boys are playing well, they’ve responded well. Obviously, there’s some confidence coming back into their game,” said Ramsay.

The Huskies trounced St. Michael’s in a 4-1 away win March 4.

Nicholas Athanasaskos opened the scoring in the second minute, assisted by Cameron Kosurko. That prompted a flurry of goals in the period, with Rose capitalizing on a powerplay to bulge the netting, assisted by Stevenson and Saini.

A Payton Schaly goal followed shortly after. St. Michael’s only goal came during a powerplay during the closing seconds of the period.

The Huskies turned on the cruise control, weathering St. Michael’s attacks until the 18th minute of the last period when Christian Stevens snuck home a shot on an empty net.

Ramsay said the return of four-day practice weeks helps prepare the team for these late-season battles as playoffs loom.

“You can slow things down and really teach a lot. Since then, we’ve recorded two big wins,” he said. The Dogs return to play March 11 at home against Trenton before facing fierce rivals Lindsay March 12 at 4:30 p.m. 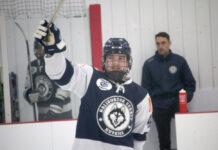