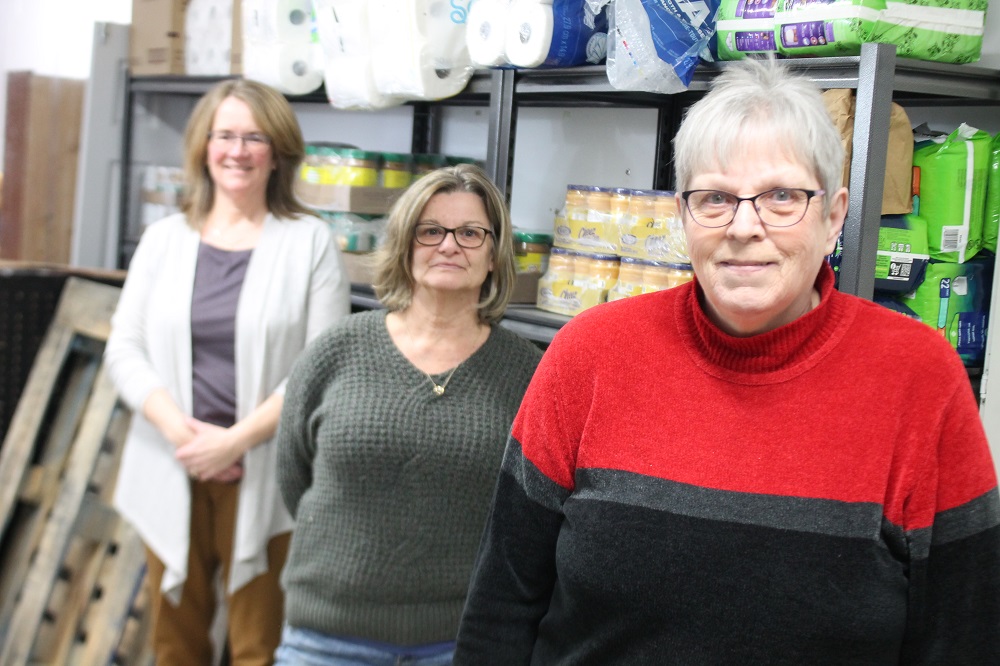 It’s a Monday morning at the Minden Community Food Centre and five-year-old Jack is the boss for the day, his grandmother Joanne Barnes jokes.

She’s watching the toddler while his mom and newborn baby sister are at an out-oftown appointment.

Barnes, who officially retires as manager of the food centre after 18 years March 30, is looking forward to spending a lot more time with Jack and her five other grandchildren, not to mention getting to her mountain of brand new books she’ll have the energy to finally read. She said Jack is already delighted at the prospect of having sleepovers any time as well as a summer at the pool.

“I know in my brain it’s the right time because the job is exhausting me,” Barnes said. “After a hard day here, I go home and I fall asleep at 5 p.m. until 7.30 p.m.” However, she added “My heart will never let go because I’ve helped people since I was a kid. So, it’s mixed feelings.”

She gave her notice in October, wanting to fulfill the centre’s Christmas hamper obligations first, and ensuring replacement staff. The new manager is Jean Munroe and assistant manager Victoria Lawson. Barnes said they’re keen “and I think will form a good leadership team.”

She added her daughters often tell her she’s lived her life backwards. She stayed home to raise her children and then cared for three senior grandparents. It wasn’t until after they died that she returned to church and accepted a call for help at the food bank. She quickly became the manager.

She recalled there were not a lot of systems in place so she began creating them and putting them on paper.

“When I first started, people came in and we handed them a couple of bags of food and that was it.”

Much has changed and grown since.

For example, Barnes said they have found many other ways people need help. Over the past five years, they have accepted donated wheelchairs, walkers and bath chairs, which are loaned to community members who wouldn’t be able to afford to rent, let alone buy them. They’ve found and repaired hearing aids, eyeglasses and teeth. “Any extra major expense they had no way of handling. I would advocate on their behalf with other agencies and we would all come together and pool our resources to come up with funds to help people with these things.”

During the pandemic, they worked with the County’s food banks as a distribution centre, utilizing donations from places such as CanoeFM. She can’t say enough about the community, and the food centres’ workers and volunteers over the years.

She was also instrumental in setting up Fuel for Warmth after visiting a mother who said her children had to wear their snowsuits inside because the family could not afford to both heat the house and feed itself. She heard of seniors wrapping up under several blankets with a pet to keep them warm.

Barnes was asked to describe a good day and a challenging day.

“When somebody out of the blue that you assisted years ago comes back in and says, ‘you really helped me when I was at my lowest. And I’ve just come in to tell you and to thank you for what you did’.”

She does not get into details of bad days, simply saying, “Some days are horrific and you just want to go and cry. And that’s part of why it’s time for me because I don’t get over things as quickly and it weighs heavy on my heart.”

Barnes said the work has been more like a calling. Growing up she recalls her family was not well off but if there was a family with young children in need, her dad was there either with a few dollars or some food and never expected it to be repaid.

“So, I learned that very early on. I was always taught to help, especially the underdog, the kid that’s picked on … in adult life, I’ve always felt great when I can help somebody.