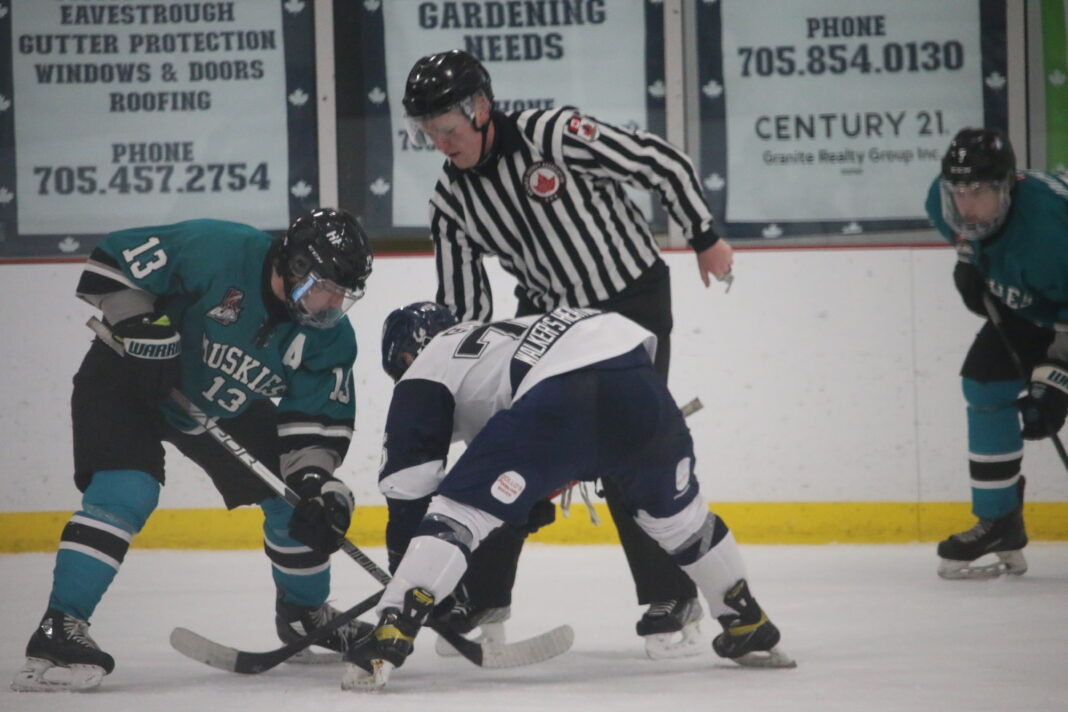 A pair of goals from Patrick Saini and tallies from Payton Schaly, Kolby Poulin and Cameron Kosurko were enough to secure a much-needed win for the Dogs, lifting them back into 2nd place in the OJHL’s East Division.

There was a jovial atmosphere in the stands pre-game, with the hometown crowd excited to catch some afternoon action.

That didn’t quite resonate on the ice, however, with the two teams at each other’s throat right from the first whistle.

Muskies defenceman Gunnar Van Damme got things started 40 seconds in, taking a minor penalty for tripping. Saini capitalized on the opportunity, notching a powerplay marker at the 56 second mark after being found wide open by line mate Oliver Tarr. Saini repeated the trick a minute later, adding his second at 1:56 to give the Huskies a 2-0 lead.

Schaly bagged a third at 7:55, assisted by Lucas Stevenson and Christian Stevens. As good as the Huskies were in the opening period, some sloppy play in the second gave the away side a path back into the game. Muskies top-scorer Boyd Stahlbaum ripped one past a helpless Christian Cicigoi at 6:19, with defenceman Duncan Scullion notching a second at 11:52.

Nate Burelle completed the Muskies’ comeback midway through the third period, scoring on a breakaway just seconds after coming out of the penalty box.

With the tide turning, the Huskies dug in. Head coach Ryan Ramsay sent out a forward line of Saini, Poulin and Schaly in an effort to wrestle back control of the game. The move worked, with the trio combining for the go-ahead goal, scored at 14:31 by Poulin.

It was his first goal of the season. “It was a fantastic feeling, honestly it was about time I got the first one,” Poulin said. “Coach wanted us to make sure we were playing high, and working hard and we managed to force a turnover, Schaly walked out with the puck, fired a perfect pass over to me. I had the easy job of putting it in.”

Kosurko made sure of the win with an empty-netter 15 seconds from time. After a tough week, which had seen the Huskies lose four close one-goal games, including three in overtime, Ramsay was pleased to see his team get back to winning ways.

“We got the start we wanted tonight, let off a bit in the second period and took some bad penalties. But the response from the team in the third was great, they didn’t get down about themselves, they worked and turned it back around,” Ramsay said. “These guys are pretty relentless… You can conquer the world with confidence, and it was nice to see some of the guys holding their sticks a little tight and playing with some swagger.”

The Huskies dropped three games to their closest divisional rivals last week, losing twice to the Wellington Dukes and once to the table-topping Trenton Golden Hawks.

A road game against Wellington Feb. 16 ended with a 2-1 defeat for the Huskies, who went 0-5 on the powerplay and outshot their opponents 34-25, but couldn’t make their dominance count. Stevens scored the team’s only goal in the final minute of the second period.

Another road tussle, this time against the Golden Hawks Feb. 18, saw the Huskies fall to a 3-2 overtime defeat. The Dogs led twice, first through Schaly and then through Bryce Richardson, but couldn’t hold on as the Golden Hawks tied the game in the final minute of the third period, and secured the points two minutes into the extra frame.

There was further heartache Feb. 19 as the Huskies again succumbed to a 3-2 overtime loss, this time at S.G. Nesbitt Memorial Arena. After the Dukes roared out to an early 2-0 lead, goals from Richardson and Oliver Tarr – scoring with one second left on the clock in the third period – gave the Dogs a chance to pull out the two points, but it wasn’t to be.

The Dukes would win it 90 seconds into the overtime period. The team has a double homestand this weekend, welcoming the Toronto Patriots on Friday (7:30 p.m. puck drop) and the Golden Hawks on Saturday (4:30 p.m. puck drop). 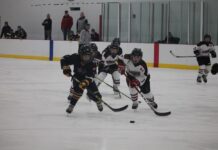 Solarino excited to get back on the ice