Home General News Programming back on at Minden recreation centre 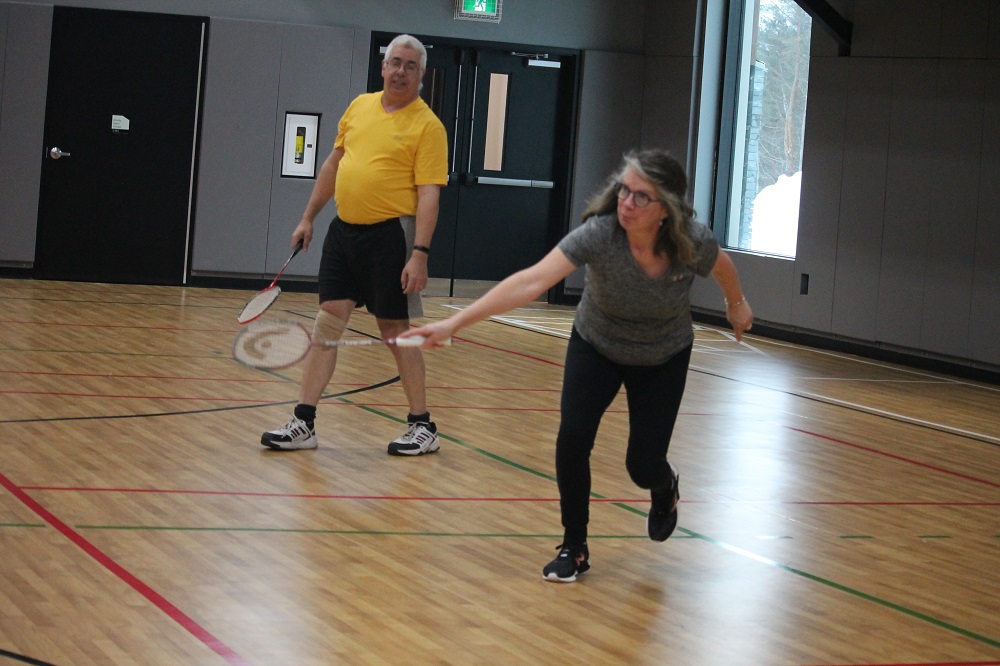 It’s a Thursday morning at the Minden rec centre and brothers Scott and Daryl Moore are on one of four badminton courts while people walk on the elevated track above them.

Elsewhere in the facility, a group of guys are on the ice for shinny.

“So, this is an activity I can get out and play, get some exercise. I find the game invigorating.” He hadn’t played for years, since he was in high school, but is loving the return to the courts.

Scott added, “we’re out here trying to get exercise in. I’ve had some health issues. So, for me, it’s kind of a purpose in my life.”

His wife plays and his daughter comes out occasionally “so from our perspective it’s great.”

Minden Hills community development coordinator Elisha Weiss is checking pre-registered people in. She asks to see their vaccination passport via QR code on their phone and takes their payment.

She said the facility reopened Jan. 31 after provincial restrictions eased.

They are open to badminton, pickleball, basketball, table tennis, the walking track and shinny. Most of the programming is weekdays, although table tennis is Monday nights from 5.30-7.30 p.m.

“Once we get more staff positions hired, we’ll be able to offer more evenings and weekend programming which will be great for all of the working folk,” she said.

Weiss added everything is a little bit slow at the moment.

“Even pickleball, before the shutdown it was getting very busy. I don’t know if it’s just the time of year. Definitely, basketball, we’ve had only a few participants out for that. Really, it would be just nice to see all the programs nice and full. Like, even the shinny today, we only have six or seven.”

She said people also don’t like travelling in winter weather, which she can’t blame them for.

Weiss said, “The doors are open. So, people just have to bring their vaccine QR codes, and ID. Right now, we’re still offering just day passes but hopefully by September we’ll be able to offer memberships.”

The fitness centre is still empty but the township is hoping that by the end of March it will be available, “So that will be really exciting. I know a lot of people are really looking forward to that,” Weiss said.