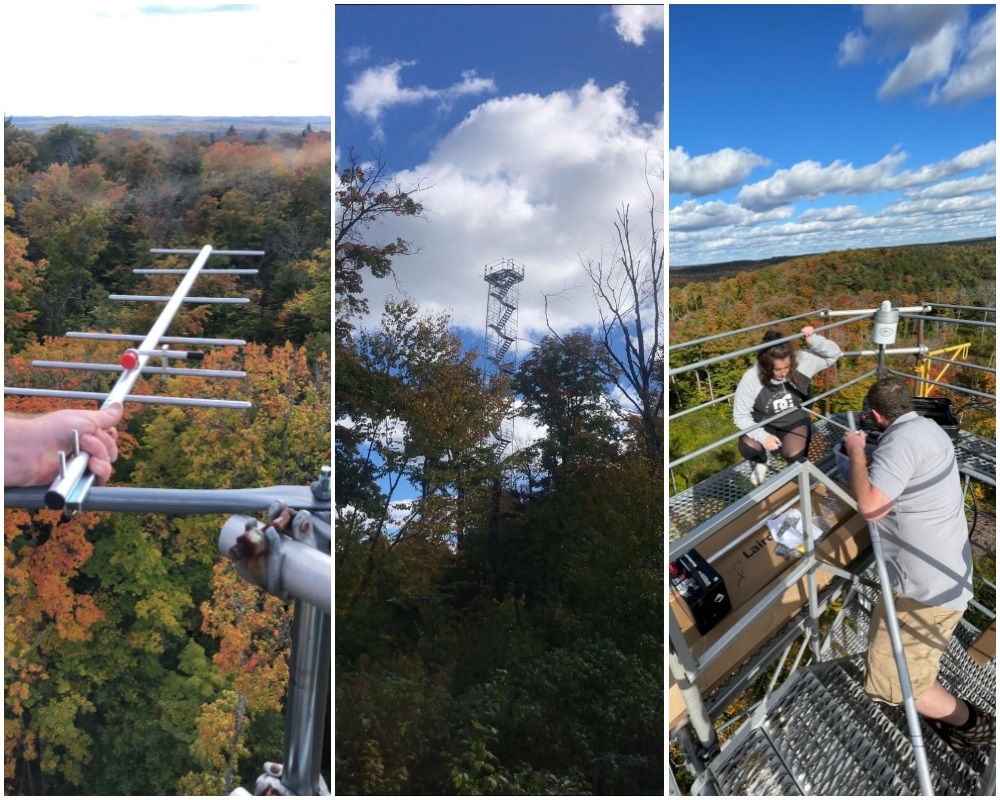 The Land Between is using antennas, blacklight and microchips to monitor a fragile part of Haliburton’s ecosystem.

In September, the conservation organization installed the first of three Motus towers.

“Each tower can track birds leaving and arriving and moving within 20 kilometers of the tower,” said Land Between founder and CEO Leora Berman.

Minute chips, fixed onto the creatures like a miniature backpack, ping the tower and provide organizations such as Berman’s valuable insights into population trends.

“Knowing which habitat birds are using and what area birds rely on helps us conserve those areas,” she said.

One more tower will be installed in 2022, casting a wider net over the Highlands. It’s an area with sparse coverage compared to the rest of the bioregion that spans southern Ontario from Georgian Bay to the Ottawa Valley.

Each tower is nearly $10,000, and they’ll be installed at the Haliburton Forest, Kawartha Highlands Provincial Park and near the Tory Hill area. Berman expects to start collecting data this spring.

“The data that they bring in is worth so many legs in the field,” she said.

Berman said the towers will be especially helpful in tracking certain at-risk birds such as Nightjars. Two sub-species, the Common Nighthawk and Eastern Whip-poor-will are at-risk in Ontario.

Developing a clear idea of the threat to these species involves investigating their food source: mosquitos, black flies and other small insects.

Berman and volunteers have begun insect biomass sampling across Haliburton. That involves coordinating with property owners to sample for insects in different locations.

Armed with a bucket of sugar water, a little soap and a blacklight, the Land Between ventures out during insect season in the spring and fall. They put the filter in the middle of a habitat, for example, a lawn or a forest, to find out “who’s there” in different locations around Haliburton.

While data isn’t sufficient for final analysis yet, it’s showing trends that are worrying.

Mosquito spraying and the removal of natural vegetation are often to blame. A decline in insects or native vegetation means Nightjars and many songbirds go hungry. “Because we’re removing the base of the whole food web we’re seeing a massive decline,” she said.

The decline of bird species such as the Common Nighthawk or Bank Swallow and their food sources of insects such as mosquitos and blackflies, won’t just mean a change to common sights and sounds of the Highlands.

“There is a cascading effect up the food chain,” Berman said. “When there are lots of insects, birds are happy, the fish are happy and nature is happy.”

It could mean decreased pest control, with fewer birds around to eat invasive species such as Gypsy Moths or spruce budworms that can defoliate forests. It also poses a risk to the regeneration of vegetation and natural areas since birds carry and disperse seeds. The decline in seed dispersal then affects the availability of deer feed.

Landowners have a big role to play in crafting bug and bird-friendly environments. Apart from staying away from property-wide mosquito sprays, Berman encourages people to consider researching native vegetation.

That doesn’t necessarily mean mosquitos or blackflies will get worse. Naturalized environments might attract mosquito-loving Nightjars who can eat up to 10,000 bugs a night.

Switching away from LED lights can help too, the blue shade of light attracts bugs to a cottage since it mimics the evening sky. She suggests amber lights and a lower wattage is a better choice. Smoke can act as a repellant too, one that won’t cause long-term effects on a bug’s habitat.

Berman said the Land Between will be focused on that kind of education over the next year, also developing information packages for local governments.

“The municipalities and landowners don’t have enough data or information to make decisions that have a wider and longer view and so we can help fill these gaps” Berman said. “You cannot take pieces away from the food web and not have a cascading effect.”