Birders around Minden faced stormy weather and mild temperatures during a record-setting Christmas bird count. More field observers than ever, 32, scanned the skies, trees and waterways for winged creatures on Dec. 18 in a search area north of Minden. Along with those watching backyard bird feeders, 4,238 different birds were counted. The 20-year average sits at 4,282. Organizer Ed Poropat reported 51 species were recorded, up from the average of 45. Snow, which began to fall mid-morning, made it difficult to find birds due to decreased visibility and poor driving conditions.

That meant many birds passed on backyard feeders in favour of seed crops in the shelter of the forest. “Once again in 2021, most feeder watchers lamented the lack of birds on count day,” Poropat said.

He added bumper seed crops from spruces, tamaracks, hemlocks and yellow birches were a big draw for hungry finches. Some field observers noted “this was the best winter finch year they could remember.”

Birders spotted 867 Common Redpolls, 354 American Goldfinches, and smaller numbers of Pine Siskins and Purple Finches. Open water meant it was challenging for participants to spot spread out birds on lakes within the search area.

Five Red-breasted Mergansers were spotted on Canning Lake, and six Buffleheads near Minden. Poropat said birders documented a record number of 16 Ring-billed Gills, along with 33 Herring Gulls. Some birds commonly hunted, such as Wild Turkey and Ruffed Grouse, likely found shelter throughout the storm, making them harder to spot.

Observers spotted 107 and 11 respectively. Other birds showed up in decreased numbers, for example, 632 Black-capped Chickadees marked a decline from previous years.

Poropat said Ontario-wide monitoring could help determine if the population is declining. Rare finds “As always, one of the interesting aspects of Christmas counts is the discovery and/ or documentation of uncommon or rare species,” Poropat said.

An Eastern Screech Owl might be this year’s celebrity. It was the 109th new species discovered in the 55 years of the count. It is a “rare, prized find anywhere on the Canadian Shield,” Poropat said. “Despite its name, Eastern Screech Owls do not normally screech and instead make a distinctive whinny-like whistle or quiet trill.”

This year, observers also spotted a single male Black-backed Woodpecker near Kinmount, and a Canada Jay was found near Dena Lake.

A pair of Red-bellied Woodpeckers visited feeding stations near Minden Lake and two rare Cedar Waxwings were found. Two White-throated Sparrows and a single female Northern Cardinal made an appearance too.

Poropat thanked volunteers for participating in the count. “Our collective efforts help contribute to knowledge of avian populations and conservation across the continent.” 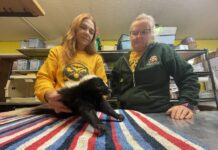 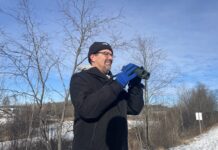 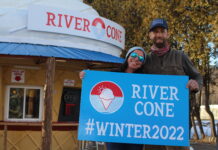 A different kind of ice at River Cone