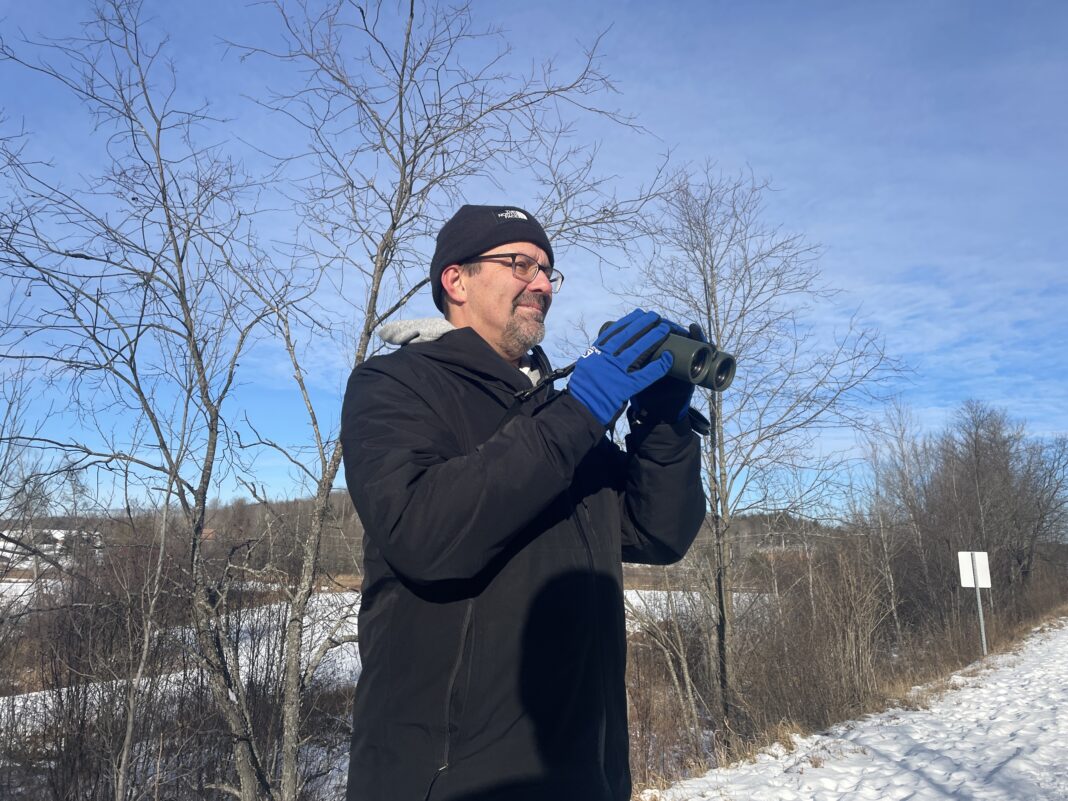 Ed Poropat looks up at the frosty evergreens lining the Haliburton County Rail Trail. With binoculars in one hand, he makes a “pish pish pish” sound that carries through the trees.

With any luck, the birds will answer.

The results aren’t tallied yet; but in some respects the year was already a success. “We had more field counters than we’ve ever had,” Poropat said. This year, there were 32 field participants, along with many others who recorded winged visitors to their bird feeders in the area.

He said there were quite a few new birders this year, paired up with one of the many experienced birders who have made the Christmas bird count a yearly tradition. “We try to build confidence and familiarity with the protocols,” he said.

The Christmas bird count is Canadawide, with Birds Canada tallying up the total results from each 24-kilometre-wide monitoring zone. “Over time you get a picture of what’s going on, because of counts like this,” Poropat said.

For instance, he’s seen an increase in the count of birds of prey in recent years, however overall counts dipped last year to 3,724, down from the 20-year average of 4,280. Some bird populations, he said, are more flighty: depending on the quality of food, such as pine cones, the populations of smaller birds can fluctuate year to year.

Where it gets tricky, said Poropat, is determining how to count birds only once.

Depending on a birder’s location, on which side of the Gull River, for instance, they might accidentally count a bird that is in another counter’s section.

“There’s a lot of phone calls and emails,” he said, as he sorts through the results of the study. It’s a lengthy process and Poropat estimates he’ll be able to paint a clearer picture of the Highland’s count results in January.

He’s noticed an influx in birding interest over the past two years. “Especially during COVID-19, people want to find ways to be outside,” said Poropat. On the rail trail, he points ahead off the trail; a warbling call echoes from the thick bush.

“We’ve got a raven there,” he said. Poropat loves birding for “a whole bunch of reasons. I love being outside; the challenge of looking for stuff and finding things that are unusual,” he said. “I love the camaraderie, the guys that I go out with.

And from the other perspective, it’s citizen science, it contributes to science.” Poropat also leads birding excursions through the Haliburton Highlands Land Trust.

It’s a way for people, Poropat said, to “make a connection with the land around them, and what lives there. Once people develop that connection, they’re way more apt to connect with it.”