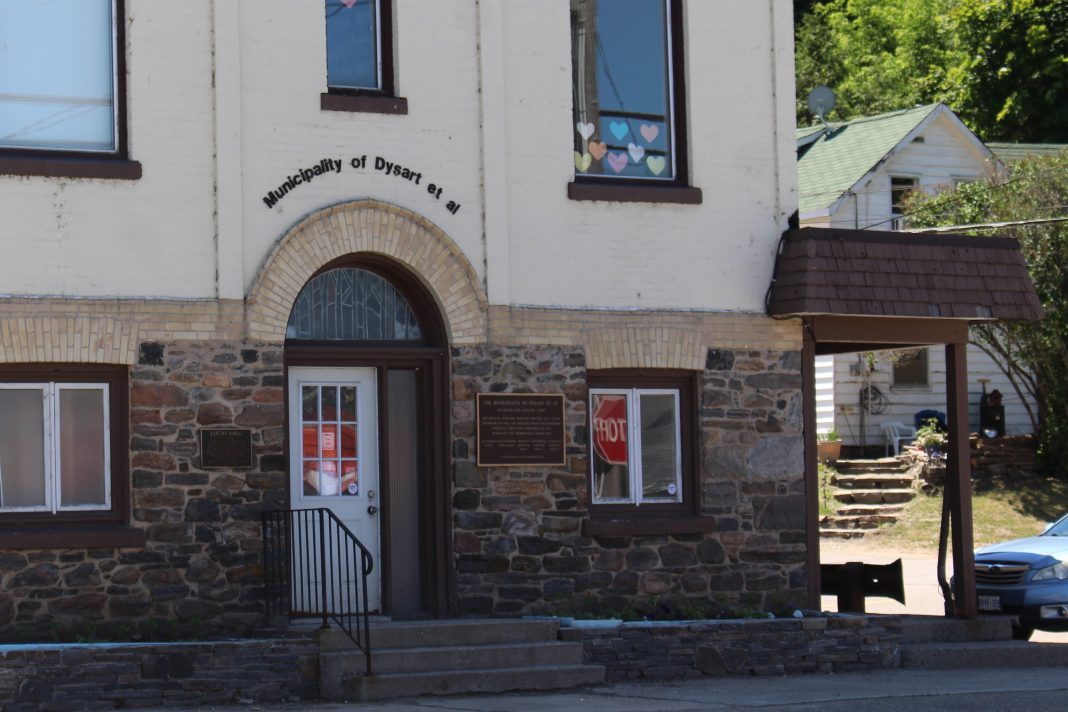 Dysart’s top two elected officials have been given the green light to continue participating in talks over the proposed Places for People affordable housing development slated for Wallings Road.
Mayor Andrea Roberts and deputy mayor Pat Kennedy were each accused of having a conflict of interest by area resident Andy Muirhead who, in a recent letter submitted to council, asked that they recuse themselves from any future discussion of, and decision on the prospective development.

Muirhead’s claims stem from the fact that Roberts resides on nearby Halbiem Crescent and is a member of the Haliburton By The Lake Property Owners’ Association, whose president Tim Negus appeared before council Nov. 23 to voice his group’s collective opposition to the Places for People project.

Kennedy has family who reside in the neighbourhood. The project has hit something of a snag in recent months, with the County expressing concern over the ability of the existing Wallings Road/CR 21 intersection to handle what would be a massively increased flow of traffic.

It has been suggested that a go-between road connecting Wallings and Halbiem could alleviate those concerns.

Muirhead indicated that since Roberts and Kennedy have “actual or clearly apparent conflicts surrounding the consideration of traffic routing” at the location, that they couldn’t be trusted to make an impartial decision.

He went as far as to suggest that council, influenced by Roberts and Kennedy, had deliberately avoided properly discussing a potential Wallings/Halbiem thoroughfare – something he believes would be the “safer and more reasonable option.”

While an official complaint has not been submitted, Roberts and Kennedy took it upon themselves to reach out to the municipality’s integrity commissioner, Harold Elston, earlier this month to get his input on the situation. “Deputy mayor Kennedy and I felt it best to face the allegations head-on,” Roberts said.

In her correspondence with Elston, Roberts asked three questions: if, as a member of the HBTL property owners’ association she was in a direct or indirect conflict when the president appeared as a delegation to express the group’s opposition to the development; does the Municipal Conflict of Interest Act have an exemption where the interest of the general public overrides any direct or in direct conflict; and does she have a conflict over discussions regarding the intersections of Wallings/CR 21 and Halbiem/CR 21.

Elston found that, since HBTL does not have a direct pecuniary interest (financial) in the matter, Roberts did not have a conflict. In Kennedy’s case, he asked Elston if, since his daughter resides in the HBTL subdivision and may be affected by decisions made concerning this project, he is in a direct or indirect conflict pertaining to potential changes to the road access, or the project in general. Elston determined he was not.

“As I understand it, your daughter’s home is not a competing development site, nor is it adjacent to the property that Places for People would like to purchase and develop … Their property is at a considerable distance from the site and will not be impacted in any way by the proposed development. Accordingly, your daughter does not have a direct pecuniary interest and, therefore, you have no deemed direct pecuniary interest,” Elston wrote.

“Based on what you have told me … you may participate in these matters without fear of contravening the [municipal] code.”

They do it for love, not money