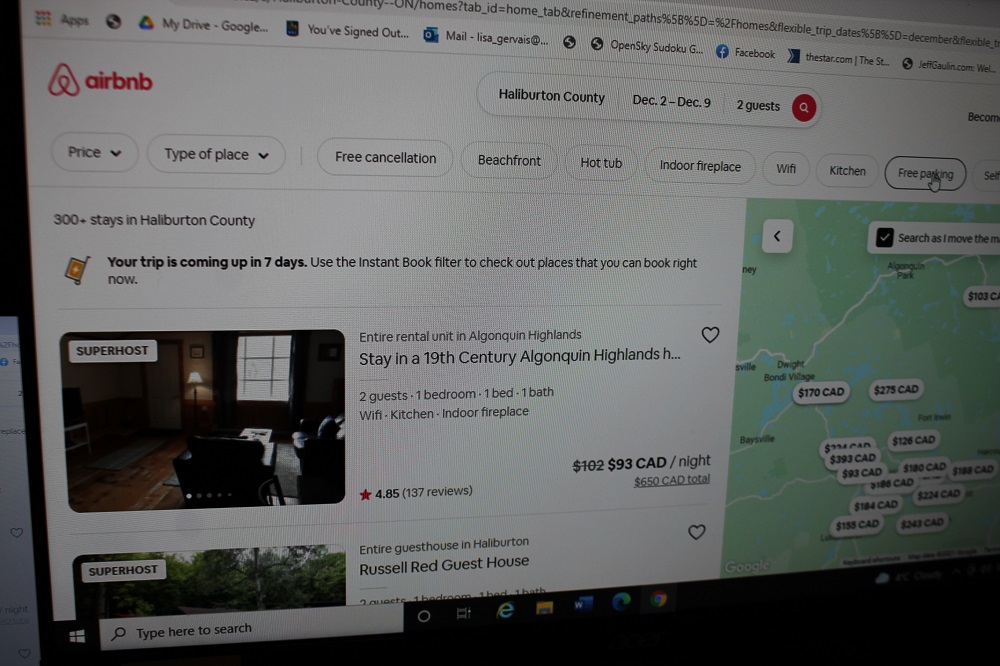 Haliburton County council has selected one of the firms from its shoreline preservation bylaw process to now spearhead its short-term rentals’ review.

The project has been awarded to J.L. Richards and Associates at a cost of $55,235.55 plus taxes. The County will fund half the cost and the lower-tier governments the other half.

On July 28, council approved a request for proposals for consulting services to assist in the review and consultation for the County.

Director of planning, Steve Stone, in a report to the Nov. 24 meeting, said the plan is to do a community survey, technical literature review, analysis of context, and public consultation – leading to the development of shortterm rental policies and regulations specific to the Highlands.

A technical literature review means finding and summarizing best practises for protecting the public’s quality of life with short-term rentals. It includes a look at what has recently been published by accredited land use policy and regulatory specialists.

“The Council for the County of Haliburton has identified the protection of its settlement and lake side neighbourhoods as a significant policy area within this term of their Council,” Stone said. “It is expected that upon completion of the objectives outlined … the successful candidate/ firm will then be in a position to guide the development of a final Short-Term Rental policy and regulations to be considered for implementation by the County of Haliburton.”

The County received one other bid, from Granicus.

However, Stone said J.L. Richards Ltd.’s submission stood out for a number of reasons, including their overall approach to the project, an engagement plan with stakeholders that will be tailored to meaningfully secure input and buy-in from the local community, completion of similar projects, experience and qualifications of project team and previous experience with small and rural municipalities.

Stone said the work will be done in the first quarter of 2022 and will be completed by the end of March.

Algonquin Highlands Mayor Carol Moffatt commented that the analysis of context requirement could be problematic since they tried that with the shoreline preservation bylaw.

“And we know that the response to that was that inquiries were made to other municipalities, to provide context about their own shoreline work, and we were told that nobody called them [the consultants] back.

“So, I would just hope that knowing that, going into this process, that we would require a little bit more … it seems strange to put in an RFP and have the proponent come back and say we’re going to check with everybody. I just don’t want to hear at the other end that they checked and nobody called them back.

“I think the local comparators are vital in these kinds of things. It was missing from the shoreline preservation bylaw and I don’t want to see the same piece missing here.”