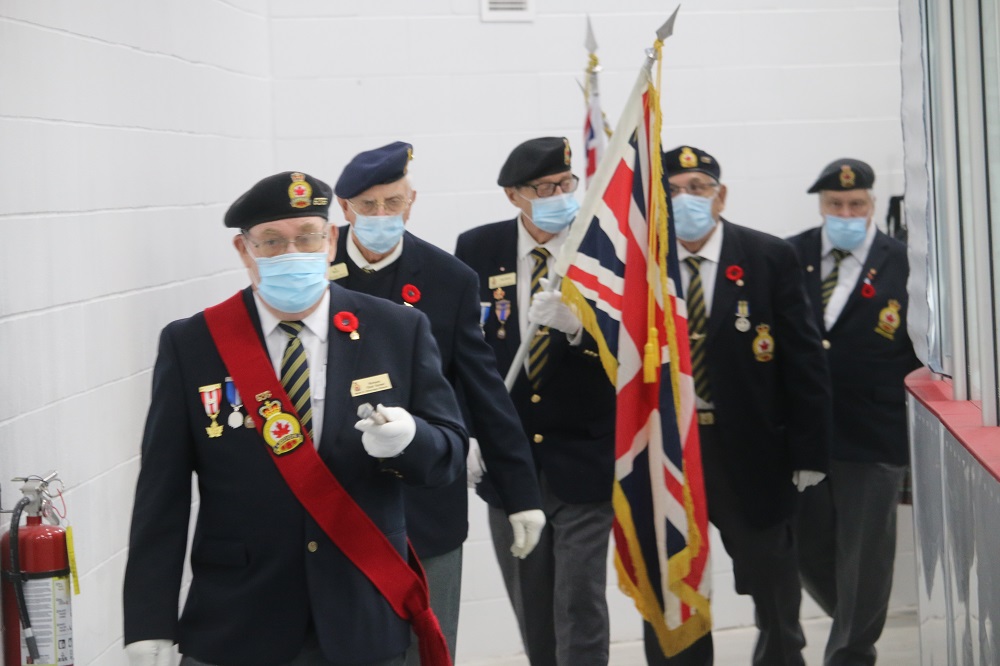 The temperature rose gently into a November comfort zone last Thursday as people gathered across from the Cenotaph in Haliburton.

As I walked up from the parking lot, the colour party and band were proudly marching down Highland Street to the annual community Remembrance Day ceremony. A smaller than usual crowd was on hand to pay their respects, but, considering concerns about COVID-19, it was perhaps a better than could be expected turnout.

As I glanced around I could see that most people were masked and making an effort to distance themselves from others not in their group. Before the formalities began, I noticed an unmasked man standing near the curb holding a tall piece of plywood on which he had scrawled a message.

It was an anti-mask and vaccine passport screed that riffed off the remembrance theme of the day. Initially I was upset to see the protest board. I was angry because I disagreed with the thrust of the message.

Masks and vaccinations have saved hundreds of thousands of lives and made it safer for all citizens in our community and country. These are things we do for ourselves and our community’s wellbeing.

As I have stated before in this space, I believe in the science that provides the basis for these and other measures to keep us healthy. Secondly, I thought: not here, not at this memorial for the community veterans who died for this country, in two world wars, and those who served and returned home.

I always thought of the Remembrance Day ceremonies as having the solemnity worthy of the sacrifices by the men and women of our armed services. It is but a brief moment every year when we pause to reflect, offer thanks, to remember. The occasion deserves a moment, undisturbed.

The presence of the sign was offensive to me. It reflected poor judgment and lack of respect for the day. The ceremonies, including the reading of the names of those from Haliburton County who died in the two great wars, The Last Post and the prayers, unfolded as it always does. Beyond propping up the sign, as far as I could see, the man made no other effort to inject his illinformed message on those of us who had gathered last Thursday.

Driving home I reflected on the moment and wondered what our fallen soldiers might have made of the display. I am sure, they would have been dismayed and angered by this intrusion….that the ceremony was too important and personal for this type of intrusion.

They would have trouble reconciling why they risked or lost their lives to allow the imprudent dissemination of information that could potentially result in even more casualties. I imagined them thinking, not here, not now.

Make this a local Christmas