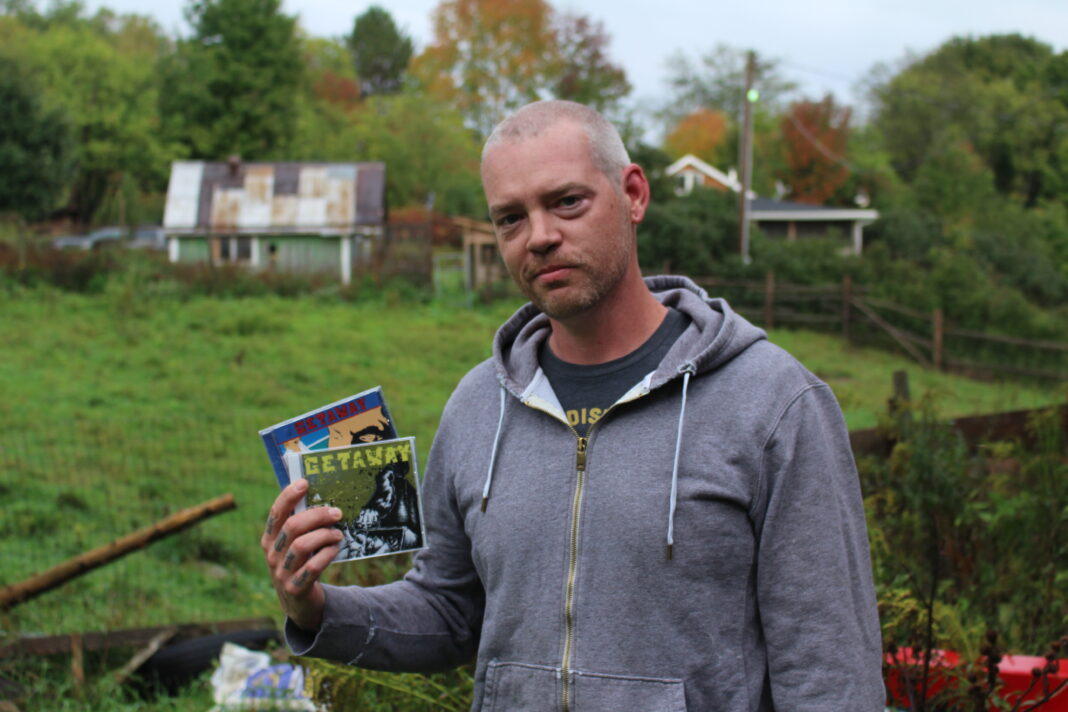 Matthew Wesley is a building inspector living amid rolling hills of trees and thick bush near Minden.

On his organic farm, he and his partner and their kids tend to goats, a few chickens, a new litter of puppies, trees tapped for spring maple syrup. In his basement, there might be a computer hard drive.

On it, guesses Wesley, might be a musical ghost. The phantom in question is a collection of digital music files.

They represent the culmination of his former life as a singer in the fast-paced world of punk rock, shredding stages from Newfoundland to Florida, sharing festival lineups with Blink182 and working with some of the biggest names in music, poised for a leap into stardom.

The 10 songs make up the final unreleased album from The Getaway, called Left for Dead.

Now, Wesley and his bandmates are living out a punk rock resurrection. He received word the album is being picked up by a Quebec-based record label that released it Sept. 17 across streaming platforms. “I hadn’t listened to it in a long time,” said Wesley.

He said he now dials up the tunes while driving. “I’m proud to say it really holds up!”

Wesley was The Getaway’s lead singer, joining in 2001 when Punk was spreading like spikey-haired wildfire, connecting with a generation that felt unheard, and often let down, by the political class of the United States and Canada.

Out of Toronto, the band’s day-to-day was grinding for what could come next. “Every moment you’re like ‘how do we get to the next level. How do we book this show, who’s going to put out our next album?’” he said. Level by level, they moved up. Channeling wild energy on the stage (Wesley was known for lighting firecrackers mid-show) the band toured Canada.

They were one of the first of the genre to travel to Newfoundland, and shook the walls of high school cafeterias in Heartland, New Brunswick, parkside clubs in Halifax and downtown bars in Montreal.

The fanbase was building, their music was connecting with more and more people. They even played the Haliburton Arena, though punk rock didn’t have a huge following in Wesley’s homeland. It felt like a breakthrough was coming.

“Everyone had their own idea of how we were going to break through and make it,” said Wesley. “When you’re in a band that’s pretty much your number one, friends, family, relationships. Those all take abackseat to it. Not everyone is going to be okay with you doing that.”

Sailing through cities across the States, coming into contact with the “broken and those who’d fallen through the cracks” of the American dream, influenced Wesley’s songwriting.

With a snarling guitar, muted strumming complemented by the thumping drums, he wrote about heartbreak, growing up and coming face-to-face with injustice. The band connected with Joe Escalante, a producer with worldwide acclaim who worked with the biggest punk bands alive, including Blink-182 which many critics, including The New York Times, claim is the most influential band in punk history.

He connected them with Ocean Studio in Burbank, California, where they recorded songs and melodies.

“We really thought we were going to have an opportunity there,” he said. The producer was one of the best in the business, going on to work with the Lumineers and The Cold War Kids. “We’d seen some pretty big disappointments,” Wesley said. “It seemed that this was the next plateau and this would be a jumping-off point.”

Their record label, caught in industry drama surrounding another band, folded. But The Getaway’s record was legally bound to the label and stuck in limbo. “Everyone remembers it differently,” said Wesley. “For everyone, it was a bit of a traumatic experience.”

Wesley and his bandmates moved on. Some stayed in music, Wesley went back to school and soon embarked on a successful career in planning.

“It all stopped,” Wesley said. “There was no more gas in the tank.”

Anthony Grenier co-owns People of Punk Rock Records. He launched the label to support punk rock in Canada, transitioning from a Facebook page where he shared band videos and photos.

Early in 2021, Adrian Mottram, a member of the band, bought a record from People of Punk Rock’s online store.

He sent a message to Grenier and asked if he wanted to have a listen to their long-lost album. “I’m no musician,” Grenier said. “When I listen to an album it’s like I either like it or I don’t.” He listened to Left for Dead 10 times in one day.

“What we like to do is release really cool stuff. It was a good opportunity to release something which makes people go ‘wow, this is something really cool that was supposed to be released 15 years ago, but it’s out in 2021.’”

“That just never happens. We worked really hard to get record labels to notice us.

For a label out of the blue to say they really like it, they want to put it out – that’s huge. It felt like it was something that was unfinished and it was always going to stay that way,” Wesley added. Wesley said there’s been some chatter between bandmates.

Should The Getaway play some shows? Revive some of the early 2000s punk rock? He won’t rule it out, but the thought of heading on the road in a bus seems a lot less tempting when he has a family and a full-time job.

The future of the band might not be the main point, he said. ‘When I thought the only ones who remembered us were us; it’s really special.”