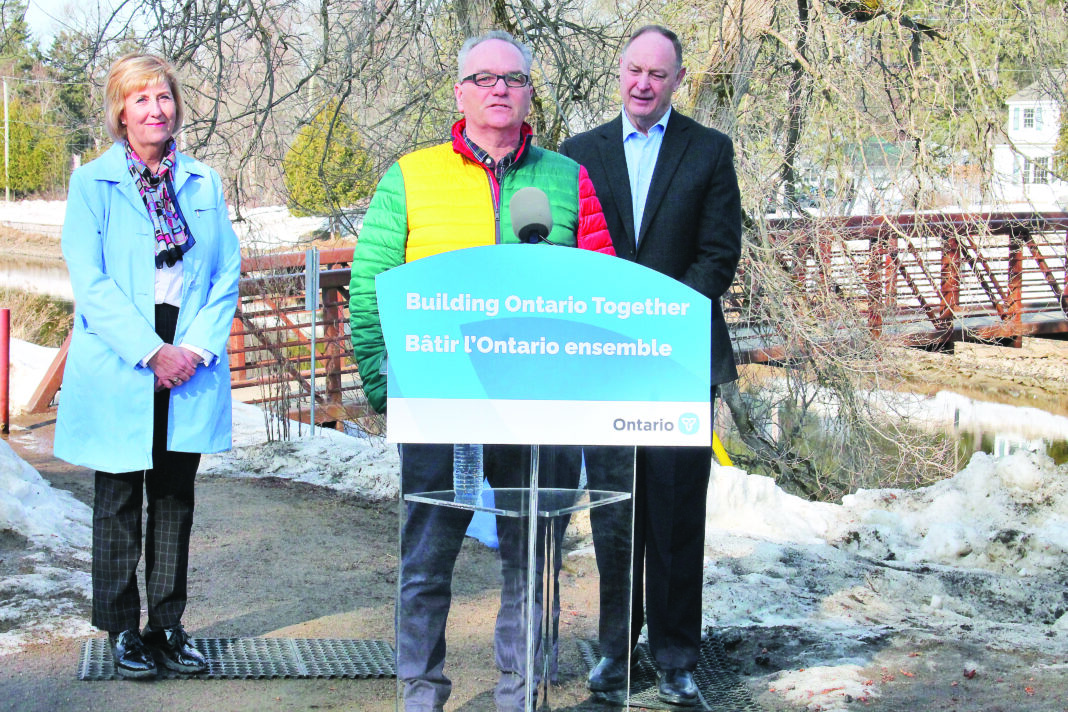 Haliburton County has to “beg and scrape” for provincial money to support its watershed projects while ‘the Muskoka millions’ continue to flow, Algonquin Highlands Mayor Carol Moffatt told a township council meeting Oct. 7.

During a Muskoka River Watershed communications committee meeting in late September, Moffatt, who sits on the committee because the watershed partly falls in Algonquin Highlands, said she learned about provincial government funding for work in the Muskoka watershed.

She was referring to an April announcement in Gravenhurst that the Ontario government is investing more than $4.25 million on 16 projects to further protect that watershed. According to a Ministry of Environment, Conservation and Parks press release, the funding would help safeguard the region from environmental pressures, such as severe weather and flooding, while also improving the health of the watershed.

Moffatt said one of the projects is a hydrology model for Muskoka. “I’ve been waving the angry flag for some time that Haliburton County is miles ahead in its integrated watershed management process and relationships and modelling, and we’ve had to beg and scrape for every cent and this is just some more money … the Muskoka millions,” she said.

Moffatt added, “It’s frustrating that a neighbouring municipality continues to receive tremendous amounts of money to address problems that neighbouring communities and other jurisdictions across the province are facing.”

Coun. Jennifer Dailloux commented, “I wonder if now is another moment to write a letter and say there are equity issues here. Cottage country across Ontario is vast and it isn’t just one region. We all have these same questions and we’ve said it before, but we’d like to say it again now.” In August 2018, Ontario announced a $5 million Muskoka Watershed Conservation and Management initiative.

In August 2019, the MECP established the Muskoka Watershed Advisory Group. The Ministry of Natural Resources and Forestry did release its Protecting People and Property: Ontario’s Flooding Strategy in March 2020 in Minden. However, there was no money specifically announced for Haliburton County.

And while the County of Haliburton received $175,000 from the National Disaster Mitigation program to assist with flood prevention planning in 2017, that was federal money for LiDAR mapping of the Burnt and Gull River watersheds following significant flooding.

Moffatt said municipalities within the local watershed have forged relationships, including with the Coalition for Equitable Water Flow and the Trent Severn Waterway, and have expertise, yet she feels the County has been slighted. “In some ways [the two watersheds] have different battles, different hills to climb, but when they [the province] issue a press release that says, ‘The Muskoka region is one of Ontario’s crown jewels, and we want to ensure that we continue to protect its environment which is so important to the local economy and the great people who live there, said Premier Doug Ford … well I think there are a lot of other jurisdictions in Ontario that would like to receive that same largesse over and over.”

Moffatt indicated it is a County of Haliburton issue and she would be talking to deputy mayor and County warden Liz Danielsen about raising it there in future.

Haliburton-Kawartha Lakes-Brock MPP Laurie Scott said that in April 2021, the Ontario government announced an initial investment of over $4.25 million to fund 16 projects to address flooding and the watershed health of the Muskoka River Watershed as previously announced in 2018.

However, she said, “our municipalities have been working hard to protect local waterways including a successful application through the Great Lakes Local Action Fund to create a sustainable, citizenbased model of benthos biomonitoring in the Haliburton, Peterborough and Kawartha Lakes areas to identify early indicators of lake issues. “This was one of the 44 community-based projects to receive $1.9 million in funding through the Great Lakes Local Action Fund. This fund supports local projects that protect and restore coastal, shoreline and near shore areas of the Great Lakes.”

Scott added, “our government is committed to protecting and conserving our environment and we want to ensure that Ontario’s natural beauty can be enjoyed for generations to come. That is why we created the Made-in-Ontario Environment Plan outlining practical, sensible, and affordable solutions to some of our province’s most pressing environmental concerns.”