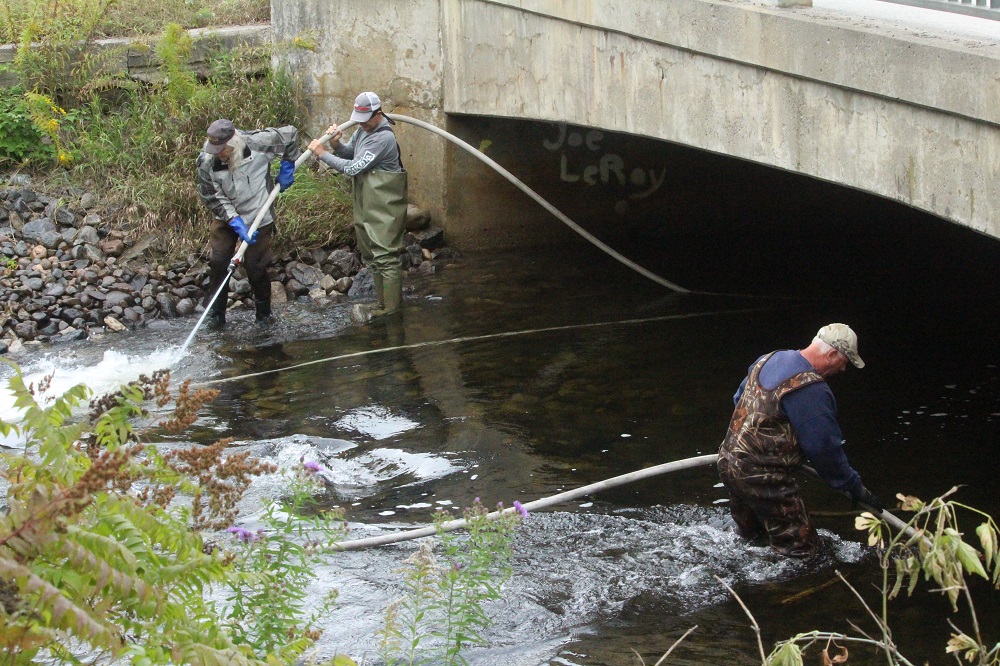 The Haliburton Highlands Outdoors Association (HHOA) brought hip waders and fire hoses into the Drag River Sept. 14 in an attempt to boost the waterway’s Walleye population.

Volunteers washed away sediment from between the rocks under the Highway 118 bridge, a busy spawning site for the fish.

HHOA Director Tim Bahr explained how Walleye eggs won’t stick to rocks when sand and silt get in the way. That could be a reason why Bahr and so many other local anglers have noticed a decline in the tasty fish which is popular for sport fishing.

“It’s one thing that people like us can do to help the fishing,” Bahr said.

Eighty-two per cent said they’ve noticed a Walleye decline throughout the years, and 33 per cent report poor fishing conditions.

“We have heard from many anglers that the Walleye fishing in the Kash Chain has declined significantly,” said Dan Smith, HHOA President, in a press release. “We plan to work with the MNRF to do all we can to improve the fishery.”

Fifty-one per cent of people who responded to the survey said they fish for sport, only keeping the odd fish. Respondent’s concerns included big boat traffic, shoreline development and inadequate fishing regulations that might be causing a decline in fishing conditions. Besides a survey polling those with the bait and reels, the HHOA is also keeping an eye on the fish themselves.

They restarted their Walleye Watch Program this spring to monitor the Drag River spawning site. Retired Fleming College Fisheries and Limnology Professor Denis McGee helped 14 HHOA members stake out the site for 25 nights, measuring the quantities of Walleye eggs in the spawn site. They counted 1,334 Walleye.

The fish were first introduced to the Kashagawigamog chain in the 1950s. It is now one of the most popular fish to catch in Ontario, however shortages have been reported on multiple lakes and water systems. If populations continue to decline, Bahr predicts the sport fishing industry could suffer, or other species could be overfished.