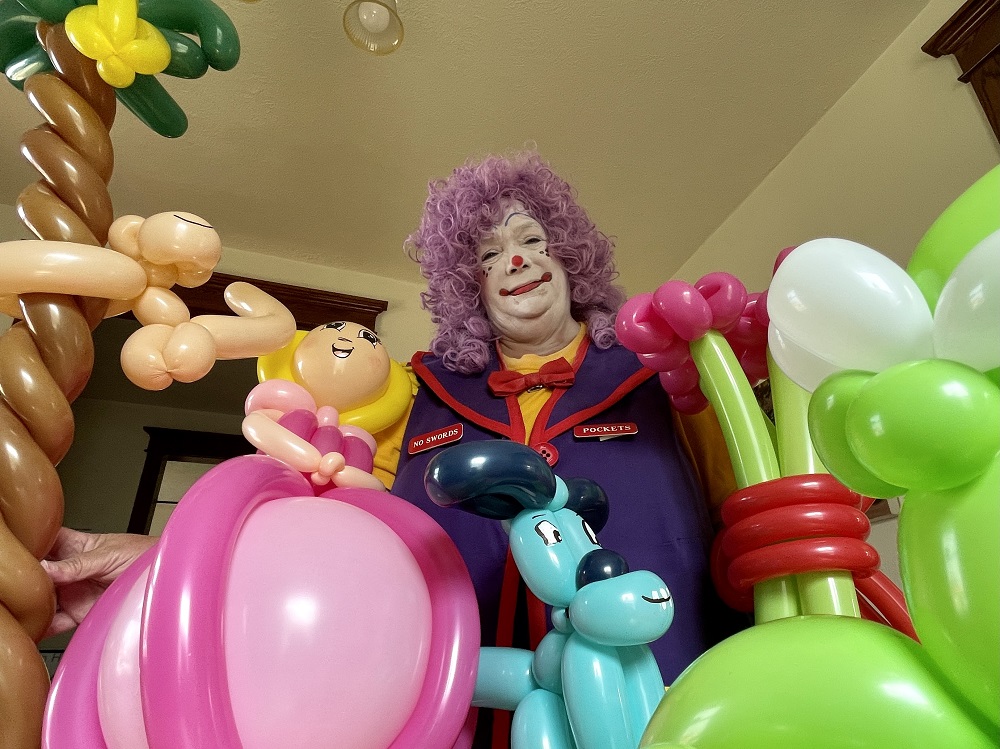 Pockets the Clown twirls pieces of string in both hands. One moment, they appear to be different lengths. With a deft flick of her hand, they suddenly seem exactly the same.

That’s just one of the tricks and skills Pockets has perfected in her 30-year career as a clown, performing at birthday parties, seniors homes, assisted living centres and hospitals around the GTA.

Now, she’s bringing the magic to Haliburton. She and her husband recently retired to Wilberforce.

“I’m just restarting the business up in this area,” said Pockets the Clown, whose alter ego is Colleen Smith.

“While I’m here I maybe will only do one or two shows. I’m not going to do the full schedule I had there. I’m going to do what I can so that I can still enjoy this beautiful country.”

For Smith, the joy of clowning is focused on the smiles and giggles of her audience. She’s soft spoken, and said being gentle is as central to Pockets’ persona as her frizzy wig or face paint.

“The most enjoyment I get out of this is the smile on the children’s faces and the laughter I hear from them,” she said.

Her specialty is birthdays, where she creates elaborate balloon creations, performs magic and, before COVID19, showcased her artistic skills through elaborate face painting.

While Pockets can twirl princesses, puppies and a bouquet of flowers from balloons in seconds, she wears a “No Swords” badge: she believes clowning, like the rest of life, should be about peace and kindness.

While employed as an accountant, Smith approached her father, Twinkletoes the Clown, to see if she could use clowning to supplement her income.

“I said ‘can you show me how to be a clown?’ And I’ve been clowning around every weekend ever since.”

She’s been to conventions for clowning around the GTA, as well as travelling to the famed Red Skelton Clown school, Mooseburger Clown Arts camp in Minnesota and even multiple weeklong worldwide clown conventions in Washington D.C. Now she’s started passing on her skills: Smith’s daughter has been learning the ropes as well.

Throughout Pockets the Clown’s career, North America’s relationship with clowning has gone through a rough patch. Fictional depictions of clowns like that of Pennywise, from IT, meant Pockets faced threats and cruel messages online.

“It was a difficult time to get through to make sure that the person that’s hiring you knows you’re not the Stephen King clown. That’s a movie. This is a happy go lucky clown and my job is to entertain and make children laugh, not make them scared,” said Pockets.

She doesn’t use horns, and said she’s extremely careful to not startle kids and other attendees when she performs. Usually, the ones who might be timid around her experience a change of heart, she said with a smile.

“Usually if there’s a child who is scared of me, they’re my best friend by the time I go, and they don’t want me to leave.”

Pockets the Clown said that’s the highlight of clowning: seeing how her work can make even one child smile or giggle. She often performs for children with autism.

“When they see me or they will let me paint their face, or interact with me when I’m giving them a balloon, or laugh while I’m doing my magic show, and the mom comes up to me and says ‘my kid doesn’t do that’,” she said. “That says I’ve done my job.”

Board members pan Dysart for plan to charge rent for assessment...