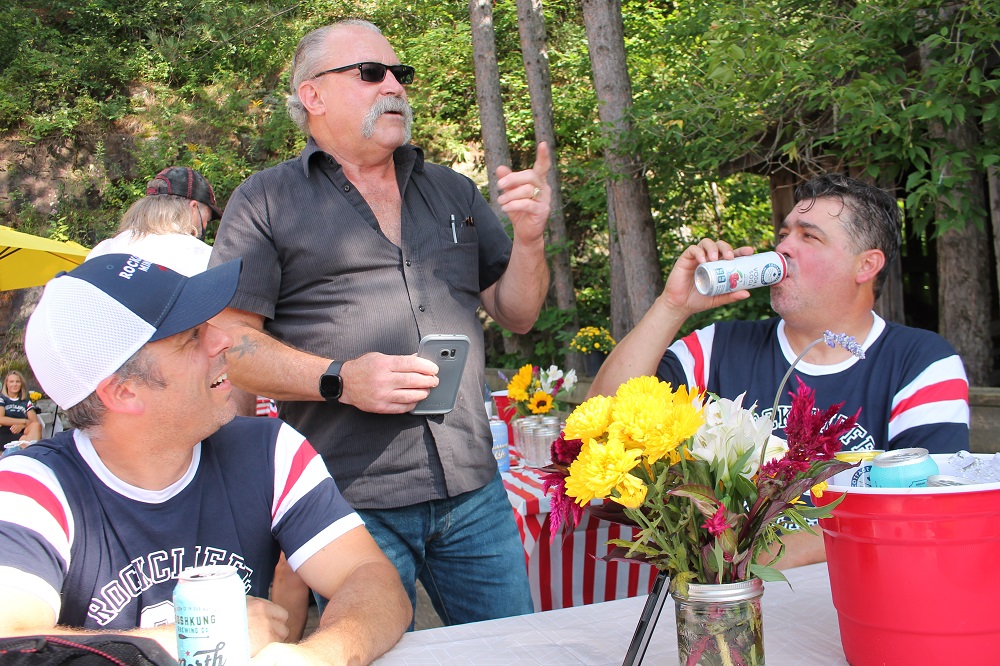 During a gathering on The Rockcliffe patio Aug. 12, new co-owners Mark Dracup and Dan Gosselin were seated at a picnic table when a former customer strolled over.

“Here’s how much I miss Friday at The Rockcliffe,” he told them. “About two years ago, it was a day not unlike today. I came outside on a Friday. So, what do I do? I go to the Beer Store and I sit out front and have a few beers.”

Dracup chuckled at the story and said, “hopefully in two years, you’ll be doing the same thing.”

Dracup and his wife, Lise, and Gosselin and his partner, Kirsty Goodearle, are the new owners of Minden’s The Rockcliffe.

The group hopes to have the legendary tavern resurrected in 2023.

Last week, they decided to invite former owner Dave Willis and staff back to the corner of Bobcaygeon Road and Newcastle Street because they think it’s important to let the past mingle with future plans.

Goodearle said it was a case of, “Paying homage to what it was. A legend. Everyone who knows Minden knows The Rockcliffe, right? I think it’s really important for us, the new owners, to get a feel of what actually made it legendary and we want to respect that and bring to light everything that was super important back then, what everyone knows about The Rockcliffe, the Hoser burger and the apple fritters, just the random good times, anything goes. We want to do that and the best way is to talk to the old staff.”

Their ownership came about when longtime cottager, Dracup, met new cottager Gosselin. On Tuesdays, the wives were away and the two men would take turns feeding each other and having a few drinks. They called them ‘Terrible Tuesdays.’ “

Many late nights and a lot of booze and The Rockcliffe always came up as a topic,” Gosselin said. “Finally, I just said ‘can we just go and look at this disaster, so we can shut up about it’?”

The place had been vacant for about six years.

Dracup had visited it in the past, as much in winter when snowmobiling as in summer and remembered “it was the place. It was the only place. This is what you did.”

Gosselin said when they first got their cottage, even before meeting the Dracups, the property had caught his eye due to it being a prime piece of real estate, which “sets the tone for this town.” He said with new people flocking to the area, it doesn’t set a great tone at the moment. He reckoned, “I can throw a party like anybody else and have a good time.”

“We’re hopeful that we’re going to be able to proceed with those plans and our goal is to resurrect not only the building in a new image but also the spirit of The Rockcliffe.”

Pending all necessary municipal approvals, they plan to demolish the old building and erect a new one. They have also purchased the former Dollo’s site, which is now a vacant parking lot. They hope it will be used by snowmobilers and off-roaders as a staging area, with people spending time at The Rockcliffe.

The plan is for a new bar and restaurant with both casual and higher-end food and drinks and hotel rooms.

There is talk of possible affordable housing units on the former Dollos land.

Willis, who owned The Rockcliffe for 33 years, said after two prior sales in which the owners could not make it work, “they’re very serious and it’s what the town needs. They need apartments, they need suites, nice fine dining and casual food.”

He added, “I wish them nothing but tremendous success. Because right now it’s sort of an eyesore and for quite a few years it was quite famous. I was here 33 years and I heard 33 million stories. I think Mark [and the other co-owners] are going to carry on the dream.”

Been there, got the T-shirt

It was Willis who came up with the iconic Rockcliffe University and graduating year T-shirt.

When he bought the tavern, he said the existing T-shirt slogan was, ‘I’m a Rockcliffe beer nut.”

However, he said shortly after buying the bar in 1977, he was hauled in by the Liquor Board and told the word beer on the shirts was offensive. He said he pointed out to them their retail outlets were called Beer Stores. “And they said, oh, that’s different.”

He said he asked about calling it The Rockcliffe University and they said “sure.” On the drive home, he thought it would be great to add a graduating year with new T-shirts every year. “

He said he wore a 1981 version of the T-shirt to Ontario Place and 20 people came up to him because they recognized the name. He said he saw one in Johannesburg and knows they are in Fiji and Jamaica.

He said he bought the bar at a good time, when “the people were breaking loose and it was a great social. They were lined up to get in at 7 at night. Countless how many people said they met their wife or husband here. I was always saying, ‘I bet you wish you hadn’t come in that night’.”