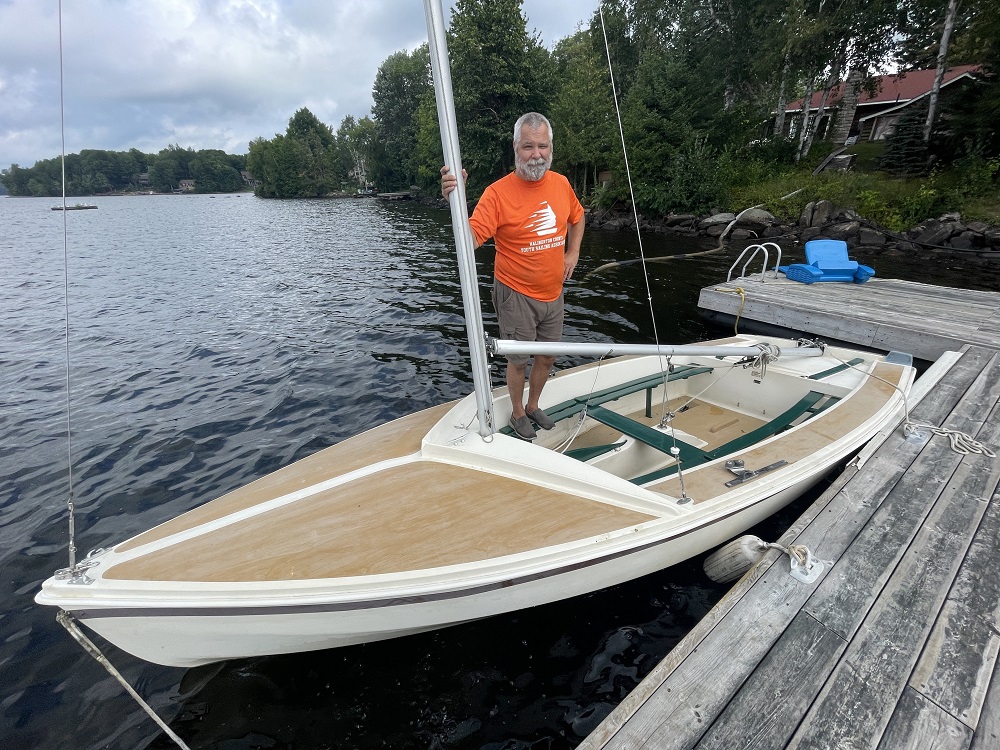 A few times a week, kids from around Haliburton County can be spotted speeding across the waters of Twelve Mile Lake near Minden.

They’re sailing; often sitting on the front of the boat, and sometimes hoisting the sails themselves as they cut through wind and water.

Robin Carmount has been the director of The Haliburton County Youth Sailing Association since it began in 2019, and he’s looking to add to his group of dedicated volunteers to provide what he says is an important service to County youth.

“It’s one of those cool things that they can tell their friends about,” the police officer said.

Volunteers don’t need to know how to sail (though it’s recommended) to impact kids’ lives through the association. In fact, Carmount himself is still, literally, learning the ropes.

“I’m a YouTube learner, just learning on my own,” he said with a smile in front of the Red Umbrella Inn. Volunteers can help with everything from car rides to supervising kids on shore.

Gesturing towards the water, he marvels at the community support the group receives. Cottage associations donated boats and Haliburton Home Hardware provided a fridge filled with snacks from Haliburton Foodland. Carmount points to his sailing association shirt, donated by COHO Apparel. The inn lets the club use an outbuilding as a storage spot. They also rent out a sailboat to guests, the proceeds going directly back to fund the young sailors.

“It’s totally community driven,” Carmount said. And he added that community investment pays off on the water, as kids learn valuable skills and face their fears.

One of the kids got to pilot a Laser, a one-person dinghy, by themselves after practicing for a summer. “That’s a huge achievement. I’m pretty sure the year before he never would have thought he would be sailing a sailboat by himself,” Carmount said.

Another young girl fearful of the water and the possibility of storms ended up sitting on the front of a boat with “no fear at all.”

“I just like to see the look on their face when they come here every week,” Carmount said.

Charting a course to Highlands East

The sailing club is expanding. Carmount said that some kids who live in Highlands East want to participate, but the lengthy drive makes that difficult. “So, what we’ve done is bring the sailing to them.”

That’s where Highlands East Mayor Dave Burton got involved. Burton volunteered his dock on Wilbermere to store a sailboat which might soon be piloted by nearby children.

“I think: what an opportunity for our youth here and throughout the County,” Burton said. He said he was glad to move one of his own boats out of the way to make room for the club, and hopes many kids take advantage of the program.

Being out on the water, said Burton, can be a therapeutic experience.

Carmount said the Highlands East location will serve a community of kids which sometimes “get left behind.”

“I think it’s a really cool thing for kids to learn over there,” he said.

That’s why he’s inviting volunteers to join up, giving kids the gift of time on the water and the chance to learn new skills along the way.

Tashlin and Williams: ‘people we ought to look up to’