Home Business A new era for vinyl and vintage shops 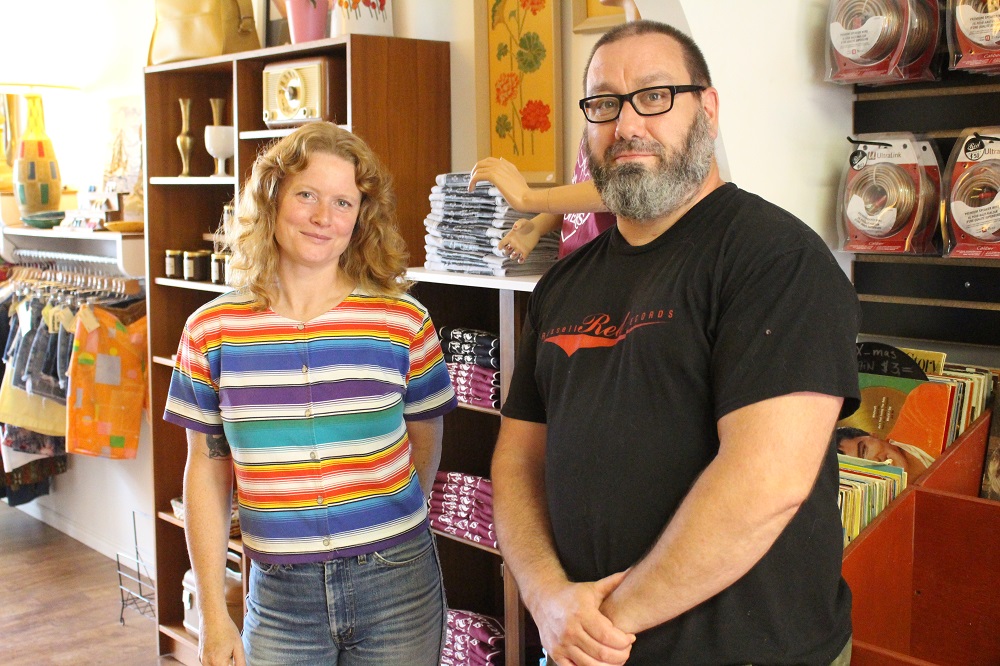 When Russell Red Records and Mixtape Vintage opened in 2019, neither owner thought their shops would be a permanent fixture on Haliburton’s main street.

Two years later, with a new location and renovated retail space, the businesses appear to be here to stay.

Heidi Hudspith of Mixtape Vintage and Dan Manley of Russell Red Records joined forces in 2019 while hosting a pop-up shop. After lots of interest, they moved into a retail space across from Highland Street’s Rexall. But that store didn’t feel like a permanent home.

“It always kind of felt temporary,” Hudspith said. “Now, we have room to grow.”

Their new shop is at 173a Highland St. Manley’s records are spread along each wall: classic rock, pop vinyls are placed alongside brand-new albums from artists such as Taylor Swift.

Mixtape Vintage takes up the back of the shop. Hudspith sources retro clothes and accessories which hang artfully on either side of a picture window overlooking Head Lake Park.

Manley explained how the pair had far more creative freedom when they designed the new store’s layout.

“Coming in here, we were able to start from scratch,” he said. After opening their doors in late June, business has taken off.

“Sales here have increased so much compared to last year,” Hudspith said. “I didn’t think it would start until Canada Day, but every day last week there was a huge wave of people coming through.”

She and Manley think that’s because their new spot is close to the park and a busier section of Highland Street.

“Essentially, it’s a difference in the location in town, there’s a psychological barrier in the location of the lights,” said Manley, referring to the intersection of Highland Street and Maple Avenue. “This [location] is just more conducive to people going by, coming up from the park.”

Besides busy foot traffic, the fresh start gave both business owners a chance to expand their selections.

“It’s turning a bit into a sustainable lifestyle store,” Hudspith said, gesturing to the cups, lamps and more which are recycled and given new lives with each purchase.

Hudspith said that picking out cool vintage products and connecting them with the perfect customer is a highlight of the job.

“The retail part of it is the fun part of it for me,” Hudspith said. “Seeing [customers] find something they love and take it home – that part is what makes it for me.”

That meant the last year, for both Hudspith and Manley, was especially tough.

COVID-19 forced the shops to close their doors to foot traffic multiple times. That, along with renovating and moving, made for a tiring year.

But the renovated space is now open; bustling with more customers, records and handpicked vintage goods than ever.

“When we found this location, that was kind of a big incentive to keep going,” Hudspith said.