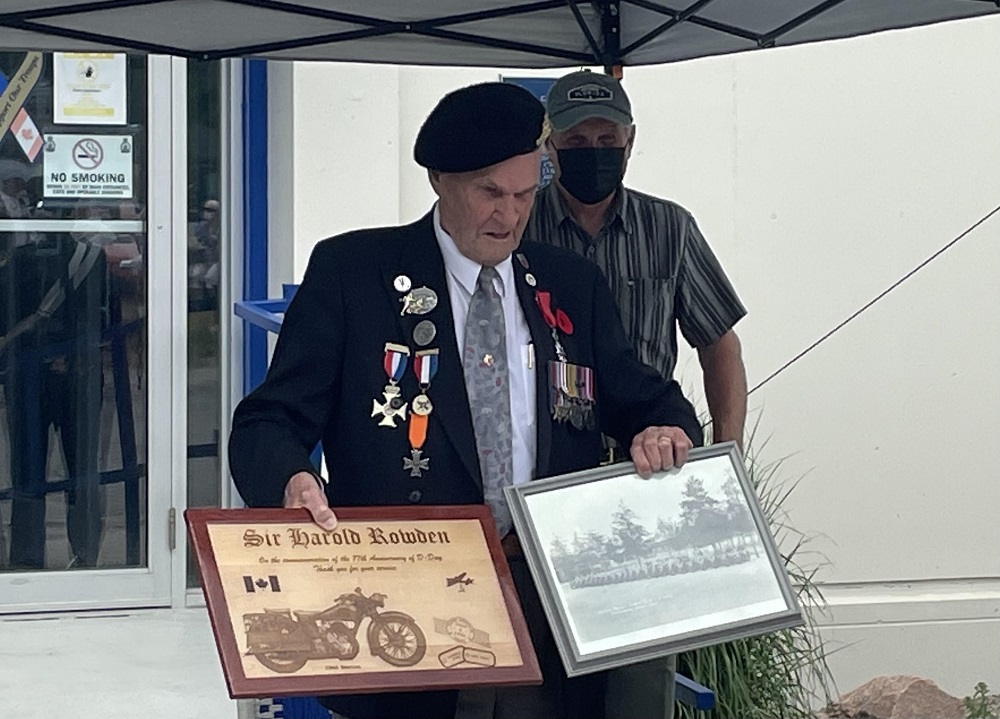 On June 6, 2021, Sir Harold Rowden, who was part of the D-Day advancement, was honoured with a special celebration.

The veteran, whose 97th birthday coincided with the anniversary, was a member of the 13th Field Artillery Regiment.

Flanked by Legion members, he waved and saluted as 64 motorcyclists paraded past – in homage to his service as a motorcycle courier; a job which saw him exposed to Axis forces while delivering messages to different military units.

“My officer would give me a message to take to the front,” Rowden said.

Upon delivery, “the boys would run up to me and shake my hand.”

After his service in Normandy, Rowden was named a Knight of the French National Order of the Legion of Honour.

Sir Harold recently moved from Orillia into the Gardens of Haliburton retirement home in Haliburton Village.

“I’m very thankful to have him in the community,” said Haliburton Legion President, Don Pitman. “And to have the show of love from all the riders that came out today and the people that took the time to organize it and show respect.”

Mark Duggan played a key role in organizing the ride.

“We wanted to pay tribute to Harold, and thank him,” said Duggan, who became friends with Rowden over the past few years in Orillia.

Duggan presented Sir Harold and the Legion with plaques, memorializing his service and his connection to motorcycling history.

Across the street, motorcyclists and onlookers applauded.

Before the motorcycle riders arrived, trumpeter Andy Salvatore played The Last Post, in solemn remembrance of the lives lost 77 years ago.

“Today, [Rowden] said the bigger remembrance is the people that were left behind,” Pitman said. “That really hit the nail on the head.”

An estimated 4,400 Allied soldiers died during the Normandy beach invasion – more than 1,000 were Canadians. The attack is viewed as a turning point in The Second World War, driving German troops to retreat.

Linda Battams, a regional commander with the Legion, said she hopes younger Canadians learn about people such as Rowden and their service to the military.

“I want them to remember the veterans,” Battams said, “what they’ve done for us, the sacrifices they’ve made for us, and honour them.”