What is scarier than the fear of losing the global race to vaccinate enough persons before we are overwhelmed by escape mutations?

Every time the virus is transmitted to a new human host it copies (replicates) itself and inevitably makes mistakes (mutations) in this copying process. From some of these mutations a new variant is born. Some of these become variants of concern, meaning they spread faster and cause more severe disease.

The E484K mutation is found in all three global variants of concern (P.1 Brazil, B.1.351 S. Africa, and B.1.1.7 UK). This mutation contains changes to the part of the coronavirus spike protein that our antibodies target when fighting the virus. Thus, it can slip past our immune system defences – natural antibodies acquired from previous infections. It could change its genetic code enough to slip past vaccinations and the antibody treatments we use for patients with COVID-19.

Another mutation in the UK variant, N501Y, has made the virus more contagious, causing a surge in cases when it first appeared. That mutation helps the virus bind to doors on our cells called ACE2 receptors and enter our cells to start their business of replicating.

After you are vaccinated, or after an infection of COVID-19, your body makes antibodies to the virus (an army of soldiers with memory of the virus). Your immune system is smart and has a good memory so if it is exposed to the virus down the road it will mount a defense using these soldiers. E484K is called an escape mutation because it helps the virus escape this standing army. With this mutation, the virus may slip past our immune defenses, making us sick.

Data about the three variants of concern (VOC) are accumulating. People infected with VOC are more likely to be hospitalized, require ICU, and die. As well, patients are younger.

The variant most prevalent in India right now is B.1.617. Reported in late March 2021 (identified in December, 2020) it contains an E484K mutation as well as another mutation called L425R, earning it the title, double mutant. Unlike the three variants of concern, the WHO considers India’s double mutant only a variant of interest, acknowledging that it appears to have higher transmissibility with potential to cause more severe illness and evade vaccine immunity. B.1.617 is reported in 17-plus countries. (GISAID, Global Initiative on Sharing Avian Influenza Data).

But India’s lack of swabbing and therefore gene sequencing data has left scientists and public health officials guessing just how virulent B.1.617 really is. Political rallies and religious festivals and failure to social distance and wear masks have all contributed to the devastating rapid increase in India’s cases.

As nightmarish as the spectre of virus mutations may be, we still have a powerful toolbox to defend and protect ourselves. Vaccines, social distancing, handwashing, masks. Lab studies suggest Covaxin, a vaccine developed in India, appears capable of neutralizing the variant. Public Health England, working with international partners, stated so far there is no evidence that the Indian variant causes more severe disease or renders the current vaccines less effective.

UK Prime Minister Boris Johnson announced that the leveling of new cases and the re-opening of the UK is not a result of their successful vaccinating endeavors so much as it is attributable to the success of lockdown.

Which is where we started. Viruses cannot mutate if they don’t replicate, and they can’t replicate if you socially vaccinate by staying apart, and medically vaccinate widely and quickly, putting brakes on mutations 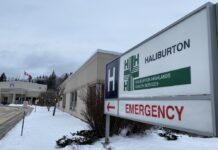 COVID outbreak over at Haliburton Hospital