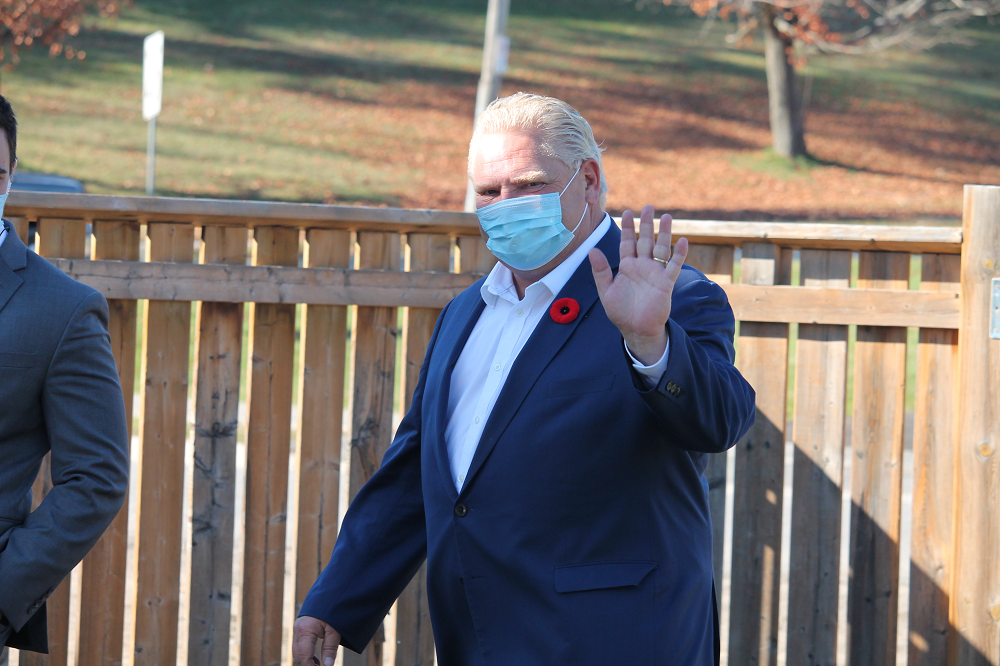 Premier Doug Ford announced $680 million for broadband and cellular connectivity across the province when he visited Minden Nov. 4. But it is not clear how many of those dollars will come locally.

Ford, joined by other officials including MPP Laurie Scott and Minden Hills Mayor Brent Devolin, announced the new funding at the Minden library. He said it’s part of the 2020 budget being introduced Nov. 5 and will go towards “shovel-ready projects” to connect underserved communities.

The new financing is not tied to any specific projects. But Devolin said he is hopeful the dollars could further the Eastern Ontario Regional Network’s proposed $1.2- $1.6 billion gig project, which could bring gigabyte-per-second internet speeds across the region but still needs funding.

“We’ve fully developed a business plan and are ready to go when the commitment from provincial and federal governments make this possible,” Devolin said. “I’m hopeful that this announcement by Premier Ford and his cabinet ministers today will be a piece of a part of a solution moving forward.”

The new funding will be rolled out over six years and is in addition to the $315 million the province has already allotted for its broadband and cellular action plan.

The new funding will also double the existing pool for the Improving Connectivity in Ontario (ICON) program to $300 million. The County is already applying for an ICON grant to bring more fibre connectivity to the area with private partners.

Ford said reliable broadband is critical for everyday life and noted the challenges of 1.4 million people in the province who lack broadband or cellular access. He referred to Algonquin Highlands resident Elaine Cole, who struggles to get consistent connectivity to contact her family. The Highlander wrote about Cole’s plight earlier this year.

The premier added praise for partners like EORN, citing the $213 million project underway to improve cellular service in eastern Ontario, which the province is investing $71 million in.

The funding “will help communities like Minden and Kawartha Lakes get access to their internet and cell service we all rely on,” Ford said. “We will continue to grow and expand our investments with our telecom and municipal partners to make every dollar count. Partners like (EORN), that have incredible track records.”

Scott said the day was a “watershed moment” for broadband and said they hope the federal government will release its universal broadband fund, aimed at supporting broadband projects across the country.

“Ontario has stepped up,” Scott said. “Ontario isn’t waiting any longer. That is why we are taking action today. There is no more important infrastructure project than broadband.”

“COVID-19 has highlighted the necessity for access to reliable, high-speed internet services for all Ontarians,” Devolin said. “More needs to be done. EORN looks forward to continuing to work with the Government of Ontario to help our community.”