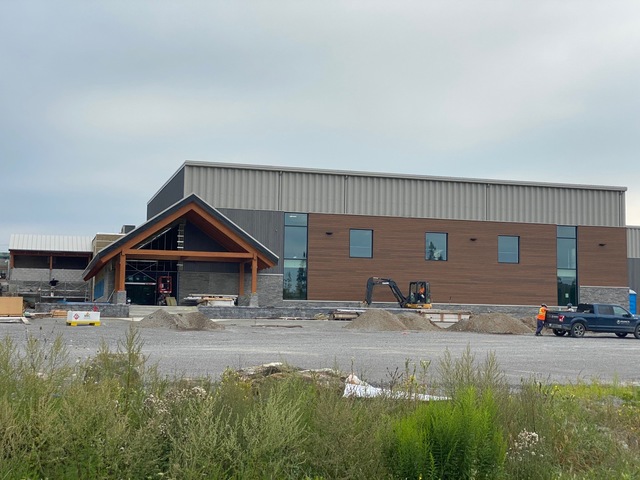 The new arena and community centre in Minden will have a refurbished canteen as councillors continue to slowly make decisions about so-called value-added-items at the $12.7-million facility that is now nearing completion.

CAO Trisha McKibbin had 19 items in a detailed report. A number of them were removed, such as cleaning supplies and equipment, as they would classify as normal township operating costs. Others were shifted to the fundraising committee, in hopes they can get some community donations.

As for an eating option in the new facility, Coun. Pam Sayne said she was in “total support” of having a canteen, whether the township eventually runs it or a third-party contractor does.

Coun. Jean Neville was in agreement, saying decision-making around the arena’s add-ons had dragged on too long. She said they needed a canteen regardless of who runs it. “Without a canteen, it doesn’t work for me.”

McKibbin said she had sought out quotes and estimated the work at $40,000.

As for lobby furniture, Neville added, “we’ve got to get the place furnished.” McKibbin has estimated a price tag of $14,000.

Coun. Bob Carter noted they would need fitness room access control as soon as equipment was installed, especially during a pandemic. He said once they get the equipment in, it needs to be protected and they don’t want unauthorized people in the room. That will cost the township about a further $7,000.

Signage was also approved at an upset limit of about $14,000.

Early on in discussions, some councillors, such as Carter and Jennifer Hughey, said they would want more details before voting on whether to say yes or no to some items.

“We have to understand what we’re agreeing to with all these things because money is money,” Carter said.

Hughey added, “I’m not comfortable voting on anything with numbers that are questionable or potentially incorrect.”

She suggested they make decisions on what they could to be productive on the day.

McKibbin said council also had to provide direction on where the money would come from.

Sayne said, “we look at some of the great ways that we’ve seen other places raise money and get community involvement, such as the youth hub … I think if we can rely on some of that local support these numbers would stay down much lower so we try to do these locally as well.”

Coun. Hughey, who is the council liaison on the fundraising committee, expressed some frustration saying the committee had not been able to meet yet due to COVID-19 restrictions and the township’s inability to provide a venue for electronic committee meetings.

Coun. Neville questioned debenturing, due to low borrowing interest rates. “This amount of money is not going to be significant in the very big picture,” she said.

However, Devolin said they would have to research what items on the list can be debentured.

The original budget for the project was $12,494,570. An additional $250,000 was approved by council in December 2019, increasing the budget to $12,744,570. McKibbin said contractors’ MBC have advised that, based on completed tenders and items that remain outstanding, a project surplus is unlikely. The list of value-added items, if all funded by the township, [of which some will come from Ontario Trillium Founation grants of $150,000] would have added another $518,793. However, council has so far approved just $75,000 of that. A follow-up report will come back to council.