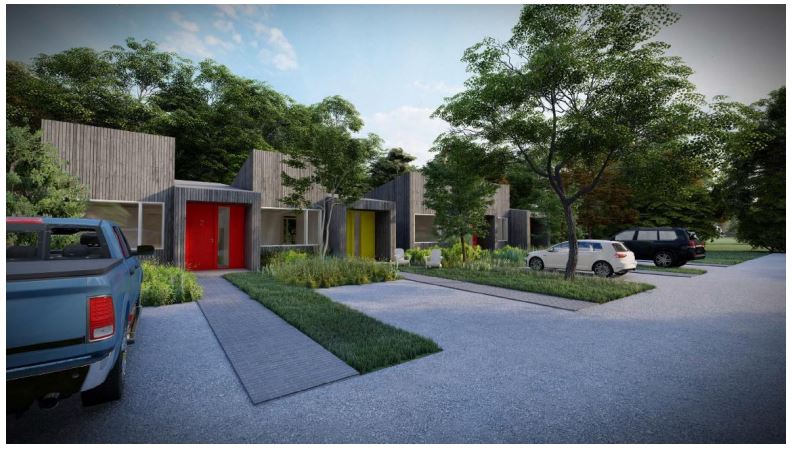 Minden is getting 30 new affordable housing rental units thanks to a public-private partnership between a long-time cottager and the Kawartha Lakes-Haliburton Housing Corporation.

Corporation CEO, Hope Lee made a presentation to Minden Hills council’s Sept. 24 meeting. The private landowner is Bill Switzer, who did not appear during the Zoom meeting. Tim Welch, of Welch and Associates, joined Lee. They are the development consultant assisting with the project.

Lee said KLH’s newest development plan in Minden “is a particularly exciting project for KLH Housing as it will become our first public-private partnership.”

She added that KLH and Switzer, of F.W. Gwillim, hope it becomes a model for other housing in Haliburton County.

The units will be in 15, two-bedroom, duplexes. They are going on a vacant parcel of land on the west side of Highway 35 at County Road 21, between Rotary Park and the Minden Legion overlooking the Gull River. Lee said the accessible units will be approximately 800-square-feet. Each will have parking out front.

“So, this project will nestle nicely into the area with the Gull River as a boundary. The area provides a number of amenities, including Rotary Park and the grocery store.”

“The townhouses will provide 30 units towards the affordable housing targets,” she said. The Coaliton has set a goal of creating 750 new units in a 10-year-period.

Hope added they would be approaching the County of Haliburton “looking for rent supplements to make some of the units even more affordable for those with the lowest income.”

All in, she said the capital cost of the development is $6.8M

“It’s important to highlight the significant contribution of Mr. Switzer towards this project,” she said. “Without his support, including the land, this project would not be possible or considered. A long-time seasonal resident of the County, Mr. Switzer has owned this parcel of land for many years. This project is not only his dream for the land but his way to give back to this community.”

She said Switzer would be involved in the development of the project, but it would then be transferred to the corporation, which will become the owner and operator.

She asked for the township’s planning help, including official plan amendment, rezoning, donation of a road allowance, site plan approvals, relief from fees and charges and waiving of securities. Council unanimously consented.

“While we realize this property wasn’t necessarily considered in the past for residential development, we hope that you will agree with us that it is possible and will meet a significant need,” Lee said.

She said official plan and rezoning paperwork is with the township and they’ve completed topographical and geotechnical studies to confirm suitability of where they are placing the units on the site. They are just waiting on a traffic study.

If all goes according to plan, construction would begin in April 2021 and people move in, in the spring of 2022.

Coun. Bob Carter, who’s on the housing task force, said they’d been involved since 2018 and, “we’re really excited to see it come to fruition.” He said he’d spoken to some of the neighbours, and other groups within the municipality, and, “for the most part, right across the whole township, people are excited about this project.”

Coun. Pam Sayne, who is also on the housing task force, said she likes the fact it’s mixed income development.

Mayor Brent Devolin said the public-private partnership model “is potentially an answer to some of the challenges” that the County has had with affordable housing residential development in the past.

Coun. Ron Nesbitt added, “Minden deserves this and needs this.”