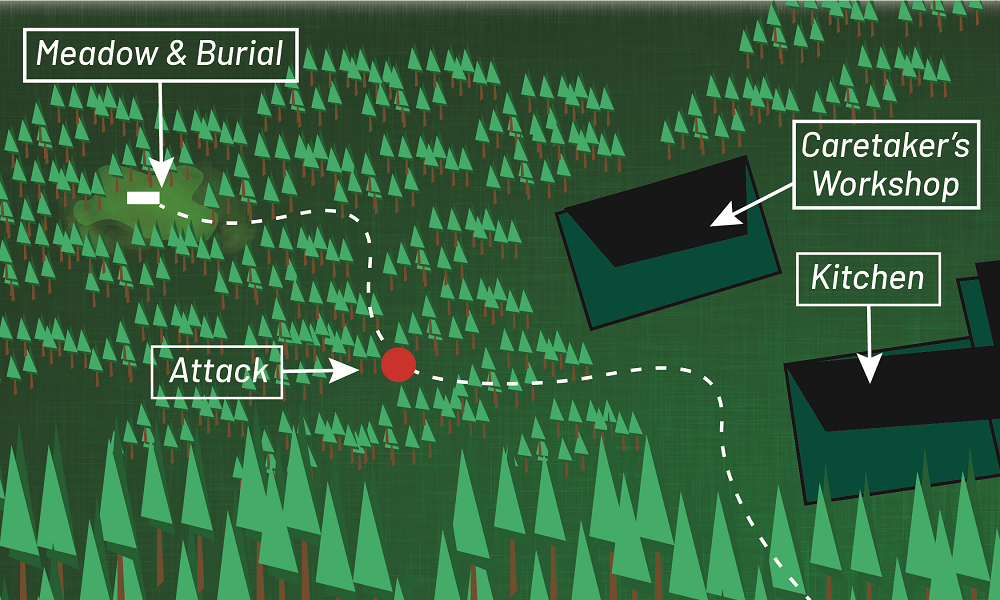 “You cannot see him,” the nurse said to Detective Harry Harp and Constable Terry Becker. “He’s having tests.”

After driving to the Golden Villa Retirement Centre to see Stanley Barley, they had discovered that the old man had been admitted to hospital earlier in the day. Harp asked the nurse how long they would have to wait.

“Take a seat,” she said wearily.

The two men sat down in the waiting area and Becker flipped open a fishing magazine. Harp leaned back and let his thoughts drift to Brigitte Cave, the librarian he’d met two days earlier. He couldn’t get her out of his mind. And then he wondered if that was how Rand felt about Irene Barley.

But did it happen that way? Did Stanley Barley catch Rand Carlyle with his wife and then murder him in a jealous rage?

Goofy music interrupted his thoughts. Across from him, a boy played an electronic device, thumbs jabbing frantically. Next to the boy sat a whitehaired man whose leg was in a cast, and in the corner, two men sat close together, both looking at their phones and talking quietly. Harp considered their neat hair and fitted clothes and the lines in his forehead deepened. Then he remembered the numerology project—begun by the original detective on the case, George Maclem. The gender tally for the night of the murder was 12 men and 10 women. If everyone paired up, two men would be left out. Suddenly, an unmistakable feeling of clarity filled Harp’s mind.

Harp and Becker rushed to the nurse’s station and she looked up at them suspiciously. “So, which one of you officers is Adam Barley?”

Harp said, “Neither. We just want to talk to him.” “First the father, now, the son.” The nurse rolled her eyes. “Make up your minds.”

Suddenly, Harp remembered his revelation and turned to Becker. But at the same moment, a door opened behind where the constable was standing. It was the door to the men’s room and a man stepped out. He was tall and thin with white-blond hair. He walked around the two detectives.

“I’m Adam Barley,” he said to the nurse.

She looked up. “Doctor wants to see you but he’s just this minute been called into Emergency.” She nodded over his shoulder. “And these gentlemen here….”

“Mr. Barley?” The detective introduced himself and Becker. “Could we have a word?”

Harp directed him to a private alcove away from the main waiting area.

“What’s this about?” Adam Barley said with undisguised nervousness.

“When did you last see your father?” Harp said.

Barley looked surprised. “Years ago. We’re not that close.”

“Why? What happened?” Becker said.

“I worked at Pines End. My parents got me the job. And I hated it.”

“What was so bad about it?” Becker said. “I was 16 and I had to wait on guests my own age. It was humiliating.”

Becker said, “We know you took him fishing. You must have been friendly with him.”

“My job was to do what people asked— get towels, drinks, take them fishing, whatever.”

Harp was silent for a moment. “What do you do for a living, Mr. Barley?”

“No,” Barley said. “I live alone. Now, if you’ll excuse me, I have just driven six hours and I’d like to see my father.”

Barley scowled. “I don’t remember. Probably fetching drinks for people! It was Simcoe Day. There was a bonfire, I remember that.”

“No!” Barley cried then took a breath and spoke calmly. “I don’t remember.”

To Harp, the man was somehow incomplete as if something had stunted his growth. The detective wondered if it was the truth. “Mr. Barley,” Harp said. “I believe you knew Rand Carlyle extremely well. In fact, I believe you knew him— intimately.”

Barley launched from his seat. “I am not going to sit here being accused of— indecency!” He turned to leave but Becker was on his feet blocking his exit.

Barley stared at the young constable’s hand then sat down.

“Look, I knew Mr. Carlyle. And I liked him—though certainly not as you suggested.” He ran his hand over his face. “He was a lot nicer to me than those kids. He was kind.” The man looked up. His face was filled with confused emotion. “He didn’t deserve to die!”

Harp’s eyes glinted. “But his killer thought differently. His killer was filled with so much ferocious hate that he drove an ice pick into Randolph Carlyle’s back.”

“Then buried his body in an old fridge in a little meadow in the woods.”

Adam Barley’s face softened as if remembering something long forgotten.

“I believe your father saw you and Rand together and that drove him to kill—.”

Barley leapt to his feet. “NO!”

Just then, the nurse rushed towards them. “Mr. Barley? Come with me.” She waved at him. “Your father’s taken a turn.”

A few minutes later, Adam Barley stood beside his father’s hospital bed. A breathing mask covered Stanley Barley’s face and tubes and wires crisscrossed his body. Adam looked down at him and thought about what the detective had said.

Adam Barley was well aware that guests would be asking for drinks and that the hateful Cat Wilson would be whistling for him and that he had to collect wood for the bonfire and do a million other things. But he didn’t care because, he, Adam Barley, was in love.

Turn at the boulder then over the fallen tree and up the slope. He knew the way to the little meadow by heart. He also knew that Rand was already there because he could smell his cologne.

Pushing aside bushes, he stepped into the sunlit meadow where Rand lay waiting.

Adam joined him and they stared up at the sky. Except for the sounds of insects and rustling leaves the forest was silent. Then a twig snapped.

“What was that?” Adam whispered, eyes wide.

Rand pulled him close. “That’s the sound of my heart beating crazily for you.”

At the edge of the meadow, a woman peered through the bushes. Her face was twisted by horror at the sight of what Randolph Carlyle was doing to her boy— her dear sweet boy.

Irene Barley’s eyes narrowed as she realized what she had to do.