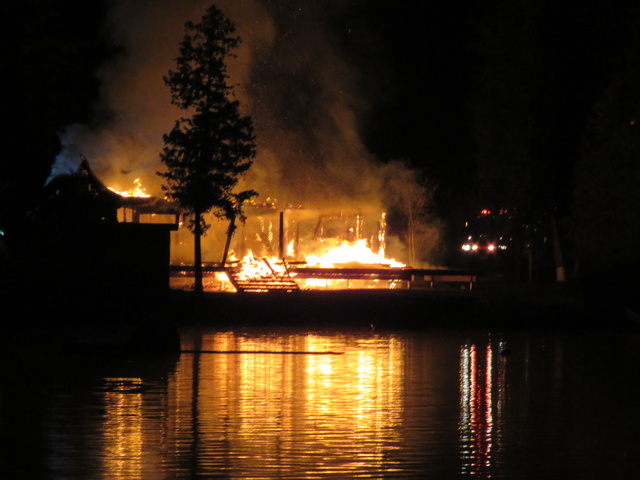 Julia Lewis said she was awoken in the middle of the night July 30 by her daughter, who had heard sirens.

Overlooking Boshkung Lake, Lewis said, “We looked outside and the whole bay was lit up by flames.”

A cottage under renovation “was fully engulfed and the firefighters were already there.”

She said Stanhope volunteer firefighters did a great job of preventing the fire from spreading to any other buildings, but the cottage was unfortunately lost.

Algonquin Highlands fire Chief Jonathan Wilker said on July 31 that his department got a call around 2.30 a.m. July 30.

“Someone from across the lake saw the fire,” he said. He added they didn’t know what the exact nature of the call was and paramedics were first on scene followed by volunteer firefighters.

They soon knew it was a structure fire. He said it was a cottage under renovation with no contents. He said the owners were not home and there were no injuries.

He confirmed that upon arrival, it was fully engulfed. He said volunteers were able to set up a pump on a dock on the lake to draw water and took about one hour to extinguish the blaze – but the building was a complete loss.

The cause of the fire remains under investigation.