Two officers held up their phones and showed Harp evidence that the shore path had been used recently—broken branches, stirred-up pine needles, impressions of shoes. All roads lead to the point, thought Harp.

Becker notified everyone to assemble for a re-enactment of the previous night’s events. Just after 7:30 the cottagers arrived and assumed the approximate spot they had been in during the fireworks.

Bob Mackenzie-Wilson stood on his dock and Ariel and Heather Froome sat on chairs next to Heather Mackenzie-Wilson. Heather’s boys sat at her feet. In their canoe, Sally and Nibbles drifted to the left of the dock— to suggest their actual position by the point. Harp had requested the Maladees’ presence and their speedboat bobbed to the right of the dock. Gill’s boat was steady between the two and near the Calvert property line, Grace sat in her boat—away from the group but close enough to hear. Everyone waited in uneasy silence.

“Can we get this started?” Bob snapped.

Harp and Becker stood on the dock facing opposite directions—Becker eyeing the water-bound guests and Harp the others onshore. The detective smiled.

“Thank you all for your patience. We just want to make sure we understand where everyone was last night. As we proceed, speak up if you recall any changes around you. We’re looking for the truth.”

Harp winked at the two kids.

“Easy—right guys?” They grinned, all ears.

“Marc and Marie, you were in the city, correct?”

“And Grace, you were on the path in the woods.

And Frank, you’re at your cottage. It’s 11:00 and Bob lights the first firecracker.”

“Spiral Daisy,” he said, looking at his watch, bored already.

“Stop,” Ariel interrupted. “Mimi, I think you went to use the bathroom at this point.” Mimi’s eyes darted and she forced a smile. “Yes.”

“Stand up and step a few feet away, please,” Harp said to her then signaled Bob to continue. “Cherry Bomb, Symphony of Colour—.”

Becker said, “Nibbles? When did you see the light in the trees?”

“Cherry Bomb, of course,” Bob said. “Jerk,” he added under his breath.

“During that one,” Nibbles said, “For sure, man, and right there.” He pointed at the Calvert shore then turned to Sally and whispered, “Right before we—.” Sally hissed, “Shut up.” He looked at her, hurt, then turned away.

“So. Someone was in the woods and turned on a flashlight.” Harp spoke slowly and let his words sink in. He asked Ariel. “Is Mimi still in the bathroom?” She nodded then glanced at her wife.

“We just want the truth. Simple, remember?” Harp said. The group stared back at him. The minutes ticked by. In their boat, Marie started to cry and Marc patted her on the shoulder. She flinched. Harp noticed and said, “Time for the truth, Mr. and Mrs. Maladee. We know you were on the lake last night. We saw the sparklers you bought in town yesterday. Were you on your way to the point? Wanted to have a word with Ida? Is that it?” Marie stifled a wail. “You’ve upset her,” Marc said sternly.

“TELL THE TRUTH—,” Marie screamed. Everyone turned, eyes wide. Marc gulped, looking between his wife and the waiting crowd. “Fine—we just went to have a word with her.”

“YOU’RE LYING!” Sally screamed. Harp pointed at Sally. “Ah—that light was a signal for you to paddle around to the Calvert dock. To meet on the point and to kill an innocent woman.”

“WE JUST WANTED TO TALK TO HER.” Mimi cried.

“But—she was already dead.” Someone gasped. “That’s right,” Marc said breathlessly. “Someone had bashed in her face.”

The group shifted uneasily. Bob scowled. Mimi fidgeted. Ariel rocked, eyes closed. Heather looked out at the lake. The boys kept their eyes on Harp. On the water, the boats bobbed silently. A mosquito drilled into Harp’s forearm.

Marc snapped, “Are we done here?”

Harp ignored him. Hot, rustling silence filled in around them—until it was broken by a nasally voice Harp had never heard. The voice said, “You went away.” The detective looked around. Another high-pitched voice murmured in agreement. All eyes turned to the two boys sitting at Heather’s feet. They pouted, eyes cast down.

“When was this?” Harp demanded. “Before,” the two boys said in unison. “Before—the fireworks?” Becker said. The kids nodded. Heather looked out at the water. Her skin had taken on a blotchy paleness. Harp felt his heart banging in his chest. The group’s eyes turned on Heather.

Suddenly, Marie Maladee cried, “…You’re bleeding.” Heather gasped. A dark stain oozed through the left knee of Heather Mackenzie-Wilson’s yellow pants. She quickly placed her hand over it but the pressure made a thick line of blood roll from under the cuff of her pants and run down her ankle. Pain, knee, recent—Harp’s eyes shot open.

He said, “You hit your knee? …You hit your knee—on Ida Calvert’s steel bed frame—after you killed her with the log! You had to hurry back before the fireworks started. It was dark in her room. You couldn’t see. After what you’d done—you panicked and hit the sharp, steel corner.”

“GARBAGE!” Bob folded his arms over his oiled belly. Harp pointed across the lake. “The boat launch is clearly visible from here. You saw Grace and realized her boat was gone and that she’d have to walk. You knew this was your chance, isn’t that right, Heather?”

Her face twitched. She rubbed one foot against the other to clear the blood but instead, it spread over both feet.

“Isn’t that right?” Harp said quietly. Bending down, she wiped ineffectually at the blood, smearing it on her hands, too.

“Bob always wanted the point. … Always. Every single day all I hear….” She mimicked her husband’s booming voice, “‘Forget this place. I want the point!’” She looked up at Bob. “Now you can have it.”

“Oh…Heather,” Bob gasped. She stood up and limped towards him, her voice cracking. “I just want you to be happy. Having the point will make you happy. And if you’re happy—well, you’ll be nice to me.” She held up her bloodcovered palms. “…You’ll be nice to me, won’t you, Bob? Say you’ll be nice—.” Just then her knee gave way but he caught her in time and held her in his arms. The two kids clung to their parents and they all cried—but not Heather. Her eyes were closed and a peaceful smile had settled on her face. 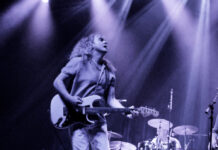 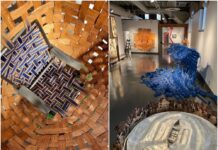