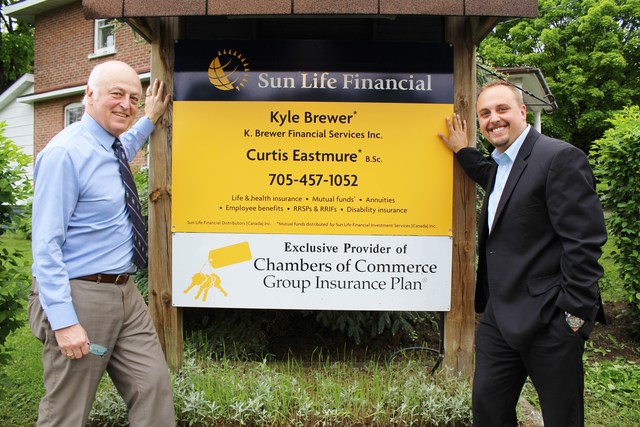 Recently-retired Sun Life financial advisor Curtis Eastmure recalls delivering a $1 million life insurance cheque to a client after his wife died – even though the policy had only been in force 14 months.

Eastmure said the client was embarrassed to take it, since the policy was so new. But Eastmure told him he had signed a contract with Sun Life, and he was very proud to give him the money.

The client told him to photocopy the cheque, black out the name and use it is a motivation story.

“I will miss that,” Eastmure says of his interaction with clients over a 27-year career. Most people would know him as a Sun Life advisor and through his work with the Chamber of Commerce group insurance plan. He finished up on Dec. 31, 2019.

During that long career, he said without a doubt the most important aspect was selling life insurance “since it makes the most difference in people’s lives if tragedies happen.”

While it’s only been a month, Eastmure said he has slipped easily into retirement. He had just gotten off the curling ice when The Highlander rang. He’s been a volunteer for years and now has more time to do that. He helps out at Abbey Gardens, with the Haliburton Fine Arts Society, occasionally takes the stage of the Highlands Summer Festival and does ski patrolling. He and wife Brenda love to ski and do two trips a year.

He said he was ready to quit the day job. When Kyle Brewer took over after Sean Hagerman passed away about five years ago, Eastmure, now 69, told Brewer he’d give him four years and that ended last April. He noted that Brenda has been retired for seven years.

He said the insurance and investment industry has changed a lot since he started in 1993, with heightened compliance and “astronomical” amounts of paperwork.

Leaving now, he is confident that clients – many of whom have become close friends – are going to be well taken care of with the likes of Chris Salmans, Kyle Brewer and Abby Blythe-Luck. “My clients are going to be just fine.”

Brewer remarked on Eastmure’s “constant striving for honest and hard work and making sure clients’ best interests are always forefront.” He said they’d miss him and his stories but “we’re excited for his next phase of life for sure.” Brewer is also enthusiastic about the recent addition of Sean’s daughter, Abby. He commented she already has a lot of relationships locally that will be enhanced by the work she and The Sun Life office does. He said her ability to relate and empathize with clients “is better than most.” He is looking forward to watching her develop into a successful young businessperson.

Eastmure said losing his business partner and friend, Sean, was one of the most difficult times in his life. He recalled writing his resignation to Sun Life and, “It was certainly poignant. Sean never got a chance to write this letter and I did.”

Barbershop serving brews with a trim