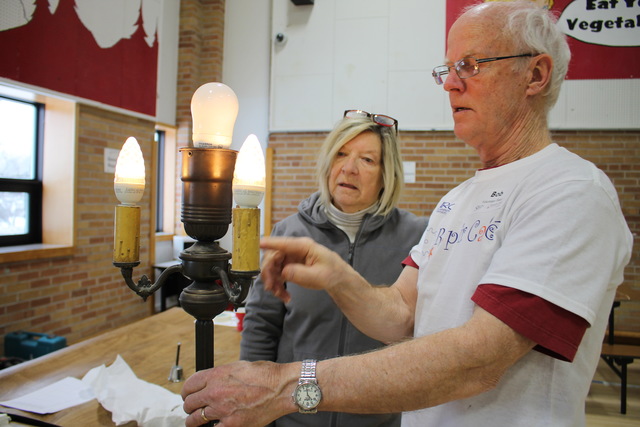 An excited Carrie Pearce, holding an antique pole lamp, was one of the first through the door at the repair café this past Saturday in Haliburton. Pearce said the lamp held sentimental value because it came from a cottage she and her late husband rented.

“He loved it and restored it but it doesn’t work,” she said as she made her way to one of the fix-it stations inside the high school gym.

“I think it’s fabulous,” she said of the SIRCH initiative birthed with help from Environment Haliburton! and an Ontario Trillium Foundation (OTF) grant.

“I wish there was more of this. So much stuff is going to the landfill.”

At one of the general repair areas, Pearce was met by volunteer Bob Hudspith. He explained he’s had lots of opportunities to do handiwork and he’d always been comfortable using tools. When he saw the poster looking for volunteers, he concluded it was something he could do.

As the two worked on the lamp, an official ceremony marked the launch of the inaugural café with Haliburton-Kawartha Lakes-Brock MPP Laurie Scott, along with SIRCH executive director Gena Robertson, repair café coordinator Chris Varga and volunteers.

Scott represented the OTF at the opening. She gave “a shout out” to the once-a-year application program encouraging people to apply since “it all helps our community.” She added the day was about reduce, reuse, recycle and repair.

Robertson said OTF funding allows organizations such as hers to try new programming. She noted it was launching in a rural and remote community so “if it goes here … it will go anywhere.”

Varga thanked the numerous fixers who had volunteered their time, offering everything from wood and furniture, to general repairs, computers, small appliances and electronics, clothing and cloth, and jewelry. As a fixer and environmentalist, he thanked SIRCH for the opportunity.

“This is amazing. This is the start of it.”

At the end of the day, Varga said 48 repairs were attempted; 26 were a success; 16 needed parts and will be fixed at a later date; one could not be tested and four could not be fixed.

“We achieved a very respectable 54.2 per cent repair rate and 33.3 per cent can still be fixed. “That is an amazing outcome. Even if we don’t get more than 54.2 per cent, that is still over 50 per cent less stuff going to landfill. And in the process, we shared knowledge, had fun and got to know our neighbours.”