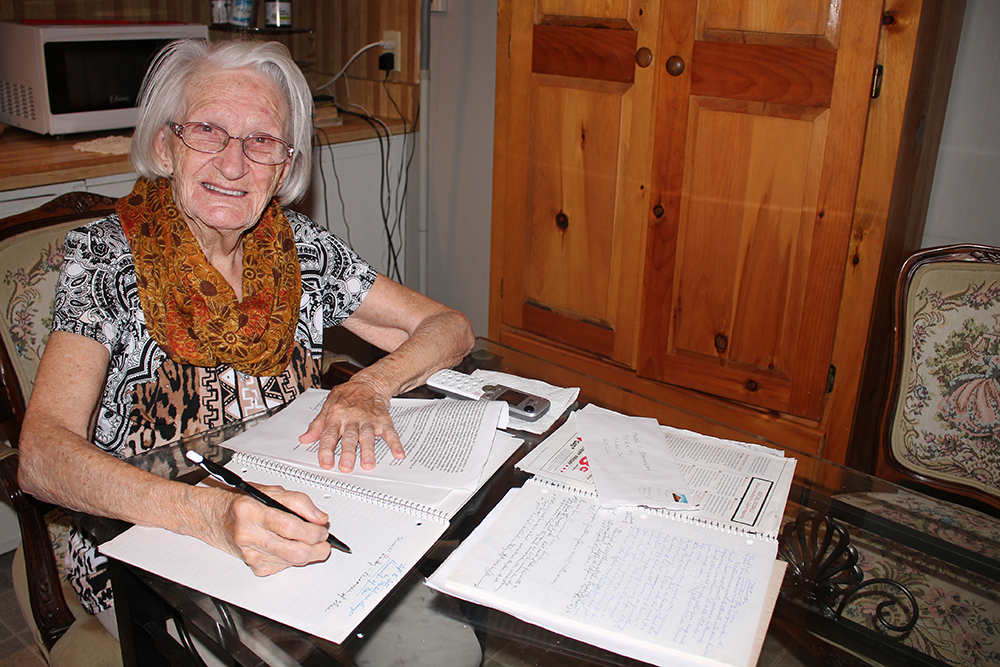 Mabel Brannigan sits at her dining room table in Minden, hunched over a writing project she has embarked upon. It will honour local veterans during the 75th anniversary of the end of the Second World War in 2020.

The 96-year-old war veteran, for whom the Minden Legion is named, is a little over half way through the stories she is penning about Haliburton County veterans. She hopes to be done by the end of the year.

She is calling it the ‘Left to Tell’ series since there aren’t many of her vintage remaining.

“I have to do this to pay tribute to these boys, and a few girls, from Haliburton County,” she tells The Highlander – which will be publishing her series in the lead-up to Remembrance Day 2020.

“I am in my 96th year,” she continues, “and I remember most of the boys. All or nearly all have died.” She emphasized it’s important to her to write about these “courageous” people. “They gave their today for your tomorrow.” She said we all owe them a tremendous debt of gratitude.

She said writing the articles also saddens her since all of them are gone. In a 2016 video, as part of The Highlanders’ Veterans of Haliburton County series, Brannigan said, “They’re all gone. I’ve got no friends here of my age.”

The writer hands over a sheet of paper, in black ink, the lines running slightly up and to the right but exceedingly legible for a woman on the cusp of 97 years.

“No matter what their motivation, the men and women in our armed forces were willing to put their own lives at risk for an ideal,” the paper reads. “They believed in the value of what they were doing. They faced incredible hardships, witnessed events that no one should have to witness and pushed themselves to the limit of their endurance.”

2020 also marks the 75th anniversary of D-Day, when thousands of allied troops mobilized on the beaches of France. Canada’s part was mainly on Juno Beach, suffering heavy casualties.

“But they knew it must succeed,” said Brannigan. “If it didn’t, what would?”

She noted how Canadians today are welcome with open arms in Normandy and in countries such as The Netherlands where Canadians played a vital role in freeing them from Nazi occupation.

“Many from Haliburton served and died in Italy, too,” Brannigan noted.

“We honour the courage and sacrifice for those who secured freedom for all of us. Lest us forget.”

While she doesn’t want to talk about her own service, insisting on paying tribute to those she is writing about, Brannigan went to Yorkton, Saskatchewan as a teenager and was then stationed in Ottawa.

Cottagers with ties to County relieved at election result