“A lot has happened since our last visioning session in January 2018,” said CAO Angie Bird in a memo prior to the six-hour meeting. She added, “This is our opportunity to collectively imagine the future, discuss the current challenges we face and develop some priorities to ensure a successful next three to four years.”

Mayor Carol Moffatt said it was a chance to look for staff and council commonality on the major elements of their strategy for the remainder of the 2018-2020 term. She said they also wanted new councillors, Jennifer Dailloux and Julia Shortreed to have a couple of months under their belts before reconvening.

After the session, Moffatt said councillors and staff were “like cattle facing in the wind. We are all aligned. There is not a great divide as to what staff and councillors think we should be doing for our community, so it’s nice to see that.”

She said the first priority is a continued focus on a robust environmental strategy. She noted that included public education and a zoning bylaw update that considers all environment factors: including landfills; waste management; lake health; shoreline preservation; fisheries; and participating in the county’s climate change strategy.

Number two is infrastructure, which ties in with the asset management plan. She said that conversation drifted into how they manage grants. While the township has been successful in winning grants over the past eight years, it has largely fallen to one staff member. Moffatt said there was talk of possibly contracting out grant management. They’ll also be looking at the results of their energy audit and an energy management plan.

A third priority is around human resources. The mayor said they value staff but want to make concerted efforts around retention and “ensuring opportunities for people to bring their best game to the job.” For example, she said when a staff member completes a course and receives a certificate, that should be acknowledged.

The fourth plank from the session is a continuing strong communications strategy, the mayor said, including “making sure that we are communicating our work adequately and usefully.” They also want to ensure constituents can engage with the township and provide feedback.

Moffatt said the sixth and final priority circles back to volunteers, including review of committee mandates and training. “So, volunteers have the right tools and resources to bring their best game forward.”

The mayor said the results of the session are “nothing earth shattering at all,” but there was “a whole bunch of stuff that last year came from our visioning session, and were introduced into our way of doing things.”

Moffatt said they also revisited their vision statement and she insisted they add the word “responsive” because “the landscape is continually changing, and changing quickly.”

One of the biggest challenges for local townships is that the population is growing at a greater rate than the provincial average, resulting in a greater use of infrastructure and services. In some cases, it is requiring the hiring of additional staff. Moffatt defending the hirings, saying, “no one is sitting around playing cards, waiting for the bat phone to ring.” 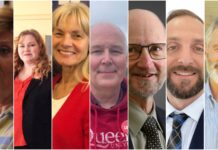